Genomics is helping us choose the right medication at the right dose for each patient. 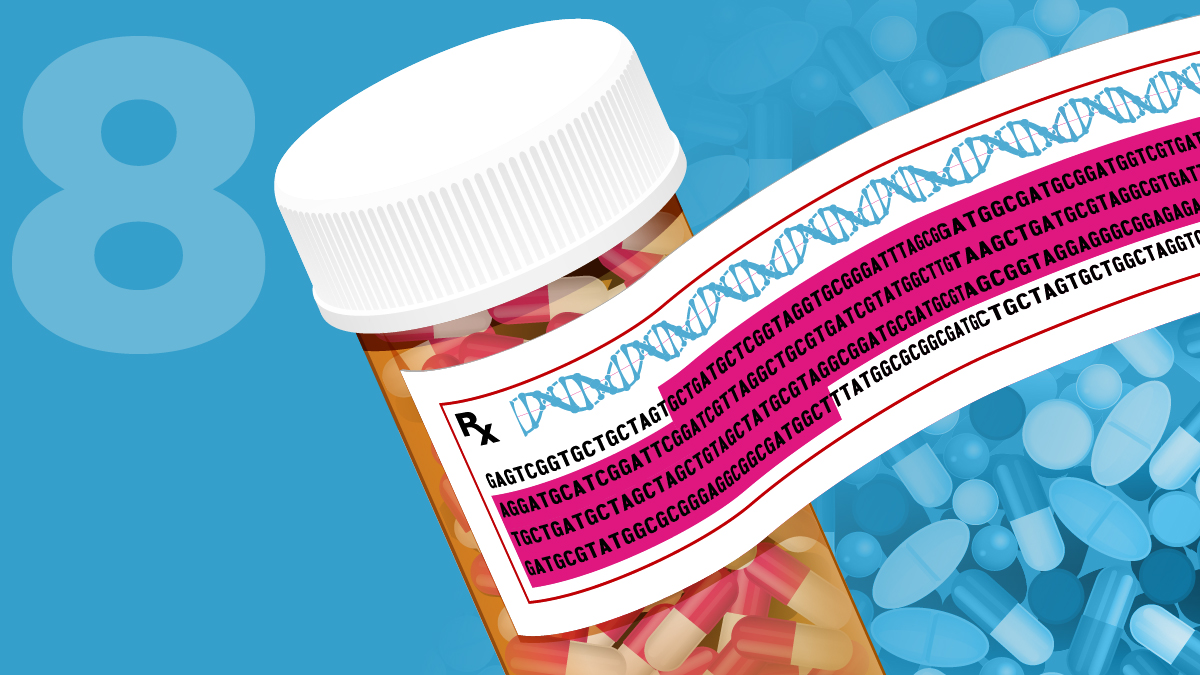 Did you know that the sequence of your genome can determine how you respond to certain medications? Understanding pharmacogenomics, or tailoring a person's medications based on their genome, would not be possible without sequencing the genomes of many people and comparing their responses to medicines.

One of the most important uses for DNA sequencing is not to just sequence one human genome - but rather to sequence many human genomes to understand how genomic differences relate to different traits. Some such traits reflect physical characteristics (like eye color), whereas others can be used to help in the clinical care of patients. Scientists in the field of pharmacogenomics study how specific variants in your genome sequence influence your response to medications.

In order for our bodies to use some medicines properly, the cells in our bodies must make a few chemical changes that convert them into an active form, just like we do when we eat food. Then, these active forms of the medicine must get to the right places in the body or inside cells to do the job that we want them to do. If we want to make sure this happens, it makes sense that we would target our bodies' pathways involved in changing the medicine's form or in getting medicines to the right places. For example, you probably know someone who takes an antidepressant. Many of these medicines get to the right places by interacting with a protein called ABCB1, which works like a traffic cop on the outside of your cells.

Given ABCB1's important role in controlling traffic, you might imagine that if someone has a genomic variant that changes the shape or function of their ABCB1 protein, they might have a different response than usual to any number of medicines. We now know that is the case for some antidepressants, as well as other medications like statins for cholesterol and certain chemotherapy medicines. As a result, there are at least 18 pharmacogenomic tests for variants in ABCB1 listed in the NIH's Genetic Test Registry, with suggestions that you be tested for these variants to help determine the correct dose for certain medications.

Healthcare professionals and researchers are constantly seeking both to optimize medical treatments and to avoid adverse (or negative) reactions to treatments, which are estimated to affect between 7 percent and 14 percent of hospitalized patients. This makes adverse reactions a large cause of added days spent in a hospital, and the fourth leading cause of death in the United States.

One scary example of such an adverse reaction is Stevens-Johnson syndrome (SJS), a severe allergic reaction also called "scalded skin syndrome." It can be caused by infections, but also by very common medications like ibuprofen, anti-seizure medicines, or antibiotics. Patients may go from taking two pain pills to ending up in the hospital burn unit fighting for their lives if SJS progresses to a worse condition called toxic epidermal necrolysis (TEN). TEN is diagnosed when patients have shed at least one-third of the skin off of their bodies. Needless to say, anything we can do to prevent this allergic reaction is vitally important.

In Taiwan, married scientists Wen-Hung Chung (a physician) and Shuen-Iu Hung (an immunologist) noticed that SJS/TEN was much more common in patients taking carbamazepine, used to treat epilepsy and seizures, or allopurinol, used to treat gout. They showed that this was due to genomic variants in the HLA-B gene. Not surprisingly, this gene helps control the immune response. As a result of their work, the country of Thailand has implemented genomic testing before these medications are prescribed. The results of this "pharmacogenomic test" are used to decide whether it is safe to give a specific patient certain medicines, like carbamazepine or allopurinol. Thailand's government even covers the cost of this testing, and the frequency of SJS/TEN has been drastically reduced. We have since learned that different ancestries are associated with different HLA-B genomic variants, so countries may need to take different approaches to monitor which medications are most likely to be linked to SJS/TEN.

Understanding pharmacogenomics would not be possible without sequencing the genomes of many people and comparing them, and then comparing their response to medicines. But we have also learned that a person's genome sequence is not everything when it comes to medication responses. The human body is a very complicated machine, and the instructions written in our DNA are just part of the process.

There are some cases, as with the breast cancer treatment tamoxifen, where a small study showed that there might be a relationship between someone's response to the medicine and a variant in the CYP2D6 gene. However, this finding did not appear to be true in a larger study that involved many more people. That's why at this time, the U.S. Food and Drug Administration (FDA) labeling for tamoxifen does not recommend CYP2D6 pharmacogenomic testing, but the issue is still being reviewed as more research is conducted.

Another gene in the same CYP family, called CYP2C19, has variations which affect how your body can use clopidogrel (more commonly known as Plavix). This medication is a "blood thinner" which helps prevent blood clots, and thus reduces your risk of strokes or some heart attacks. If your CYP2C19 protein is not working properly due to a mutation in the gene, then you will not be able to process clopidogrel, and you need either a different dose or a different medication. As it turns out, these variants in CYP2C19 are also more common in those with Asian ancestry. Although testing for variants in this gene is also not routinely recommended, you may wish to speak with your healthcare provider about the test if you are given a prescription for clopidogrel, particularly if you have East Asian family members.

As the field of pharmacogenomics develops, more and more clinical trials will test for interactions between our genomes and the medicines we take. If you are interested in participating in such trials, you can search the ClinicalTrials.gov registry and look for ongoing studies with your condition. If you are curious whether any of your medications are known to be associated with pharmacogenomic information, check out the Pharmacogenomics Knowledge Database and speak with your medical care team. And, if you'd like to be part of a national effort along with one million other people that will involve pharmacogenomics research, look into the National Institute of Health's All of Us program.