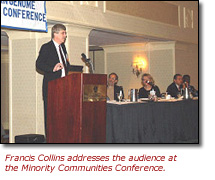 Barbara Fuller and Monique Mansoura of NHGRI worked in collaboration with leaders from the Zeta Phi Beta National Educational Foundation, the National Human Genome Center at Howard University, and the Family Life Center Foundation of Shiloh Baptist Church to plan and coordinate this event.

Attendees arrived eager to learn about the current status of genetics research and its future implications. Dr. Francis Collins and Ari Patrinos kicked off the conference with informative and thought-provoking keynote addresses. Monique Mansoura served as moderator for a plenary session entitled "Eliminating Health Disparities and Addressing Minority Access to New Genetic Treatments." Experts on the panel talked about the disproportionate number of minority members contracting diseases like hypertension, prostate cancer and diabetes and discussed how genetic advances can improve preventive measures, detection techniques and treatment standards.

The ethical, legal and social issues surrounding genetics research are far-reaching and were discussed at length, throughout the conference. Session speakers and participants repeatedly focused on the question: "So now that we have all of this information, what does it mean for me, my family and my community?" Hence, many of the workshops explored issues such as the fair use and privacy of genetic information, genetic testing and the importance of culturally appropriate health care for minority communities.

One of the highlights of the conference was the NHGRI exhibit staffed by Geoff Spencer and Monique Harris who provided informational handouts about the Human Genome Project and educational opportunities at NHGRI. Also at the booth, a group of genetic counseling students: Chieko Tamura, Kira Apse and Elizabeth Lardy, led by Sarah Gollust, an IRTA in the Medical Genetics Branch, set up a taste-testing and tongue-rolling exhibit. People visiting the booth got a chance to see if they could roll their tongues and took turns tasting different substances. Some people could roll their tongues and others couldn't. Similarly, some attendees could taste the bitter and sweet compounds and others couldn't. With these activities, the students generated interest in genetics by demonstrating that even some of the least expected human characteristics are inherited.

On Saturday evening, the conference "Town Meeting" was held at the Family Life Center at Shiloh Baptist Church and was moderated by Charmaine Royal, principal investigator of the GenEthics unit at the National Human Genome Center at Howard. Over 50 members from the community turned out to raise issues, express concerns and ask questions of a panel that included Francis Collins and Georgia Dunston. The discussion included a lengthy dialogue about the implications of the finding that any two individuals in the world share 99.9 percent of their genome with each other. As one gentleman put it "that remaining 0.1 percent must be working overtime to cause the differences I see and that are causing a heck of a lot of problems." Other issues raised included the role of community and religious leaders to further encourage and engage members of minority communities to become more active in ethical deliberations and policy activities related to genetics research.

The conference concluded on Sunday with two services and a reception at Shiloh Baptist Church hosted by Senior Minister, Reverend Dr. Wallace Charles Smith and Dr. Morris Hawkins, President of the Family Life Center Foundation at Shiloh and Professor at Howard University. The sermons were delivered by Reverend Dr. Isaac Mwase, Associate Professor of Philosophy and Ethics at Ouachita Baptist University and Preacher Reverend Dr. Cain Hope Felder, Professor of Biblical Studies, School of Divinity at Howard University. It was a unique occasion to hear the Human Genome Project discussed from the pulpit of a prominent African-American church in Washington, D.C.

Dr. Collins was given the chance to address the congregation and discussed the unfortunate walls that have arisen between the worlds of faith and science and the often confrontational manner in which these perspectives are framed. He described his personal views on the compatibility of the spiritual and scientific worldviews, explaining that both are real and both have true meaning. He concluded by encouraging faith communities to become further engaged in helping to address the ethical, legal and social challenges that are posed by advances in genetics research pose.