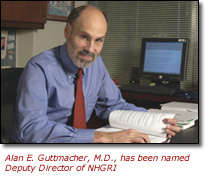 BETHESDA, Md. - Alan Edward Guttmacher, M.D., has been named as the second deputy director of the National Human Genome Research Institute (NHGRI), the institution responsible for leading the Human Genome Project (HGP). Dr. Guttmacher brings an extensive clinical genetics background to the HGP at a time when researchers are beginning to translate the information contained in the nearly completed human genome sequence into medical advances.

"It's wonderful for NHGRI to have Dr. Guttmacher as its deputy director," said NHGRI Director Francis S. Collins, M.D., Ph.D. "Alan is an exceptional medical geneticist and has been a valuable advisor to the institute. His ability to see how genomic medicine can be applied in the clinical setting and his passion as a physician will be a tremendous asset in taking NHGRI into a new era of applying the fruits of the Human Genome Project to improved human health."

As the NHGRI deputy director, Dr. Guttmacher will play a lead role in integrating genomics into medical practice, will help NHGRI develop new research tools to translate the findings of the HGP into new diagnostic tests and therapies, and will oversee strategic planning for the institute and its impact on the field of genomics.

"I miss clinical care," Dr. Guttmacher said, "but I know that I can make more of an impact on the nation's health now than I could in my prior role. Being at NIH has given me the opportunity to reach more people than I ever imagined."

Dr. Guttmacher came to NHGRI in 1999 as the Senior Clinical Advisor to the Director - a title he still retains until a replacement is found. In that role, he established a dialogue with health professionals and the public about the health and societal implications of the HGP. He's given hundreds of talks to physicians, consumer groups, students and the lay public.

Dr. Guttmacher also has played a critical role in guiding the National Coalition for Health Professional Education in Genetics (NCHPEG). NHGRI partnered with the American Medical Association and the American Nurses Association to establish NCHPEG in 1996. The non-profit coalition promotes health-professional education and access to information about advances in human genetics. For its first three years, NCHPEG operated from within the genome institute. Dr. Guttmacher oversaw the maturation of NCHPEG into a freestanding entity with more than a hundred member organizations and its own executive director.

Dr. Guttmacher is also the acting director of the NHGRI Office of Policy, Planning and Communications.

Currently, Dr. Guttmacher is co-editing an upcoming series about the application of advances in genomics to medical care for The New England Journal of Medicine. He and Dr. Collins wrote the first and last articles in the series and are co-editing the rest. The series of twelve articles is expected to be published beginning in the fall of 2002.

Born in Baltimore, Maryland, Dr. Guttmacher received an A.B. degree in 1972 from Harvard College and his M.D. from Harvard Medical School in 1981. From 1982 to 1985, Dr. Guttmacher completed an internship and residency in pediatrics at Children's Hospital Boston. In 1985, he earned a two-year National Research Service Award from the U.S. Public Health Service as a fellow in medical genetics at Children's Hospital Boston and Harvard Medical School.

In 1987, Dr. Guttmacher became director of the Vermont Regional Genetics Center at the University of Vermont College of Medicine. While there, he launched a series of public health genetics programs.

In addition, he directed the Vermont Cancer Center's Familial Cancer Program, the Vermont Newborn Screening Program, Vermont's only pediatric intensive care unit, and an NIH-supported initiative that was the nation's first statewide effort to involve the general public in discussion of the Human Genome Project's ethical, legal and social implications. He also had a busy practice in clinical genetics, conducted research, and was a tenured associate professor of pediatrics and medicine at the University of Vermont College of Medicine. Dr. Guttmacher is a Fellow of the American Academy of Pediatrics and a Fellow of the American College of Medical Genetics.

Dr. Guttmacher is married to Brigid Guttmacher and lives in Washington, D.C.