NHGRI Names Senior Consultant to the Director on Health Disparities

NHGRI Names Senior Consultant to the Director on Health Disparities 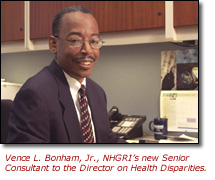 Currently on leave from his position as associate professor at Michigan State University, Mr. Bonham will provide guidance to NHGRI on issues related to the institute's role in reducing health disparities. He will also assist in the development of outreach strategies to ensure the inclusion of all populations in NHGRI's programs.

"Reaching out to diverse communities, so that we may all share the benefits of genomic research, is an important component of NHGRI's mission," said NHGRI Director Francis S. Collins, M.D., Ph.D. "I look forward to Mr. Bonham's assistance as we tackle the challenging issues related to reducing, and ultimately eliminating, health disparities."

A lawyer for twenty years, Mr. Bonham received his J.D. in 1982 from the Ohio State University College of Law, and his B.A. in 1978 from James Madison College at Michigan State University. His research in health policy has focused on the ethical, legal and social issues related to genetics and race, and especially on the ways that race and socio-economic status result in health disparities among different communities.

"There are important and challenging issues related to genetics and population groups that we must recognize," Mr. Bonham said. "I look forward to assisting NHGRI as it addresses these issues so that the research and the future of genomic medicine benefits the health of all."

Mr. Bonham was an investigator on the "Communities of Color and Genetics Policy Project," funded by the Ethical, Legal and Social Implications (ELSI) Program at NHGRI. The project engaged minority communities in conversations about genomic research and its resulting technology. The consultations helped develop recommendations for professional standards, laws, and institutional policies on the use and application of genomic research. In February 2002, members of the project, investigators and community participants briefed members of Congress and their staff, and members of the policy staff at the White House about the concerns and recommendations of the communities related to genetics policies.

In 2002, Mr. Bonham was appointed to the U.S. Department of Health and Human Services Secretary's Advisory Committee on Genetic Testing. He is a member of the national advisory committees of several groups that focus on genetic education and outreach, such as the March of Dimes Gene Project.

Mr. Bonham's primary appointment at Michigan State University is in the Department of Medicine, Health Services Research Division. He also holds appointments in the College of Osteopathic Medicine, the Center for Ethics and Humanities in the Life Sciences, and the Detroit College of Law at the university.