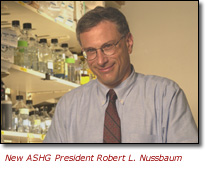 "It comes as no surprise to me that the members of ASHG have selected Dr. Nussbaum as their President-Elect," said NHGRI Director Francis S. Collins, M.D., Ph.D. "Bob is a prominent leader in the field of human genetics and has made considerable contributions to identifying the genetic abnormalities and destructive mechanisms involved in Parkinson's disease and Lowe's Syndrome. ASHG will surely benefit from his leadership."

ASHG was founded in 1948 as the primary professional membership organization for human geneticists in the Americas. The nearly 8,000 members include researchers, academicians, clinicians, laboratory practice professionals, genetic counselors, nurses and others involved in or with a special interest in human genetics.

"The last few decades have been extremely exciting times for human geneticists," said Dr. Nussbaum. "The ASHG and its members have been at the forefront of these efforts. It is a tremendous honor and privilege to have been asked to lead the ASHG."

Dr. Nussbaum said that he and ASHG 2003 President David Valle, M.D., of Johns Hopkins University School of Medicine's Institute of Genetic Medicine, plan to work closely together during the span of their tenures to strengthen ties with the genomic and gene therapy research communities.

As president-elect and president, Dr. Nussbaum also will provide leadership to ASHG and serve on its board of directors, which is responsible for managing the policies of the society. He also will serve on the ASHG's standing committees - such as the program committee, which plans the annual meeting.

ASHG holds an annual meeting, set this year in Baltimore, Oct. 15-19, and publishes the peer-reviewed American Journal of Human Genetics to facilitate the exchange of research findings among members. In addition, ASHG promotes genetics education among future genetics professionals and the public, and facilitates interactions between geneticists and other communities to inform and support responsible social and scientific policies.

"For my entire professional life," Dr. Nussbaum said, "the annual meeting has been a focal point for me where I can come together with other scientists and medical professionals interested in human genetics education and research to share ideas, research findings and policy initiatives."

Dr. Nussbaum earned his M.D. in 1975 from the Harvard University/Massachusetts Institute of Technology Joint Program in Health Sciences and Technology in Cambridge, Mass. From 1975 to 1978, he completed a residency in internal medicine at St. Louis' Washington University and at Barnes Hospital, also in St. Louis. He was a fellow in genetics at the Baylor College of Medicine in Houston from 1978 to 1981. From 1981 to 1984, he was an assistant professor of medicine at Baylor College of Medicine and an associate with the Howard Hughes Medical Institute (HHMI), Chevy Chase, Md.

From 1984 to 1993, Dr. Nussbaum was an associate investigator with HHMI in the Department of Genetics at the University of Pennsylvania in Philadelphia. During this period, he was also a physician in the Division of Human Genetics at Children's Hospital of Philadelphia.

Dr. Nussbaum came to NHGRI in 1993. In addition to his other roles at the institute, he is director of the Clinical Molecular Genetics Training Program, an executive faculty member of the Joint National Institutes of Health-Johns Hopkins University Genetic Counseling Training Program, and the project officer for the Center for Inherited Disease Research in Baltimore, a research center that analyzes common disorders caused by the actions of multiple genes and interactions with the environment.

NHGRI is one of the 27 institutes and centers at the National Institutes of Health, which is an agency of the Department of Health and Human Services (DHHS). The NHGRI Division of Intramural Research develops and implements technology to understand, diagnose and treat genomic and genetic diseases. Additional information about NHGRI can be found at its Web site, www.genome.gov.