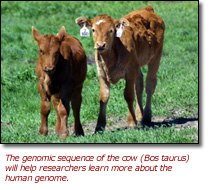 In a declaration of intent, the NHGRI and the state of Texas have indicated their plan to support the efforts of the Baylor College of Medicine and Texas A&M University to sequence the bovine genome. The entire project will cost $50 million. The genome institute will put up half the money if the remaining $25 million can be raised from other sources, said NHGRI Director Francis S. Collins, M.D., Ph.D. Sequencing would start in September 2003 if the additional funds can be raised.

To move funding for the research forward, Texas Gov. Rick Perry announced state support of up to $10 million over the next three years, starting in 2003, for the Cow Genome Project, saying that the project promises long-term benefits for human health and the biotechnology industry, as well as enormous gains for the beef and dairy industries. He has also offered to assist the project by helping to raise the additional $15 million needed to make the project a reality.

"We are thrilled that Gov. Perry and the state of Texas have stepped up to the plate and committed to providing crucial funds needed to get this important project rolling," said Dr. Collins, who is leader of the Human Genome Project. "We hope others in the public and private sectors will follow the lead of Texas and lend their support to this pioneering endeavor."

Richard Gibbs, Ph.D., director of Baylor College of Medicine's Human Genome Sequencing Center in Houston, said, "We are extremely excited by the level of enthusiasm for this project by the NHGRI and Governor Perry's commitment to make the Cow Genome Project a reality in Texas. This effort will have a great impact on health, agriculture and for building biotechnology in the state."

The bovine genome is similar in size to the genomes of humans and other mammals, with an estimated size of 3 billion base pairs. Besides its obvious potential for improving dairy and meat products and enhancing food safety, adding the genomic sequence of the cow (Bos taurus) to the growing list of sequenced animal genomes will help researchers learn more about the human genome.

"By comparing the human genome with the genomes of different organisms, we can better understand the structure and function of human genes and thereby develop new strategies in the battle against human disease," Dr. Collins explained. "The more genomes we have, the more powerful this tool becomes."

In April 2003, the Human Genome Project expects to announce the essential completion of the human genome sequence. In addition to decoding the genetic makeup of humans, researchers involved in that project have sequenced and analyzed the genomes of a number of model organisms, including baker's yeast, the roundworm and, most recently, in December 2002, the laboratory mouse. In addition, a Baylor College of Medicine team led by Dr. Gibbs completed a rough draft of the sequence of the rat genome in November 2002.

As the value of genome sequence is seen to be even greater than anticipated, NHGRI is making sequencing capacity at NHGRI-supported centers available for work on other organisms. In 2001, NHGRI created a priority-setting process to make decisions about the many requests being brought forward by various communities of scientists, each championing the animals used in their own research or industry. To nominate a particular organism, scientists must write a proposal, or "white paper," that justifies why substantial funds should be spent sequencing that animal's genome. These white papers are reviewed by the Genome Resources and Sequencing Priority Panel (GRASPP), a blue-ribbon group established by NHGRI that assigns each proposal a rating of high, moderate or low priority. GRASPP then forwards its recommendations to the National Advisory Council for Human Genome Research (NACHGR), a federally chartered committee that establishes NHGRI's program priorities and goals, for a final decision.

Dr. Collins emphasized that even a high-priority ranking does not represent a commitment from NHGRI to sequence an organism's genome; rather, the rankings simply indicate the medical and biological opportunities posed by various proposals.

At its most recent meeting held earlier this month, NACHGR recommended that the rhesus monkey be added to the high-priority list of model organisms to be considered for genome sequencing as capacity becomes available. Animals previously placed on the high-priority list include the cow, which was added in September 2002, along with the dog, the chimpanzee, the chicken, the honeybee, the sea urchin, several single-celled organisms and a collection of seven species of fungi. Sequencing is currently underway on the honeybee, the chimpanzee, the chicken, a type of fruit fly (Drosophila pseudoobscura) and the fungi collection.

The white paper for the cow sequencing effort.

A high-resolution photo of the calves pictured above is available for download.

NHGRI is one of the 27 institutes and centers at the National Institutes of Health, an agency of the Department of Health and Human Services (DHHS). The NHGRI Division of Extramural Research supports grants for research and for training and career development at sites nationwide. Additional information about NHGRI can be found at its Web site, www.genome.gov.

To view the PDF file on this page, you will need Adobe Acrobat Reader.