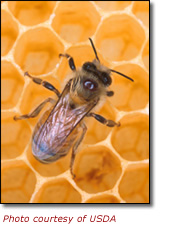 BETHESDA, Md., Wed., Jan. 7, 2004 - The National Human Genome Research Institute (NHGRI), one of the National Institutes of Health (NIH), today announced that the first draft version of the honey bee genome sequence has been deposited into free public databases.

The sequence of the honey bee, Apis mellifera, was assembled by a team led by Richard Gibbs, Ph.D., director of the Human Genome Sequencing Center at Baylor College of Medicine in Houston. The honey bee genome is about one-tenth the size of the human genome, containing about 300 million DNA base pairs.

Researchers have deposited the initial assembly, which is based on six-fold sequence coverage of the honey bee genome, into the NIH-run, public database, GenBank (www.ncbi.nih.gov/Genbank). In turn, Genbank will distribute the sequence data to the European Molecular Biology Laboratory's Nucleotide Sequence Database, EMBL-Bank (www.ebi.ac.uk/embl/index.html), and the DNA Data Bank of Japan, DDBJ (www.ddbj.nig.ac.jp).

Sequencing of the honey bee genome began in early 2003. NHGRI provided about $6.9 million in funding for the project and the U.S. Department of Agriculture contributed $750,000. 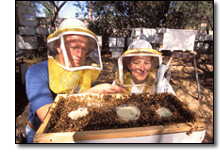 The honey bee is valued by farmers for its ability to produce honey and pollinate crops. Besides its importance in agriculture, the honey bee serves as a model organism for studying human health issues including immunity, allergic reaction, antibiotic resistance, development, mental health, longevity and diseases of the X chromosome. Biologists also are interested in the honey bee's social instincts and behavioral traits.

In addition, researchers want to compare the honey bee's genome with the genomes of other organisms to find genes and regulatory regions within DNA. Scientists are particularly interested in comparing the honey bee's genome with the previously sequenced insect genomes, such as the fruit fly and mosquito, as well as with DNA sequences from Africanized bee strains that have invaded many areas of the southern United States. For more on the rapidly growing field of comparative genomic analysis, go to: www.genome.gov/10005835/background-on-comparative-genomic-analysis/.

To read the white paper outlining the scientific strategy for sequencing the honey bee genome, go to:
www.genome.gov/sites/default/files/genome-old/pages/Research/Sequencing/SeqProposals/HoneyBee_Genome.pdf

A high-resolution photo of the honey bee is available at: http://www.genome.gov/dmd/img.cfm?node=Photos/Animals/Insects/Bee Apis mellifera&id=79117.

For additional information on the honey bee genome assembly, contact:

To view the PDF on this page, you will need Adobe Acrobat Reader.