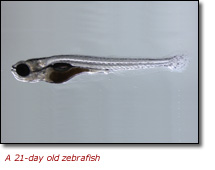 BETHESDA, Md., Mon., Jan. 26, 2004 - A Japanese-U.S. team today reported the successful creation of transgenic animals using sperm genetically modified and grown in a laboratory dish, an achievement with implications for a wide range of research from developmental biology to gene therapy.

In their study, to be published in the online edition of the Proceedings of the National Academy of Sciences during the week of Jan. 26-30, researchers from Fukui Prefectural University in Obama, Japan, and the National Human Genome Research Institute (NHGRI), which is part of the National Institutes of Health (NIH), describe the innovative techniques they used to produce genetically modified zebrafish using sperm cells grown under laboratory, or "in vitro," conditions.

"To our knowledge, this is the first time that sperm cells have been cultured entirely in vitro and used to produce a transgenic animal. It was a unique challenge that required creative solutions," said Shawn Burgess, Ph.D., an investigator in NHGRI's Genome Technology Branch and a co-author of the study.

Although further refinement and testing is needed, Dr. Burgess said the new techniques have the potential to speed the production of many different types of transgenic animal models that will shed new light on human development and disease. The sperm culturing system will allow researchers to further explore the basic biology of sperm production in vertebrates. The findings also may prove helpful to researchers exploring pre-fertilization strategies for human gene therapy, thus allowing preventive treatment for certain genetic disorders, Dr. Burgess said.

Eric D. Green, M.D., Ph.D., NHGRI's scientific director and director of the Division of Intramural Research, said, "This is an outstanding example of our efforts to build upon the foundation laid by the Human Genome Project. Development of such novel technologies and methods will be essential for translating our rapidly growing knowledge of the genetic basis of disease into better diagnostic approaches and therapeutic options."

Past efforts to genetically modify sperm cells in animals prior to fertilization have been stymied by the failure of these cells to mature under in vitro growth conditions. Drawing upon the cell culture expertise of Noriyoshi Sakai, Ph.D., and Kayoko Kurita, of Fukui Prefectural University, the Japanese-U.S. team developed a system that enables immature sperm cells, or spermatagonia, taken from male zebrafish to survive long enough in vitro that they can receive foreign genes inserted by a retrovirus. Those cells go on to develop into mature, functional sperm. The genetically modified, cultured sperm are then used to fertilize zebrafish eggs in a laboratory dish - a process known as in vitro fertilization - resulting in the production of transgenic embryos and, ultimately, transgenic zebrafish.

"The secret to our success was the idea of placing a layer of special 'feeder cells' under the spermatagonia in the laboratory dish. These feeder cells, derived from zebrafish testicular cancer cell lines, promote the growth of spermatagonia and stimulate them to mature into functional sperm," said Dr. Sakai, the study's senior author and a reproductive biologist.

One of the biggest advantages of the cultured sperm approach is that transgenic zebrafish created in this way carry the inserted, foreign gene in every cell of their bodies, including their germ cells. This means the fish will transmit the foreign gene along to their offspring in a pattern identical to their natural genes.

"Conventional techniques of producing transgenic animals, such as microinjection of genes into eggs and the retroviral transduction of genes into embryos, often produce many animals that are mosaic, which means they do not contain the foreign gene in all their cells. In the case of zebrafish, less than 20 percent of fish produced by injecting DNA into fertilized eggs will transmit the foreign gene to the next generation. So, we have to sort through hundreds of fish and breed them for two generations to produce a stable, transgenic line," said Dr. Burgess. "With the new approach, the transgenic fish are not mosaic, so screening for transgenics is reduced and an entire generation of breeding is skipped. That saves significant time and money."

The zebrafish, Danio rerio, is a small, transparent aquarium fish used as a model system for studying the biology of vertebrates. The fish, which share many of the same genes as humans, are ideal for genetic studies because of their rapid rate of reproduction and because their genes can be readily mutated. However, researchers have been frustrated by the lack of methods to target mutations to specific genes in the zebrafish.

In their current system, the researchers can grow zebrafish sperm cells in culture for about 12 days. According to Dr. Burgess, the team is now working to extend the period that sperm cells can be cultured, so there is more time to select cells that have the foreign gene inserted in specific areas of the genome in what is commonly called a "targeted gene knockout." Currently, such gene targeting is not possible in zebrafish or any vertebrate animal model system other than mice, for which such targeting involves the use of embryonic stem cells.

NHGRI is one of the 27 institutes and centers at NIH, an agency of the Department of Health and Human Services. The NHGRI Division of Intramural Research develops and implements technology to understand, diagnose and treat genomic and genetic diseases. Additional information about NHGRI can be found at its Web site, www.genome.gov.