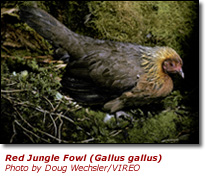 BETHESDA, Md., Mon., March 1, 2004 - The National Human Genome Research Institute (NHGRI), one of the National Institutes of Health (NIH), today announced that the first draft of the chicken genome sequence has been deposited into free public databases for use by biomedical and agricultural researchers around the globe.

A team led by Richard Wilson, Ph.D., from the Washington University School of Medicine in St. Louis successfully assembled the genome of the Red Jungle Fowl, Gallus gallus, which is the ancestor of domestic chickens. Comprised of about 1 billion DNA base pairs, the chicken genome is the first avian genome to be sequenced.

The Washington University researchers have deposited the initial assembly, which is based on seven-fold sequence coverage of the chicken genome, into the public database, GenBank (www.ncbi.nlm.nih.gov/Genbank). In turn, GenBank will distribute the sequence data to the European Molecular Biology Laboratory's Nucleotide Sequence Database, EMBL-Bank (www.ebi.ac.uk/embl/index.html), and the DNA Data Bank of Japan, DDBJ (www.ddbj.nig.ac.jp).

To facilitate comparative genomic analysis, the researchers also have aligned the draft version of the chicken sequence with the human sequence. Those alignments can be scanned using the University of California, Santa Cruz's Genome Browser, (http://genome.ucsc.edu/cgi-bin/hgGateway); the National Center for Biotechnology Information's Map Viewer, (www.ncbi.nlm.nih.gov/mapview); and the European Bioinformatics Institute's Ensembl system, (www.ensembl.org).

Sequencing of the chicken genome began in March 2003. NHGRI provided about $13 million in funding for the project. 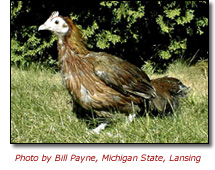 In addition, using the Gallus gallus genome sequence assembled by Washington University as a reference framework, an international team, led by the Beijing Genomics Institute in China and supported by the Wellcome Trust in Britain, has created a map of genetic variation for three different strains of domestic chickens. The strains were a broiler strain from the United Kingdom, a layer strain from Sweden and a Silkie strain from China. To make the map, researchers identified and analyzed about 2 million genetic variation sites, mostly single nucleotide polymorphisms (SNPs). The genetic variation data will soon be deposited into GenBank, from which the data will be freely accessible to researchers worldwide.

Recent outbreaks of avian flu have accelerated scientists' interest in learning more about the chicken genome and how genetic variation may play a role in the susceptibility of different strains to the disease. In addition to its tremendous economic value as a source of eggs and meat, the chicken is widely used in biomedical research. It serves as an important model for the study of embryology and development, as well as for research into the connection between viruses and some types of cancer.

The chicken also is well positioned from an evolutionary standpoint to provide an intermediate perspective between mammals, such as humans, and lower vertebrates, such as fish. By comparing the human genome sequence with those of other organisms, researchers can identify regions of similarity and difference. This information can help scientists better understand the structure and function of genes and thereby develop new strategies to combat human disease.

For more on the rapidly growing field of comparative genomic analysis, go to: www.genome.gov/10005835/background-on-comparative-genomic-analysis/. To read the white paper outlining the scientific rationale for sequencing the chicken genome, go to: www.genome.gov/sites/default/files/genome-old/pages/Research/Sequencing/SeqProposals/Chicken_Genome.pdf

Information on how to obtain a high-resolution photo of the Red Jungle Fowl is available at: www.genome.gov/dmd.

For more information on the chicken genome assembly, contact: