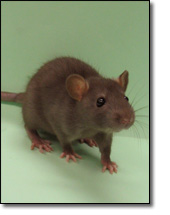 BETHESDA, Md., Wed., March 31, 2004 - An international research team, supported by the National Institutes of Health (NIH), today announced it has completed a high-quality, draft sequence of the genome of the laboratory rat, and has used that data to explore how the rat's genetic blueprint stacks up against those of mice and humans.

In a paper published in the April 1 issue of the journal Nature, the Rat Genome Sequencing Project Consortium describes its efforts to produce and analyze a draft sequence of the Brown Norway strain of the laboratory rat (Rattus norvegicus). The project, led by the Human Genome Sequencing Center at Baylor College of Medicine in Houston, was primarily funded by the National Heart, Lung and Blood Institute (NHLBI), $58.5 million, and the National Human Genome Research Institute (NHGRI), $60 million.

"This is an investment that is destined to yield major payoffs in the fight against human disease," said NIH Director Elias A. Zerhouni, M.D. "For nearly 200 years, the laboratory rat has played a valuable role in efforts to understand human biology and to develop new and better drugs. Now, armed with this sequencing data, a new generation of researchers will be able to greatly improve the utility of rat models and thereby improve human health."

Areas in which rat models have already helped to advance medical research include: cardiovascular diseases (hypertension); psychiatric disorders (studies of behavioral intervention and addiction); neural regeneration; diabetes; surgery; transplantation; autoimmune disorders (rheumatoid arthritis); cancer; wound and bone healing; and space motion sickness. In drug development, the rat is routinely employed to demonstrate therapeutic efficacy and assess toxicity of drug compounds prior to human clinical trials. The genome sequence will facilitate all of these studies, as well as help researchers better pinpoint the crucial areas of biological difference between rats and humans.

"This is an era of extraordinary biomedical opportunities in genomic research. As a result of this significant achievement, the rat model is poised to be at the forefront of discovery, providing insight into human health and new treatments for human diseases," said NHLBI Acting Director Barbara Alving, M.D.

"The sequencing of the rat genome constitutes another major milestone in our effort to expand our knowledge of the human genome," said NHGRI Director Francis S. Collins, M.D., Ph.D. "As we build upon the foundation laid by the Human Genome Project, it's become clear that comparing the human genome with those of other organisms is the most powerful tool available to understand the complex genomic components involved in human health and disease."

After the rat genome sequence was assembled at Baylor, an international team, comprised of more than 20 groups in six countries, conducted a three-way analysis comparing the rat sequence data with similar data from the mouse and the human. In addition to the paper in Nature, the team is publishing an additional 30 papers in the April issue of the journal Genome Research, which describe the analyses in greater detail.

"Future work aimed at identifying the genomic differences that contribute to the evolution of physical traits may benefit from analyses such as these, which will become more powerful as the repertoire of mammalian genome sequences expands," said Richard Gibbs, Ph.D., director of the Baylor College of Medicine's Genome Sequencing Center and principal investigator of the Rat Genome Sequencing Project.

Comparison of the rat genome to those of the human and mouse also opens a new and unique window into mammalian evolution. The rodent lineage, which gave rise to the rat and mouse, and the primate lineage, which gave rise to humans, diverged about 80 million years ago. Humans have 23 pairs of chromosomes, while rats have 21 and mice have 20. However, the new analysis found chromosomes from all three organisms to be related to each other by about 280 large regions of sequence similarity - called "syntenic blocks" - distributed in varying patterns across the organisms' chromosomes.

The sequence data also confirms that the rodent lineage split 12 to 24 million years ago into the separate lines that gave rise to the rat and to the mouse. Researchers estimate about 50 chromosomal rearrangements occurred in each of the rodent lines after divergence from their common ancestor. The number of chromosomal rearrangements, as well as other types of genome changes, was found to be much lower in the primate lineage, indicating that evolutionary change has occurred at a faster rate in rodents than in primates.

The new analysis also underscores the fact that while rats and mice look very similar to the human eye, there are significant genomic differences between the two types of rodents. For example, some aspects of genomic evolution in the rat appear to be accelerated when compared to the mouse. According to the new analysis, due to the unusually rapid expansion of selected gene families, rats possess some genes not found in the mouse, including genes involved in immunity, the production of pheromones (chemicals involved in sexual attraction), the breakdown of proteins and the detection and detoxification of chemicals.

To achieve its goal of producing a high-quality draft sequence, the Rat Genome Sequencing Project developed a new, "combined" approach that used both whole genome shotgun (WGS) and bacterial artificial chromosome (BAC) clone sequencing techniques. To merge these into the final draft sequence, the Baylor group developed the Atlas software package for genome assembly. The resulting genome sequence was contained in 291 large segments, with a typical length of 19 million bases. Moreover, the structure of the 3 percent of the genome that contains recent duplications - thought to be the regions in which many genes are "born" - was determined by the Atlas assembler. These statistics match or exceed other draft genome sequences. Overall, the combined approach takes advantage of strengths of both the WGS and BAC methods.

A high-resolution photo of the Brown Norway strain of the laboratory rat is available at: www.genome.gov/dmd.

NHGRI and NHLBI are two of the 27 institutes and centers at the NIH, which is an agency of the Department of Health and Human Services. For more on comparative genomic analysis, go to: www.genome.gov/10005835/background-on-comparative-genomic-analysis/.