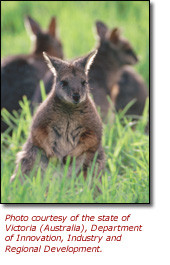 SAN FRANCISCO, Tues., June 8, 2004 - The National Human Genome Research Institute (NHGRI), part of the National Institutes of Health (NIH), today announced a partnership with the Melbourne-based Australian Genome Research Facility Ltd. (AGRF) to sequence the DNA of one of Australia's best-known animals: a member of the kangaroo family known as the tammar wallaby.

"This scientific collaboration between the United States and Australia represents another important step in our quest to gain a better understanding of the human genome," said NHGRI Director Francis S. Collins, M.D., Ph.D. "As we build on the success of the Human Genome Project, it has been increasingly clear that one of the best tools for identifying crucial elements in the human genome is to compare it with the genomes of a wide variety of other animals."

Comparing the human genome sequence with those of other organisms, such as the roundworm, mouse or kangaroo, enables scientists to identify regions of similarity and difference that can provide clues about the structure and function of genes vital to human health and development. The type of kangaroo chosen for sequencing is the tammar wallaby (Macropus eugenii), a relatively small member of the kangaroo family found on islands along Australia's southern and western coasts. Researchers are studying the tammar wallaby to gain insights applicable to human reproduction and development; evolution; anatomy and physiology of mammals; and disease susceptibility. The kangaroo will be the second marsupial to have its genome sequenced; several months ago, NHGRI approved plans to sequence a gray short-tailed, South American opossum (Monodelphis domestica).

"We expect the data generated by the kangaroo genome project will prove to be extremely valuable for medical research, as well as agricultural research, around the globe. In addition, the project is an exciting opportunity for Australian scientists to build relationships with the National Institutes of Health - one of the largest and most influential medical research agencies in the world," said John Brumby, who is treasurer of the Australian state of Victoria and part of the Victorian delegation to the BIO2004 conference in San Francisco.

AGRF expects to begin sequencing the kangaroo genome in 2004 and complete its part of the effort in approximately two years. The State Government of Victoria, Australia is providing up to $3.2 million (Australian $4.5 million) in support for the project to AGRF, which will sequence the approximately 3 billion DNA letters of the tammar wallaby's genome to one-fold sequence coverage. Once AGRF obtains one-fold coverage, NHGRI-supported researchers will sequence an equivalent number of base pairs to achieve the project's goal of two-fold sequence coverage. The exact cost of the entire project will not be known until the U.S. component begins in mid-2006 because sequencing costs are expected to continue to drop significantly with ongoing technological advances.

NHGRI has chosen the Baylor College of Medicine's Human Genome Sequencing Center in Houston, which is part of NHGRI's Large-Scale Sequencing Research Network, to carry out the U.S. component of the effort. The data will be deposited into free public databases that are easily accessible to researchers worldwide.

In addition to its scientific challenges, the kangaroo genome project holds a special personal appeal for Richard Gibbs, Ph.D., director of the Baylor sequencing center. Dr. Gibbs grew up in southern Australia, graduated from the University of Melbourne, and played with wallabies as a child. Consulting on the project will be Kerstin Linblad-Toh, Ph.D., of the Broad Institute of MIT and Harvard, which is also part of NHGRI's Large-Scale Sequencing Research Network. Dr. Lindblad-Toh's group was involved in sequencing and finishing the genome of the human, is currently working on finishing the mouse genome sequence and continues work on the genomes of several other organisms, including the dog and a group of fungi.

Marsupials are unique among mammals because their young are born at an extremely early stage of development and complete their development sheltered inside their mother's protective pouch. This makes the young readily available for early developmental research. Marsupials, which last shared a common ancestor with humans about 130 million years ago, also provide a unique midpoint on the evolutionary timeline for comparative studies involving other mammals. In addition to sequencing species that are far apart on the evolutionary tree, it is important to sequence sets of species that are closely related. Having two marsupial genomes, separated by 70-80 million years of evolution, will provide scientists with data sets that should allow them to make more precise alignments with the human genome sequence.

To read a white paper describing the scientific rationale for sequencing the tammar wallaby, go to: www.genome.gov/sites/default/files/genome-old/pages/Research/Sequencing/SeqProposals/WallabySEQ.pdf

. It is estimated that 1 million of the animals currently live on Kangaroo Island, Australia's third largest island. Tammar wallabies breed once a year, delivering their young on or about the same day each year and then mate again within an hour of delivery, accounting for their population explosion. A high-resolution photo of the tammar wallaby is available at: www.genome.gov/dmd.

To learn more about the rapidly growing field of comparative genomic analysis, go to: www.genome.gov/10005835/background-on-comparative-genomic-analysis/.

For the white papers on other organisms currently in NHGRI's sequencing pipeline, go to: Approved Sequencing Targets.

For more on NHGRI's selection process for large-scale sequencing projects, go to: www.genome.gov/Sequencing/OrganismSelection.