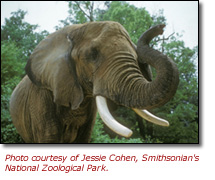 BETHESDA, Md., Wed., Aug. 4, 2004 - As part of its ongoing effort to enhance understanding of the human genome, the National Human Genome Research Institute (NHGRI), one of the National Institutes of Health, announced today that the Large-Scale Sequencing Research Network has received the green light to begin sequencing 18 strategically selected organisms, including the orangutan, African savannah elephant and domestic cat.

In a shift from NHGRI's previous procedure of choosing sequencing targets one at a time on the basis of proposals from individuals or groups of scientists, the National Advisory Council for Human Genome Research (NACHGR), a federally chartered committee that advises NHGRI on program priorities and goals, recently approved a comprehensive plan that identified two groups of organisms on the basis of their collective scientific merits.

"Science tells us that the most effective approach we currently have to identify the essential functional and structural components of our own genome is to compare it with the genomes of other organisms. With each new genome that we sequence, we move closer to the goal of finding all of the crucial elements of the human genome involved in development, health and disease," said Mark S. Guyer, Ph.D., director of NHGRI's Division of Extramural Research. "We hope to accelerate that process with our new sequencing strategy that identifies the organisms, or sets of organisms, with the greatest potential to fill gaps in our knowledge."

The first group announced today consists of nine mammals. They were selected because each organism represents an important position on the evolutionary tree and therefore will contribute a sequence that will be particularly important in helping to interpret the human genome.

The data from seven of these mammalian genomes will be used primarily in the identification of features that are similar, or conserved, among the genomes of humans and other mammalian species. If a DNA sequence has been conserved throughout the evolution of most or all of these species, there is a strong likelihood that the sequence constitutes a functionally important region of the genome.

The seven mammals in this subset are the African savannah elephant (Loxodonta africana), the European common shrew (Sorex araneus), the European hedgehog (Erinaceus europeaus), the guinea pig (Cavia porcellus), the lesser hedgehog tenrec (Echinops telfairi), the nine-banded armadillo (Dasypus novemcinctus) and the rabbit (Oryctolagus cuniculus). An eighth mammal, the domestic cat (Felis catus) will add valuable data to the subset, but was selected primarily because of its importance as a medical model for studying disease.

The ninth mammal, the orangutan (Pongo pygmaeus), is a primate, the animals that are most closely related to humans. NHGRI-supported researchers have already sequenced the genome of the chimpanzee (Pan troglodytes) and are sequencing the genome of the rhesus macaque (Macaca mulatta). The orangutan genome will be used in conjunction with these other primates to identify those features in the human genome that differ among primates. The ultimate goal is to better define and understand the unique DNA sequences that set primates apart from other mammals and humans apart from other primates.

It is well known that most sequences of the human genome originated long before humans themselves. Consequently, scientists will use the genome sequences of the nine non-mammalian animals to learn more about how, when and why the human genome came to be composed of certain DNA sequences, as well as to gain new insights into organization of genomes. In addition, two of the organisms are also of direct interest to researchers investigating human disease. Trichinella is a parasitic roundworm that is transmitted by eating raw or undercooked pork, and Biomphalaria is a tropical freshwater snail that serves as an intermediate host for the parasitic fluke that causes schistosomiasis, a debilitating disease prevalent in many areas of the Middle East, Africa, Asia and Brazil.

In addition to sequencing this variety of non-human organisms, the NHGRI's sequencing program also plans to advance continuing efforts to catalogue the variations found among genomes of different people. Details of that component of the plan, which is aimed at understanding the role that natural genomic variants play in causing diseases, will be developed at a workshop that NHGRI plans to hold later this summer.

Sequencing efforts will be carried out by the five centers in the NHGRI-supported Large-Scale Sequencing Research Network: Agencourt Bioscience Corp., Beverly, Mass.; Baylor College of Medicine, Houston; the Broad Institute of MIT and Harvard, Cambridge, Mass.; The Institute for Genomic Research, J. Craig Venter Science Foundation Joint Technology Center, Rockville, Md.; and Washington University School of Medicine, St. Louis. Assignment of each organism to a specific center or centers will be determined at a later date.

NHGRI's new selection process began with the formation of two working groups comprised of experts from across the research community. Each of the working groups was responsible for developing a proposal for a set of genomes to sequence that would advance knowledge in one of two important scientific areas: understanding the human genome and understanding the evolutionary biology of genomes. A coordinating committee then reviewed the working groups' proposals, helping to fine-tune the suggestions and integrate them into an overarching set of scientific priorities. The recommendations of the coordinating committee were then reviewed and approved by NACHGR, which in turn forwarded its recommendations regarding sequencing strategy to NHGRI leadership.

During the working groups' deliberations, NHGRI also established an analysis group to help determine the optimal number of species and/or depth of sequence coverage for identifying conserved genome sequences. The analysis group's work will be ongoing, and the participants will continue to evaluate the new sequence data as they are generated to assess how NHGRI's strategy is working and to make any necessary adjustments to the scientific plan.

"Over the past few years, comparative analysis has emerged as an extremely powerful tool for deciphering the human genome sequence. Now, with the data generated by our more systematic approach to selecting sequencing targets, researchers can look forward to using that tool with greater precision and efficiency," said Jane Peterson, Ph.D., associate director of NHGRI's Division of Extramural Research.

In addition to the human and chimpanzee, the genomes of a number of organisms have been or are being sequenced by the large-scale sequencing capacity developed by the Human Genome Project. These include the dog, the mouse, the rat, the chicken, the honey bee, two fruit flies, the sea urchin, two puffer fish, two sea squirts, two roundworms, several fungi, baker's yeast and many prokaryotes (bacteria and archaea) including Escherichia coli. Additional organisms already in the NHGRI sequencing pipeline are: the macaque, the kangaroo, the cow, the gray short-tailed opossum, the red flour beetle, the flatworm Schimdtea mediterranea, more species of fruit fly and more species of fungi.

To learn more about the rapidly growing field of comparative genomic analysis, go to: www.genome.gov/10005835/background-on-comparative-genomic-analysis/. For the white papers on other organisms currently in NHGRI's sequencing pipeline, go to: Approved Sequencing Targets.