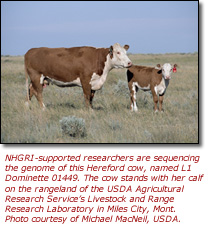 BETHESDA, Md., Wed., Oct. 6, 2004 - The first draft of the bovine genome sequence has been deposited into free public databases for use by biomedical and agricultural researchers around the globe, leaders of the Bovine Genome Sequencing Project announced today.

Contributors to the $53 million international effort to sequence the genome of the cow (Bos taurus) include: the National Human Genome Research Institute (NHGRI), which is part of the National Institutes of Health (NIH); the U.S. Department of Agriculture's Agricultural Research Service and Cooperative State Research, Education, and Extension Service; the state of Texas; Genome Canada through Genome British Columbia, The Commonwealth Scientific and Industrial Research Organization of Australia; Agritech Investments Ltd., Dairy Insight, Inc. and AgResearch Ltd., all of New Zealand; the Kleberg Foundation; and the National, Texas and South Dakota Beef Check-off Funds.

A team led by Richard Gibbs, Ph.D., at Baylor College of Medicine's Human Genome Sequencing Center in Houston carried out the sequencing and assembly of the genome. Additional work aimed at uncovering more detailed information about individual bovine genes - a process referred to as full-length cDNA sequencing - is being conducted by a team led by Marco Marra, Ph.D., at the British Columbia Cancer Agency in Vancouver.

The initial assembly is based on 3.3-fold coverage of the bovine genome. Researchers can access the sequence data through the following public databases: GenBank (www.ncbi.nlm.nih.gov/Genbank) at NIH's National Center for Biotechnology Information (NCBI), EMBL Bank (www.ebi.ac.uk/embl/index.html) at the European Molecular Biology Laboratory's Nucleotide Sequence Database and the DNA Data Bank of Japan (www.ddbj.nig.ac.jp). The data will also be viewable through NCBI's Map Viewer (www.ncbi.nlm.nih.gov), UCSC Genome Browser (www.genome.gucsc.edu) at the University of California at Santa Cruz and the Ensembl Genome Browser (www.ensembl.org) at the Wellcome Trust Sanger Institute in Cambridge, England.

Researchers are continuing sequencing and plan to have a 6-fold draft of the bovine genome completed sometime in the first half of 2005. They are also comparing the bovine genome sequence with those of the human and other organisms that have already been sequenced. Results of these analyses will begin to be published in the public databases in the next several months.

The bovine genome is similar in size to the genomes of humans and other mammals, containing approximately 3 billion DNA base pairs. In addition to helping medical researchers learn more about the human genome and thereby develop better ways of treating and preventing disease, the bovine genome sequence will serve as a tool for agricultural researchers striving to improve health and disease management of cattle and enhance the nutritional value of beef and dairy products.

Sequencing of the bovine genome began in December 2003. The breed of cattle selected for the bulk of the sequencing project was Hereford, which is used in beef production. A high-resolution photo of the Hereford cow, named L1 Dominette 01449, whose DNA was sequenced is available at: www.genome.gov/12512900.

Sequencing at lighter coverage will be carried out in additional cattle breeds, including the Holstein, Angus, Jersey, Limousin, Norwegian Red and Brahman. The competed Bovine Genome Sequencing Project will allow detailed tracking of the DNA differences between these breeds to assist discovery of traits for better meat and milk production and to model human disease.

To learn more about the rapidly expanding field of comparative genomic analysis, go to: www.genome.gov/10005835/background-on-comparative-genomic-analysis/. To read the white paper that outlines the scientific rational and strategy for sequencing the bovine genome, go to: www.genome.gov/sites/default/files/genome-old/pages/Research/Sequencing/SeqProposals/BovineSEQ.pdf.

NHGRI is one of 27 institutes and centers at NIH, an agency of the Department of Health and Human Services. The NHGRI Division of Extramural Research supports grants for research and for training and career development at sites nationwide. Information about NHGRI can be found at: www.genome.gov