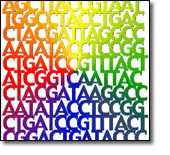 BETHESDA, Md., Thurs., Oct. 14, 2004 - The National Human Genome Research Institute (NHGRI), part of the National Institutes of Health (NIH), today announced it has awarded more than $38 million in grants to spur the development of innovative technologies designed to dramatically reduce the cost of DNA sequencing, a move aimed at broadening the applications of genomic information in medical research and health care.

NHGRI's near-term goal is to lower the cost of sequencing a mammalian-sized genome to $100,000, which would enable researchers to sequence the genomes of hundreds or even thousands of people as part of studies to identify genes that contribute to cancer, diabetes and other common diseases. Ultimately, NHGRI's vision is to cut the cost of whole-genome sequencing to $1,000 or less, which would enable the sequencing of individual genomes as part of medical care. The ability to sequence each person's genome cost-effectively could give rise to more individualized strategies for diagnosing, treating and preventing disease. Such information could enable doctors to tailor therapies to each person's unique genetic profile.

DNA sequencing costs have fallen more than 100-fold over the past decade, fueled in large part by tools, technologies and process improvements developed as part of the successful effort to sequence the human genome. However, it still costs at least $10 million to sequence 3 billion base pairs - the amount of DNA found in the genomes of humans and other mammals.

"These grants will open the door to the next generation of sequencing technologies. There are still many opportunities to reduce the cost and increase the throughput of DNA sequencing, as well as to develop smaller, faster sequencing technologies that meet a wider range of needs," said NHGRI Director Francis S. Collins, M.D., Ph.D. "Dramatic reductions in sequencing costs will lead to very different approaches to biomedical research and, eventually, will revolutionize the practice of medicine."

In the first set of grants, 11 teams will work to develop "near term" technologies that, within five years, are expected to provide the power to sequence a mammalian-sized genome for about $100,000. In the second set, seven groups will take on the longer-term challenge of developing revolutionary technologies to realize the vision of sequencing a human genome for $1,000 or less. The approaches pursued by both sets of grants have many complementary elements that integrate biochemistry, chemistry and physics with engineering to enhance the whole effort to develop the next generation of DNA sequencing and analysis technologies.

"These projects span an impressive spectrum of novel technologies - from sequencing by synthesis to nanopore technology. Many of these new approaches have shown significant promise, yet far more exploration and development are needed if these sequencing technologies are to be useful to the average researcher or physician," said Jeffery Schloss, Ph.D., NHGRI's program director for technology development. "We look forward to seeing which of these technologies fulfill their promise and achieve the quantum leaps that are needed to take DNA sequencing to the next level."

NHGRI's "Near-Term Development for Genome Sequencing" grants will support research aimed at sequencing a human-sized genome at 100 times lower cost than is possible today. There is strong potential that, five years from now, some of these technologies will be at or near commercial availability. Grant recipients and their approximate total funding are:

Gina L. Costa, Ph.D., Agencourt Bioscience Corp., Beverly, Mass.
$5.4 million (3 years)
"Bead-based Polony Sequencing"
This group will work to further develop polymerase colony (polony) sequencing technologies. This is a highly parallel sequencing approach that involves synthesizing short regions of identical DNA fragments on magnetic beads, packing millions of them into a chamber and then extending each of those molecules while detecting the addition of fluorescently labeled DNA building blocks or nucleotides.

Kenton Lohman, Ph.D., 454 Life Sciences Corp., Branford, Conn.
$2 million (2 years)
"Massively Parallel High Throughput, Low Cost Sequencing"
and
Marcel Margulies, Ph.D., 454 Life Sciences Corp., Branford, Conn.
$5 million (3 years)
"454 Life Sciences Massively Parallel System DNA Sequencing"
Expanding the capabilities of its sequencing-by-synthesis technology, this group will scale up the system to increase throughput, cut costs and provide the power to sequence genomes of organisms for which no framework of genomic data exists. In order to reduce labor and costs, this method emphasizes the miniaturization of each step, from sample preparation to DNA sequencing. The platform enables one person to fragment, amplify, sequence and assemble an entire genome, regardless of the genome's size.

Mostafa Ronaghi, Ph.D., Stanford Genome Technology Center, Palo Alto, Calif.
$1.8 million (3 years)
"Pyrosequencing Array for DNA Sequencing"
The principal investigator of this team is an inventor of pyrosequencing, which uses unmodified nucleotides and polymerases to synthesize DNA and a firefly enzyme to generate a chemiluminescent signal. The group of researchers will work on further developing a highly integrated and parallel format with improved equipment for detection of the chemiluminescent signals resulting in a portable and inexpensive device for low-cost genome sequencing.

Jingyue Ju, Ph.D., Columbia University, New York
$1.8 million (3 years)
"An Integrated System for DNA Sequencing by Synthesis"
One focus of this team's research is novel chemistry that allows a fluorescent molecule attached to a nucleotide to be detected and then removed with a flash of light after its addition to a growing DNA molecule. The researchers will also develop a unique way to attach many thousands of DNA molecules site specifically to a surface to produce a high-throughput device for DNA sequencing by synthesis.

Steven A. Benner, Ph.D., University of Florida, Gainesville
$800,000 (3 years)
"Polymerases for Sequencing by Synthesis"
This group's goal is to engineer a DNA polymerase, which is the enzyme used in cells and in laboratory experiments to synthesize new DNA molecules, that will have optimal characteristics for sequencing by synthesis with chemically-altered nucleotides.

Amit Meller, Ph.D., Rowland Institute at Harvard, Harvard University, Cambridge, Mass.
$600,000 (2 years)
"Ultra-fast Nanopore Readout Platform for Designed DNA's"
A nanometer is one-billionth of a meter, much too small to be seen with a conventional lab microscope. Most groups developing nanopores (holes about 2 nm in diameter) as DNA sequence transducers propose to detect an electrical, or ionic, signal from individual DNA molecules. This group will pursue a novel approach in which a nanopore is used to simultaneously detect electrical and fluorescent signals from many nanopores at one time.

NHGRI's "Revolutionary Genome Sequencing Technologies" grants have as their goal the development of breakthrough technologies that will enable a human-sized genome to be sequenced for $1,000 or less. Grant recipients and their approximate total funding are:

J. Michael Ramsey, Ph.D., University of North Carolina, Chapel Hill
$2 million (2 years)
Nanotechnology for the Structural Interrogation of DNA
This group will explore combinations of fabrication technologies to build devices for analysis of single DNA molecules, and use various measurement techniques to extract information from those devices. Experiment is woven together with simulation and modeling to understand the basic physics of molecule-device interaction at this size scale and its implications for device design.

James Weifu Lee, Ph.D., Oak Ridge National Laboratory, Oak Ridge, Tenn.
Two grants: $700,000 (3 years); $750,000 (3 years)
"Computational Research & Development for Rapid Sequencing Nanotechnology" "Experimental Research & Development for Rapid Sequencing Nanotechnology"
This group will develop computational modeling to guide the fabrication of a novel nanotechnology sequencing device, as well as design electronic control and detection experiments. Using this information, the group will build a device in which stretched DNA molecules would be made to pass between sharp electrodes spaced 2 to 5 nanometers apart. It will then test the device to see if it is possible to distinguish between the four types of nucleotides based on differences in a phenomenon called electron tunneling.

Scott D. Collins, Ph.D., University of Maine, Orono
$850,000 (2 years)
"High-speed Nanopore Gene Sequencing"
Skilled in silicon fabrication methods, this group will try to fabricate a nanopore with tiny electrodes and built-in circuits that will be used in experiments that attempt to measure differences in the electron tunneling of individual nucleotides in DNA molecules. Such devices could lay the groundwork for high-speed approaches to sequencing single DNA molecules.

Steven A. Benner, Ph.D., University of Florida, Gainesville
$800,000 (3 years)
"DNA Sequencing Using Nanopores"
This group will produce conical nanopores in a synthetic membrane, coat the pores with gold, modify the pores to control DNA transport and then introduce chemically modified DNA. The goal will be to detect different signals from each of the four types of nucleotides as DNA passes through the pores.

Andre Marziali, Ph.D., University of British Columbia, Vancouver
$650,000 (3 years)
"Nanopores for Trans-Membrane Bio-Molecule Detection"
This group will contribute to understanding how single biological molecules interact with pores inserted into membranes, and how useful information can be derived from those interactions. This study attempts to extend the use of nanopore sensors into living cells.

Stuart Lindsay, Ph.D., Arizona State University, Tempe, Ariz.
$550,000 (3 years)
"Molecular Reading Head for Single-Molecule DNA Sequencing"
Building on the concept of threading DNA through a molecular pore, this group is developing a system in which a chemical ring, acting as a reading head, is used to measure differences in friction as DNA passes through the ring. Theory and experiment are used to understand the observations.

"Each of these projects brings a unique combination of approach and expertise to solving difficult scientific and engineering problems. Collectively, this balanced grant portfolio should galvanize the sequencing technology research community and accelerate the substantial leaps forward needed to achieve substantial reduction in DNA sequencing costs," said Mark S. Guyer, Ph.D., director of NHGRI's Division of Extramural Research, which supports grants for research and for training and career development at sites nationwide.

For more details about the NHGRI sequencing technology development grants, go to: www.genome.gov/12513162/advanced-sequencing-technology-awards-2004/. NHGRI is one of 27 institutes and centers at NIH, an agency of the Department of Health and Human Services. Information about NHGRI can be found at: www.genome.gov.