BETHESDA, Md., Mon., Oct. 18, 2004 - Two medical geneticists from the National Human Genome Research Institute (NHGRI), part of the National Institutes of Health (NIH), have been elected to the Institute of Medicine (IOM) of the National Academies, one of the highest honors in the fields of medicine and health, it was announced today.

NHGRI Deputy Director Alan E. Guttmacher, M.D., and Robert L. Nussbaum, M.D., chief of the Genetic Disease Research Branch and acting chief of the Inherited Disease Research Branch in NHGRI's Division of Intramural Research, are among the 65 new members of IOM, which is a national resource for independently informed analysis and recommendations on issues related to human health. With their election, members make a commitment to devote a significant amount of time as volunteers for IOM committees, which conduct a broad range of studies on health policy issues.

"We are thrilled that the Institute of Medicine has recognized Drs. Guttmacher and Nussbaum for their outstanding professional achievements and commitment to service. Along with many others at NHGRI, these two physicians have been at the forefront of efforts to translate the findings of the Human Genome Project into new strategies for improving human health. The IOM surely will benefit from their membership," said NHGRI Director Francis S. Collins, M.D., Ph.D., who himself was elected to the IOM in 1991. 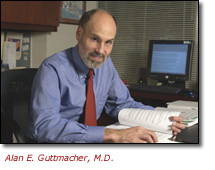 As deputy director of NHGRI, Dr. Guttmacher guides strategic planning for the institute and plays a lead role in integrating genomics into medical practice. In addition, as director of NHGRI's Office of Policy, Communications and Education, Dr. Guttmacher oversees the institute's health affairs, public policy, communications, community outreach and public education functions. His other activities at NHGRI have included co-editing a series of articles on genomic medicine for The New England Journal of Medicine, and co-founding a group called Genetic Resources on the Web, which works with organizations sponsoring genetics-related Web sites to ensure they contain high-quality information.

Prior to joining NHGRI in 1999, Dr. Guttmacher directed the Vermont Regional Genetics Center at the University of Vermont in Burlington, where he launched a series of public health genetics programs. He also had a busy practice in clinical genetics, conducted research and was a tenured associate professor of pediatrics and medicine at the University of Vermont College of Medicine.

Dr. Guttmacher received an A.B. degree from Harvard College in Cambridge, Mass. in 1972 and his M.D. from Harvard Medical School in 1981. From 1982 to 1985, he completed an internship and residency in pediatrics at Children's Hospital Boston and from 1985 to 1987 was a fellow in medical genetics at Children's Hospital Boston and Harvard Medical School. Dr. Guttmacher is a Fellow of the American Academy of Pediatrics and a Fellow of the American College of Medical Genetics. 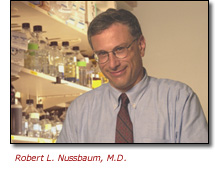 Dr. Nussbaum, who is currently the president of the American Society of Human Genetics, came to NHGRI in 1993. His research has made significant contributions to identifying the genetic abnormalities and disease mechanisms in Lowe Syndrome and Parkinson disease. In addition to his branch chief roles at NHGRI, Dr. Nussbaum is an executive faculty member of the Joint NIH-Johns Hopkins University Genetic Counseling Training Program. He also administers the Center for Inherited Disease Research, a high-throughput genotyping facility funded by a consortium of 12 NIH institutes that supports genetic research worldwide.

Dr. Nussbaum received an A.B. degree from Harvard College in 1971 and earned his M.D. in 1975 from the Harvard University/Massachusetts Institute of Technology Joint Program in Health Sciences and Technology. He completed a residency in internal medicine at St. Louis' Washington University and at Barnes Hospital, also in St. Louis, from 1975 to 1978, and was a fellow in genetics at Baylor College of Medicine in Houston from 1978 to 1981.

From 1981 to 1984, Dr. Nussbaum served as an assistant professor of medicine at Baylor College of Medicine. From 1984 to 1993, he was an associate investigator of the Howard Hughes Medical Institute, Chevy Chase, Md., and was based in the Department of Genetics at the University of Pennsylvania in Philadelphia.

A high-resolution photo of Dr. Guttmacher is available at: www.genome.gov/dmd/img.cfm?node=Photos/People/Guttmacher_Alan&id=79261.

NHGRI is one of 27 institutes and centers at NIH, an agency of the Department of Health and Human Services. The NHGRI Division of Intramural Research develops and implements technology to understand, diagnose and treat genomic and genetic diseases. Additional information about NHGRI can be found at: www.genome.gov.