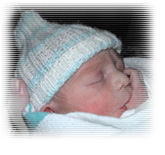 BETHESDA, Md., Tues., Feb. 22, 2005 - Researchers at the National Human Genome Research Institute (NHGRI), part of the National Institutes of Health (NIH), have developed a new laboratory method that rapidly identifies babies born with inherited forms of severe immune deficiency. The new genetic test, which still must be validated before widespread use, could someday be added to the panel of tests that already screen newborns for a variety of disorders.

The test identifies babies born with Severe Combined Immunodeficiency, or SCID, an illness in which the infant fails to develop a normal immune system. SCID babies can be infected by a wide range of viruses, bacteria and fungi that are normally controlled by a healthy baby's immune system. If undetected and untreated, SCID typically leads to death before the baby's first birthday.

Developed in the NHGRI Division of Intramural Research (DIR), the new test can use the same dried blood samples already collected from newborns and would provide the first accurate, high-throughput screen for immune deficiencies. Prior efforts to identify this disorder by counting white blood cells in newborns proved unreliable and expensive.

"This new laboratory technique is an excellent example of how increasingly sophisticated genetic tools can be applied to important public health problems," said NHGRI Scientific Director Eric D. Green, M.D., Ph.D. "Here we have a chance to catch an illness early when treatment is most effective. This new approach provides a rapid, accurate indication of a possible immune problem immediately after birth while the infant is protected by the mother's antibodies still circulating in the baby's blood."

If SCID is diagnosed in time, there are effective treatments. One form of the disease can be treated with an injectable medication. All forms of the disorder can be cured through the transplantation of bone marrow if a matching donor can be identified. And finally, SCID may be treated through human gene therapy in which a normal copy of the defective gene may be inserted into the patient's own blood-forming cells. The first gene therapy experiments in history were carried out at NIH in 1990 in two young Ohio girls with SCID. The patients are alive, continue to do well and are involved in ongoing research at NHGRI.

The sooner a child is diagnosed, the sooner treatment can begin and the more likely it is to be effective.

"Too many babies are diagnosed too late," said Jennifer M. Puck, M.D., chief of NHGRI's Genetics and Molecular Biology Branch. "And some babies develop fatal infections before their condition is recognized. Recent research shows that bone marrow transplants in the first three months of life work better than transplants at a later age. So it is critical to identify affected children immediately after birth. Since the babies lack overt clinical symptoms for some time, a molecular test is a good approach."

The newly developed screening tool exploits a detailed understanding of the maturation of T cells, one of the essential types of white blood cells that make up the immune system. Without a sufficient number of normal T cells, the immune system doesn't work, just as when the AIDS virus wipes out the same population of immune cells. During normal development, an individual T cell rearranges the gene that produces a so-called antigen receptor on the surface of the cell. The antigen receptor allows the T cell to identify an infectious agent and launch a defensive attack to kill the invader.

While rearranging the receptor gene, the maturing T cell produces a bit of leftover genetic material that forms a ring structure within the cell. Using a quantitative laboratory technique that measures the number of these rings within a blood sample, Dr. Puck's group was able to differentiate normal infants from those with SCID. In dried blood samples from healthy babies, the team was able to detect an average of 1,000 of these genetic rings; children with SCID had 30 or fewer. "That's a big difference," she said.

The development of the new test is described in the February issue of The Journal of Allergy and Clinical Immunology. Although the availability of the test raises the question of whether states should begin using it on all newborns, Dr. Puck concluded that the new test is not quite ready for widespread use. It must first be validated.

"Our false positive rate was about 1.5 percent, which is too high to be practical for screening," Dr. Puck said. A baby with a positive test would need to be evaluated to see if he or she was actually sick; a false positive rate of 1.5 percent would mean three out of every 200 newborns would need further testing. "That would be a lot of babies going back to the doctor and a lot of worried parents. We are now working on ways to decrease the number of false positives."

To validate the test, Dr. Puck's group is collaborating with the newborn screening laboratory of the Maryland Department of Health and Mental Hygiene in Baltimore. The Maryland state lab is supplying some 5,000 blood samples already collected on newborns for the NHGRI lab to test. Although these samples are likely to be normal, they will be used to refine the laboratory procedures and establish quality control. Once the high-throughput screening approach has been validated with this large set of existing samples from Maryland, the NHGRI lab plans to begin prospectively testing newborns from the state. Other state testing laboratories also have expressed interest in participating in the prospective studies.

Although considered a rare disease, SCID is best known to the public from media accounts - and a made-for-TV movie starring John Travolta - about David, the Bubble Boy, a Texas boy who spent his entire life in a germ-free environment, ultimately dying after a failed bone marrow transplant in early adolescence. No one knows exactly how many babies are born with SCID. Current estimates suggest that 1 in every 50,000 to 100,000 births may be affected, indicating SCID may be about as common as some of the inherited illnesses for which states currently screen all newborns. Experts suspect that many children with SCID die from infections before being diagnosed, so the true incidence of the disease may be even higher. Newborn screening may reveal the true incidence.

Because the new test is still experimental, it is not available to the general public and the cost has yet to be determined.

NHGRI is one of the 27 institutes and centers at the National Institutes of Health, which is an agency of the Department of Health and Human Services. The NHGRI Division of Intramural Research develops and implements technology to understand, diagnose and treat genomic and genetic diseases. Additional information about NHGRI can be found at www.genome.gov.