Recognizing their outstanding contributions to excellence in biomedical research, the Association of American Physicians (AAP) recently named two researchers from the National Human Genome Research Institute (NHGRI) to the organization's distinguished membership. Paul Meltzer, M.D., Ph.D, and Pu Paul Liu, M.D., Ph.D., of the NHGRI Division of Intramural Research (DIR) received the honor April 17, 2005 at the joint meeting of the AAP and the American Society for Clinical Investigation in Chicago. 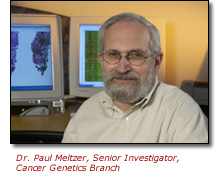 Dr. Meltzer, a senior investigator in DIR's Cancer Genetics Branch, analyzes the patterns of gene expression, gene amplification, and chromosomal abnormalities involved in the development of cancer, or oncogenesis. He has been an innovator in the development and application of microarray technology for significantly improving the classification of cancer, increasing understanding of oncogenic mechanisms, and identifying novel therapeutic targets. His current research projects center on the identification and physical mapping of amplified DNA in human cancers, including childhood cancers, breast cancer and skin cancer. 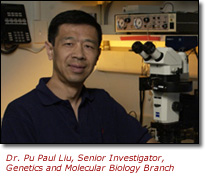 Dr. Liu, a senior investigator in DIR's Genetics and Molecular Biology Branch, studies how genetic changes in white blood cells, or leukocytes, lead to the development of leukemia. His laboratory has shown that acute myeloid leukemia is caused by an inversion of chromosome 16 that brings parts of two genes together to form a harmful new "fusion" gene, called GBFB-MYH11. He uses animal models, including mouse and zebrafish, to study the function of the normal GBFB gene and other genes essential to leukocyte development.

Founded in 1885, AAP is a nonprofit, professional organization dedicated to "the advancement of scientific and practical medicine." The group is widely regarded as a repository of leading medical minds and an influential forum to generate and disseminate biomedical knowledge. Over the years, AAP's membership has included Nobel laureates and members of the National Academy of Sciences and the Institute of Medicine. AAP annually elects 55 new members who have demonstrated excellence in achieving the organization's goals.