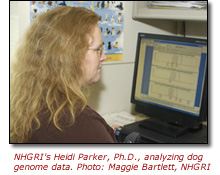 BETHESDA, Md., Thurs., July 21, 2005 - An international team that includes researchers from the National Human Genome Research Institute (NHGRI), part of the National Institutes of Health (NIH), has discovered that mammalian chromosomes have evolved by breaking at specific sites rather than randomly as long thought - and that many of the breakage hotspots are also involved in human cancer.

In a study published in the July 22 issue of the journal Science, a team of 25 scientists from the United States, France and Singapore compared the organization of the chromosomes of eight mammalian species: human, mouse, rat, cow, pig, dog, cat and horse. Using sophisticated computer software to align and compare the mammals' genetic material, or genomes, the team determined that chromosomes tend to break in the same places as species evolve, resulting in rearrangements of their DNA. Prior to the discovery of these breakage hotspots, the prevailing view among scientists was that such rearrangements occurred at random locations.

Chromosomes are the threadlike "packages" of DNA located in the nucleus of each cell. When cells divide, a chromosome occasionally breaks and the fragment can get stuck onto another chromosome. In addition, fragments may break off from two different chromosomes and swap places.

Chromosomal breakages, also referred to as translocations, are thought to be important in terms of evolution. When chromosomes break in egg or sperm cells, opportunities arise for the rearrangement of DNA in the resulting offspring. Such inheritable rearrangements may be lethal or cause disease. However, in some cases, the breaks may lead to the production of new or altered proteins with potential to benefit an organism. In addition to their evolutionary implications, chromosomal translocations are known to contribute to the development or progression of many types of cancer.

"Science tells us that the most effective tool we currently have to understand our own genome is to compare it with the genomes of other organisms. With each new genome that we sequence, we move closer to filling the gaps in our knowledge," said Dr. Ostrander, who is chief of the Cancer Genetics Branch in NHGRI's Division of Intramural Research.

The multi-species comparison published in Science also yielded surprising results about the rate at which chromosomal evolution occurs. Based on an analysis that included a computer-generated reconstruction of the genomes of long-extinct mammals, researchers found the rate of chromosomal evolution among mammals dramatically accelerated following the extinction of the dinosaurs about 65 million years ago.

Before the sudden demise of dinosaurs and many other types of animals, which is thought to have resulted from a massive comet or asteroid striking Earth, mammals shared fairly similar body plans and also fairly similar genomes. Researchers speculate that the mass extinction opened new ecological niches for mammals, spurring their diversification and the emergence of new mammalian orders. This situation would have facilitated opportunities for the isolation of mammals into more distinct breeding groups, speeding the development of species-specific chromosomes.

"This study has revealed many hidden secrets on the nature and timing of genome evolution in mammals, and it demonstrates how the study of basic evolutionary processes can lead to new insights into the origin of human diseases," said Dr. Lewin, who is director of the Institute for Genomic Biology at the University of Illinois at Urbana-Champaign.

To learn more about the rapidly growing field of comparative genomics, go to: www.genome.gov/11509542/comparative-genomics-fact-sheet/. The genomes of a number of organisms have been or are being sequenced by the large-scale sequencing capacity developed by the Human Genome Project, which was led in the United States by NHGRI and the Department of Energy. A complete list of organisms and their sequencing status can be viewed at Approved Sequencing Targets.

High-resolution photos of dog, cat, cow, rat and other organisms under study by NHGRI's Large-Scale Sequencing Program are available at: www.genome.gov/dmd.

NHGRI is one of the 27 institutes and centers at NIH, an agency of the Department of Health and Human Services. The NHGRI Division of Intramural Research develops and implements technology to understand, diagnose and treat genomic and genetic diseases. Additional information about NHGRI can be found at its Web site, www.genome.gov.