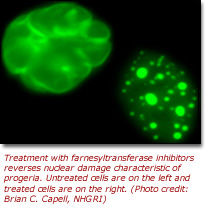 BETHESDA, Md., Mon., Aug. 29, 2005 - In a surprising development, a research team led by the National Human Genome Research Institute (NHGRI), part of the National Institutes of Health (NIH), has found that a class of experimental anti-cancer drugs also shows promise in laboratory studies for treating a fatal genetic disorder that causes premature aging.

In a study published Monday in the online edition of the Proceedings of the National Academy of Sciences (PNAS), Brian Capell and his colleagues at NHGRI reported that drugs known as farnesyltransferase inhibitors (FTIs), which are currently being tested in people with myeloid leukemia, neurofibromatosis and other conditions, might also provide a potential therapy for children suffering from Hutchinson-Gilford Progeria Syndrome, commonly referred to as progeria. A related study from Stephen Young, M.D., and colleagues at the University of California at Los Angeles is being published in the same issue of PNAS. 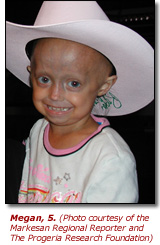 There are currently no treatments for progeria, which is a genetic disorder estimated to affect one child in 4 million. When they are born, children with progeria appear normal. But, as they grow older, they experience growth retardation and show dramatically accelerated symptoms of aging - namely hair loss, skin wrinkling and fat loss. Accelerated cardiovascular disease also ensues, typically causing death from heart attack or stroke at about the age of 12.

"Our findings show that FTIs, originally developed for cancer, are capable of reversing the dramatic nuclear structure abnormalities that are the hallmark of cells from children with progeria. This is a stunning surprise, rather like finding out that the key to your house also works in the ignition of your car," said NHGRI Director Francis S. Collins, M.D., Ph.D., who is the study's senior author.

The new work involved using FTIs to treat skin cells taken from progeria patients and grown in laboratory conditions. If upcoming studies in a mouse model validate the results of the cell experiments and translate into improvements in the animals' conditions, a clinical trial of FTIs in children with progeria may begin as early as next spring, researchers said.

Dr. Collins and his colleagues discovered in April 2003 that mutations in the lamin A (LMNA) gene cause progeria, spurring renewed interest among researchers to study this rare syndrome. Among those were Capell, a New York University medical student participating in the Howard Hughes Medical Institute/NIH (HHMI/NIH) Research Scholars Program. In July 2004, he joined Dr. Collins' lab and immediately set his sights on understanding the molecular basis of progeria.

"What really interested me in this research in the first place were the potential links to aging and atherosclerotic disease," said Capell. Indeed, understanding progeria at the molecular level may illuminate the general processes involved in normal human aging.

The LMNA gene codes for a protein called lamin A, which constitutes a major component of the scaffold-like network of proteins just inside the cell's nuclear membrane, called the lamina. The gene mutation implicated in progeria causes a section of 50 amino acids within the lamin A protein to be deleted, resulting in a mutated protein that is called progerin. This protein fails to integrate properly into the lamina, thereby disrupting the nuclear scaffolding and causing gross disfigurement of the nucleus. Cells with progerin have a nucleus with a characteristic "blebbed," or lobular, shape.

To find its way to the lamina, lamin A carries two tags, rather like ZIP codes, that help to direct the protein's travels. One tag at the end of lamin A instructs another protein to modify it through a process called farnesylation. Farnesylation tethers lamin A to the inner nuclear membrane. Once there, a second tag within the protein signals an enzyme to cleave off the terminal portion of the protein, including the farnesyl group, freeing lamin A to integrate properly into the nuclear lamina.

Because progerin carries the farnesylation tag but lacks the second cleavage tag, Capell speculated that progerin was becoming permanently stuck to the inner nuclear membrane. There, he suspected, it enmeshed other scaffolding proteins, preventing their proper integration into the lamina. If progerin's tendency to stick to the inner nuclear membrane is indeed the culprit in nuclear blebbing and the root of the progeria defect, Capell and his colleagues reasoned that they could prevent these defects by blocking farnesylation of progerin.

The researchers' hunch proved correct. When they changed one amino acid within progerin's farnesylation tag to prevent the addition of a farnesyl group and tested the effect in cells grown in the laboratory, progerin did not anchor itself to the inner nuclear membrane and instead clumped within the nucleus. Moreover, they observed no nuclear blebbing.

The researchers then tried treating the cells carrying progerin with FTIs, which are drugs originally developed to inhibit certain cancer-causing proteins that require farnesylation for function. FTIs are now being tested in phase III clinical trials of patients with myeloid leukemia. So far, clinical trials using FTIs have found little toxicity, even when the drug treatment significantly raises levels of unfarnesylated proteins.

In addition to Capell and his colleagues in NHGRI's Genome Technology Branch, researchers from the University of North Carolina at Chapel Hill and the University of Michigan School of Public Health in Ann Arbor took part in the study.

A high resolution photo of the progeria cell changes brought about by FTI is available at: www.genome.gov/dmd.

NHGRI is one of the 27 institutes and centers at NIH, which is an agency of the Department of Health and Human Services. The NHGRI Division of Intramural Research develops and implements technology to understand, diagnose and treat genomic and genetic diseases. Additional information about NHGRI can be found at its Web site: www.genome.gov.