BETHESDA, Md., Wed., Oct. 5, 2005 - The National Institutes of Health (NIH) today announced contracts that will give researchers unprecedented access to two private collections of knockout mice, providing valuable models for the study of human disease and laying the groundwork for a public, genome-wide library of knockout mice.

Under terms of three-year contracts jointly funded by 19 NIH institutes, centers and offices, Deltagen Inc. of San Carlos, Calif., and Lexicon Genetics Incorporated of The Woodlands, Texas will provide NIH and its scientific partners with access to extensively characterized lines of mice in which a specific gene has been disrupted, or "knocked out." In the first year of the contract, NIH will expend about $10 million to acquire about 250 lines of knockout mice.

For each mouse line, the contractors will provide not only the mouse line itself, but also detailed, objective data on the impact of the specific gene deletion on the mouse's phenotype, which includes appearance, health, fitness, behavior, ability to reproduce, and radiological and microscopic data. Such comprehensive information on such a large group of mice has never been available to public sector researchers, and is expected to greatly accelerate efforts to explore gene functions in health and disease.

"Our decision to procure these knockout mouse lines and data and make them available to the research community will yield tremendous benefits, both in the short and long terms," said NIH Director Elias A. Zerhouni, M.D. "This trans-NIH initiative will place important mouse models into the hands of researchers, speeding advances in the understanding of human disease and the development of new therapies. It also represents a significant step in the direction of launching an international project to systematically knock out all genes in the mouse." 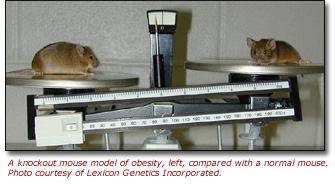 Since the early 1980s, when recombinant DNA technology was used to create the first such animals, knockout mice have proven to be one of the most powerful tools available to study the function of genes and to create mouse models of human disease. Researchers have produced knockout mice with characteristics similar to humans suffering from a wide range of disorders, including cancer, heart disease, neurological disorders and even obesity.

The process used by NIH to select the mouse lines involved a rigorous scientific review process that evaluated information on the knocked out gene, the reliability of the method used to produce the knockout, and whether the mouse line possesses a "reporter" gene, which enables researchers to analyze the pattern of the knockout gene's expression in various mouse tissues.

"This is exciting news for all researchers working to understand the complex underpinnings of human biology in health and disease. Knockout mice provide one of the quickest, most cost effective ways to explore gene function. It is essential that we make it possible for more researchers to tap into this power," said James Battey, M.D., Ph.D., director of the National Institute on Deafness and Other Communication Disorders. Dr. Battey serves as chair of the Trans-NIH Mouse Initiative, which develops priorities for mouse genomics and genetic resources at NIH.

The new contracts provide NIH with irrevocable, perpetual, worldwide, royalty-free licenses to use and distribute to academic and non-profit researchers these lines of knockout mice. The mouse lines, which will be stored in the form of frozen embryos, frozen sperm and frozen embryonic stem (ES) cells, will be delivered to NIH-funded mouse repositories that supply mice to universities, medical schools and research labs all over the world. When researchers express interest in obtaining a certain knockout mouse line, the repositories will send them live mice, frozen embryos, sperm, and/or ES cells, so they can study the mice in their own labs. All data on the mice will be made available to researchers worldwide without restriction in publicly available databases on the Web.

Under the license agreements with Deltagen and Lexicon, researchers who receive the knockout mice lines are free to publish any results from research involving the line and also to seek patent or other intellectual property protection for any of the inventions or discoveries resulting from such research.

In order to build upon the acquisition of knockout mice available from the private sector, the NIH in September issued a set of requests for applications to establish a Knockout Mouse Project. The ambitious goal of this trans-NIH program is to produce a comprehensive resource of mouse mutants in which every gene in the mouse genome has been knocked out. The resource will serve to further the value of the mouse as a powerful and important tool in the study of human health and disease.

For more information on what knockout mice are, how they are made and what they are used for, go to Knockout Mice. To download a high-resolution photo of a knockout mouse, go to www.genome.gov/dmd/img.cfm?node=Photos/Animals/Mouse&id=85349.

NIH is the steward of medical and behavioral research for the United States. It is an agency of the U.S. Department of Health and Human Services. For more information about NIH, go to www.nih.gov.