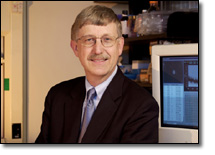 In recognition of his lifetime contributions to the understanding of human genetics and the medical implications of genetics research, NHGRI Director Francis S. Collins, M.D., Ph.D., received the Allan Award from the American Society of Human Genetics (ASHG) at the group's 55th annual meeting in Salt Lake City.

The award honors Dr. Collins for his pioneering work in developing strategies for identifying disease-causing genetic mutations, including those involved in cystic fibrosis, Huntington's disease, neurofibromatosis and progeria. It also recognizes the influential role that Dr. Collins, as leader of the Human Genome Project and director of NHGRI, has played in explaining and promoting human genetics research among scientists, health care professionals and the general public.

The Allan Award, which is the ASHG's most prestigious award, pays tribute to individuals who make substantial and far-reaching scientific contributions to the field of human genetics over a sustained period of scientific inquiry and productivity. The award consists of a medal and a $10,000 check presented at the ASHG's annual meeting, which is attended by more than 5,000 researchers, physicians and allied health professionals.