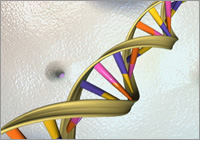 BETHESDA, Md., Thurs., Nov. 17, 2005 - Only days after the Sept. 11, 2001 attacks on the World Trade Center, the National Institutes of Justice (NIJ) convened a panel of experts from the National Institutes of Health (NIH) and other institutions, asking them to serve as an advisory panel to develop a process to identify victims using DNA collected at the site of the tragedy. Today, in an article published in the journal Science, the panel reports that DNA-based efforts led to the identification of more than one-quarter of those reported missing. The article also makes recommendations to improve DNA identification in event of future terrorist attacks or mass disasters.

In their Science paper, panel members report that they have been able to identify about 850 of the 2,749 people reported missing after the World Trade Center attacks based solely on DNA results. In conjunction with New York City's chief medical examiner, the panel has determined that no further identifications can be made at this time using the DNA samples collected.

"This effort presented the group with some overwhelming challenges in the face of such an unprecedented tragedy, but they came together at this time of national crisis and developed a process that provided better results than many would have expected. We owe them a debt of gratitude for providing the scientific expertise and compassion needed to help families and friends identify their loved ones," said NIH Director Elias A. Zerhouni, M.D.

KADAP was organized and funded by the NIJ, the research, development and evaluation agency of the U.S. Department of Justice, based on a request from New York City's chief medical examiner. The New York State Police Forensics Identification Center was responsible for analyzing any reference DNA samples and several private laboratories tested samples from the World Trade Center site. The final identifications were made by the Office of Chief Medical Examiner of New York City. The panel included experts in forensics, bioinformatics, molecular and medical genetics, and statistical and population genetics.

"It was a significant challenge, but the group was dedicated to the difficult task at hand. Our motivation was to help the medical examiner return to the families physical remains of their family members who perished in the World Trade Center attacks to assist them in the long and difficult process of grieving," said Dr. Biesecker.

"I'm very proud of the NHGRI researchers who contributed their time and scientific expertise to this effort during our nation's time of need," said NHGRI Scientific Director Eric D. Green, M.D, Ph.D.

Most of the identifications were made using a standard testing method used in forensic science. However, because some of the DNA samples were not in perfect condition, several technical improvements had to be made to provide more useful DNA samples. In addition, other methods of DNA identification were used to assist in the effort.

The panel also makes suggestions on how to improve DNA-based identification efforts in the event of any future mass disasters or terrorist attacks. KADAP members recommend that, based on their experience with the World Trade Center effort, similar panels should identify the criteria for determining when an identification effort should be concluded, especially if it is deemed that no further progress can be made. Other recommendations include: conducting more research to develop more sensitive forensic DNA typing systems; improving software to integrate analytical, database and workflow functions; and designing processes to test and validate novel identification procedures as they are being developed.

At the time of the Sept. 11 attacks, no infrastructure existed for the rapid identification of large disasters with more than 500 victims. Previously, many mass fatality identification efforts, such as those following airline crashes, began with a finite list of victims. However, in the case of the World Trade Center attacks, the exact number and identity of the victims was unknown.

More than 20,000 tissue fragments were collected at the site - all of which had to be catalogued and analyzed. Researchers found that the DNA derived from the tissue fragments was often mixed with inorganic building material. In addition, much of the DNA was compromised due to exposure to horrific conditions at the disaster site, including temperatures exceeding 1,800 degrees Fahrenheit. Complicating matters further was the need for reference DNA samples to compare with DNA from tissue found at the World Trade Center site. Panel members moved rapidly to develop the forms and kits needed to enable the medical examiner's office to collect reference DNA from victims' previously stored medical specimens, such as blood; victims' personal effects, such as hair brushes; or from the blood or cheek swabs of their next of kin. The kit included a brochure, "How DNA Can help Identify Individuals," which was developed by NHGRI and NIJ, and adopted as part of the President's DNA initiative, a five-year, $1 billion commitment to improve the nation's capacity to use DNA evidence. This brochure has been utilized by other state medical examiner offices and in foreign countries.

A new information technology infrastructure had to be established to optimize data transfer between the state police and medical examiner's office, as well as to interconnect the databases and analytical tools used by panel members. In addition, a data repository was established at the National Center for Biotechnology Information of the National Library of Medicine in Bethesda, Md., which could be used by analysts outside of the medical examiner's office. Software companies were hired to create new tools for matching the DNA fingerprints of victims' samples to those of next-of-kin or other reference samples. There was a low tolerance for errors and the group set stringent statistical thresholds to make the identifications with high confidence.

The NIJ plans to publish its own report outlining lessons learned from the work of the panel to serve as a model for other mass casualty DNA investigations. Authorities have already used the report to help identify victims of last year's South Asian tsunami and of hurricane Katrina.