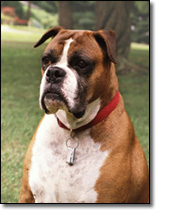 Washington, Wed., Dec. 7, 2005 - An international team, led by researchers at the Broad Institute of MIT and Harvard, today announced the publication of the genome sequence of the dog. In the Dec. 8 issue of the journal Nature, the researchers present a detailed analysis of the dog genome and describe how the data offer the potential for improving the health of man and man's best friend.

"When compared with the genomes of human and other important organisms, the dog genome provides a powerful tool for identifying genetic factors that contribute to human health and disease," said Francis S. Collins, M.D., Ph.D., director of the National Human Genome Research Institute (NHGRI), which supported the research. "This milestone is especially gratifying because it will also directly benefit veterinary researchers' efforts to better understand and treat diseases afflicting our loyal canine companions."

Efforts to create the genetic tools needed for mapping disease genes in dogs have gained momentum over the last 15 years, and already include a partial survey of the poodle genome. More than two years ago, Kerstin Lindblad-Toh, Ph.D., co-director of the genome sequencing and analysis program at the Broad Institute, and her colleagues embarked on a two-part project to assemble a complete map of the dog genome.

In the first phase, they acquired high-quality DNA sequence covering nearly 99 percent of the dog genome, from a female boxer named Tasha. The boxer was chosen as a representative of the average purebred dog to produce what has become a reference sequence for the dog genome community. Using the sequence information as a genetic "compass," they navigated the genomes of 10 different dog breeds and other related canine species, including the gray wolf and coyote. In this sampling, they pinpointed tiny spots of genetic variation, called single nucleotide polymorphisms (SNPs), which serve as recognizable signposts that can be used to locate the causes of genetic disease.

"Of the more than 5,500 mammals living today, dogs are arguably the most remarkable," said senior author Eric Lander, director of the Broad Institute, professor of biology at MIT and systems biology at Harvard Medical School, and a member of the Whitehead Institute for Biomedical Research. "The incredible physical and behavioral diversity of dogs - from Chihuahuas to Great Danes - is encoded in their genomes. It can uniquely help us understand embryonic development, neurobiology, human disease and the basis of evolution."

Humans domesticated the dog, Canis familiaris, from gray wolves as long as 100,000 years ago. As a result of selective breeding over the past few centuries, modern dog breeds present a model of diversity. From 6-pound Chihuahuas to 120-pound Great Danes, from high-energy Jack Russell Terriers to mild-mannered basset hounds, and from the herding instincts of Shetland sheepdogs to pointers pointing, humans have bred dogs for desirable physical and behavioral traits. While such breeding practices aimed to preserve the preferred traits of one generation in the next, they also predispose many dog breeds to genetic disorders, including heart disease, cancer, blindness, cataracts, epilepsy, hip dysplasia and deafness.

Elaine A. Ostrander, Ph.D., chief of NHGRI's Cancer Genetics Branch, co-authored the Nature paper, along with postdoctoral research fellows, Heidi G. Parker and Nate B. Sutter. Dr. Ostrander's laboratory maps genes responsible for cancer susceptibility in canines and humans, including breast and prostate cancers. In addition, Dr. Ostrander was the lead author of the white paper that provided the biomedical rationale for sequencing the dog genome.

"The leading causes of death in dogs are a variety of cancers, and many of them are very similar biologically to human cancers." said Dr. Ostrander. "Using the dog genome sequence in combination with the human genome sequence will help researchers to narrow their search for many more of the genetic contributors underlying cancer and other major diseases."

While dogs occupy a special place in human hearts, they also sit at a key branch point, relative to humans, in the evolutionary tree. It was already known that humans share more of their ancestral DNA with dogs than with mice; the availability of the dog genome sequence has allowed researchers to describe a common set of genetic elements - representing about 5 percent of the human genome - that are preferentially preserved among human, dog and mouse. Rather than being evenly distributed, some of these elements are crowded around just a small fraction of the genes in the genome. Future studies of these clusters may give scientists the critical insight needed to unravel how genomes work.

Other interesting observations emerged from this cross-genome analysis. For example, the research group found that while different breeds show amazing physical diversity, they often share large segments of their DNA, likely reflecting their recent shared origin. As a result, genetic tools being developed at the Broad Institute and NHGRI for any one breed of dog are likely to be useful in genetic experiments in nearly any breed.

The international team of researchers also identified roughly 2.5 million single nucleotide polymorphisms (SNPs) sprinkled throughout the dog genome. SNPs are variations in the DNA code, some of which contribute to diseases or the overall health of a dog. SNPs also can be used to create a set of coordinates with which to survey genetic changes, both within and across dog breeds. These efforts revealed that individual breeds have maintained a large amount of genetic variability, despite their long history of restrictive breeding. In practical terms, this means that future efforts to locate disease genes in dogs can be much narrower in scope than comparable human studies, requiring a smaller number of genetic markers and DNA samples collected from the blood or cheek from only a few hundred dogs.

Scientists in the canine genetics community worldwide are currently tackling this problem by applying the knowledge gained from SNP analysis to find disease genes. To this end, the dog-owner community is an essential collaborator. "We deeply appreciate the generous cooperation of individual dog owners and breeders, breed clubs and veterinary schools in providing blood samples for genetic analysis and disease gene mapping," said Dr. Lindblad-Toh, who is the paper's first author. "Without their interest and help we could not be doing this work."

Sequencing of the dog genome was conducted as part of NHGRI's Large-Scale Sequencing Research Network, at an approximate cost of $30 million. Researchers can access the sequence data through the following public databases: Dog Genome Resources (http://www.ncbi.nlm.nih.gov/genome/guide/dog) at NIH's National Center for Biotechnology Information (NCBI); EMBL Bank (www.ebi.ac.uk/index.html) at the European Molecular Biology Laboratory's Nucleotide Sequence Database; UCSC Genome Browser (http://www.genome.ucsc.edu) at the University of California at Santa Cruz and (www.broad.mit.edu/mammals/dog) at the Broad Institute. The SNPs may be viewed at dbSNP (www.ncbi.nlm.nih.gov/projects/SNP) at NCBI and (www.broad.mit.edu/mammals/dog/) at the Broad Institute.

A high-resolution photo of Tasha, the boxer whose DNA was sequenced, is available at: www.genome.gov/dmd/img.cfm?node=Photos/Animals/Dog&id=79106 . To learn more about the rapidly expanding field of comparative genomic analysis, go to www.genome.gov/11509542/comparative-genomics-fact-sheet/. To read the white paper that outlines the scientific rationale and strategy for sequencing the dog genome, go to: www.genome.gov/sites/default/files/genome-old/pages/Research/Sequencing/SeqProposals/CanineSEQedited.pdf.