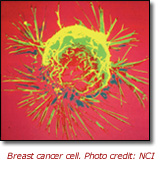 Bethesda, Md., Wednesday, Sept. 13, 2006 — The National Cancer Institute (NCI) and the National Human Genome Research Institute (NHGRI), both part of the National Institutes of Health (NIH), today announced the first three cancers that will be studied in the pilot phase of The Cancer Genome Atlas (TCGA) project. The cancers to be studied in the TCGA Pilot Project are lung, brain (glioblastoma), and ovarian. These cancers, which collectively account for more than 210,000 cancer cases each year in the United States, were selected because of the availability of biospecimen collections that met TCGA's strict scientific, technical, and ethical requirements.

"The selection of the first three cancer types to be studied by TCGA signals the scientific start of this initiative. Thanks to the tools and technologies developed by the Human Genome Project, scientists can collaborate to determine whether it will be possible to develop a useful atlas of the changes in the human genetic blueprint associated with all types of cancer," said NIH Director Elias A. Zerhouni, M.D.

NCI and NHGRI also announced today that the International Genomics Consortium, in collaboration with the Translational Genomics Research Institute, of Phoenix, Ariz., was selected to establish and manage TCGA's BCR. The BCR will collect, store, process, and distribute biomolecules from cancerous and normal samples to the Cancer Genome Characterization Centers and Genome Sequencing Centers for genomic analysis.

TCGA's Cancer Genome Characterization Centers will analyze samples from the BCR to identify key genomic alterations, such as copy number changes and/or chromosomal rearrangements, some of which are known to contribute to cancer development and/or progression. Selected genes will be sequenced by the Genome Sequencing Centers using high-throughput methods to identify small genomic changes, such as single base mutations and small insertion/deletions. TCGA Cancer Genome Characterization Centers and the Genome Sequencing Centers will be selected in the coming months.

"Cancer is exceedingly complex, and includes more than 200 different diseases. The overall goal of TCGA is to delve more deeply into the genetic origins that lead to this complexity, in order to enable the discovery and development of a new generation of therapies, diagnostics, and preventive strategies for all cancers," noted Acting NCI Director John E. Niederhuber, M.D. "Results from the TCGA Pilot Project may provide the results we need to detect cancer early, in its most treatable stage, and provide new targets for the development of specific therapies."

"The Cancer Genome Atlas will use cutting-edge technologies and knowledge from the Human Genome Project and other genomic studies to assess the range of genomic changes that cause the uncontrolled cell growth that characterizes cancer," explained National Human Genome Research Institute Director Francis S. Collins, M.D., Ph.D. "TCGA will analyze hundreds of tumor specimens with multiple technologies, including the comparison of genome sequences from the cancers with the normal DNA sequence derived from the same patients, in order to identify changes that are specifically associated with cancer."

The three cancers selected for study by TCGA were identified in a process that began in the fall of 2005 with a Request for Information (RFI) from NCI and notification to NCI Cancer Centers. The goal of the RFI was to identify candidate biospecimen collections that employed the highest level of ethical, technical, biologic, pathologic, and bioinformatics standards in the development of their biorepository.

The collections that qualified were evaluated in a three-stage process. The primary criteria addressed minimal requirements for the quality and quantity of the samples and the associated clinical information. Secondary criteria were then applied to effectively rank those tumor collections that met the primary criteria. Site visits to the biorepositories were then conducted by NCI and NHGRI staff. Critical factors for TCGA, such as timing, logistics, and the need for re-consent of patients, were factored into selection of the biorepositories to be considered. Finally, the biorepositories that emerged from this tiered process were further reviewed by an expert panel that included representatives from the surgery, research, pathology, bioethics, and patient advocate communities.

"The Cancer Genome Atlas Pilot Project is an important opportunity as we survey the potential future of cancer research. We must put aside our specific disease interests and channel our energy into the larger issues that can empower the cancer research enterprise to find new ways to improve outcomes for all cancer patients," said Doug Ulman, cancer survivor, chief mission officer of the Lance Armstrong Foundation, and chair of the NCI Director's Consumer Liaison Group.

Success factors for the TCGA Pilot Project include completion of genomic analysis of the three initial cancer types; identification of specific alterations in genes associated with cancer; and differentiation of cancer subtypes based on genomic changes. In addition, the pilot project will establish a publicly available integrated database that scientists can use to generate new knowledge through research. TCGA data will be made available through public databases supported by NCI's cancer Biomedical Informatics GridTM (caBIGTM) and the National Library of Medicine's National Center for Biotechnology Information (NCBI). TCGA data will be provided in a manner that meets the highest standards for protection and respect of the research participants.

"The Cancer Genome Atlas is a revolutionary project with the potential to provide cancer researchers the information needed to generate new hypotheses that can be tested in the laboratory and the clinic," said NCI Deputy Director Anna D. Barker, Ph.D. "Achieving the long-term goal of TCGA to identify all of the significant genomic changes in all cancers will benefit patients by enabling the discovery and development of the molecular biomarkers needed to develop targeted interventions to prevent and cure cancer."

Data from the TCGA Pilot Project will provide researchers and clinicians with an early glimpse of what promises to become an unprecedented, comprehensive "atlas" of molecular information describing the genomic changes in all types of cancer. TCGA will ultimately enable researchers throughout the world to analyze and employ the data to develop a new generation of targeted diagnostics, therapeutics, and preventives for all cancers, and pave the way for more personalized cancer medicine.

NCI and NHGRI are two of the 27 institutes and centers at NIH, an agency of the U.S. Department of Health and Human Services.

For more details about The Cancer Genome Atlas, please go to http://cancergenome.nih.gov.

More information about lung, brain and ovarian cancers can be found at:

For more information about cancer and the National Cancer Institute, please visit the NCI Web site at www.cancer.gov, or call NCI's Cancer Information Service at 1-800-4-CANCER (1-800-422-6237).