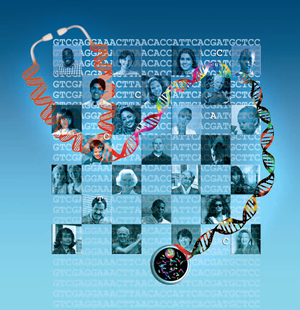 The National Human Genome Research Institute (NHGRI) has started the new year with a bang, offering about $90 million in new funding opportunities to continue its support of large genome sequencing and analysis centers that are the hallmark of its flagship NHGRI Genome Sequencing Program (GSP). The new grants place greater emphasis on the health and clinical applications of DNA sequencing and the creation of software tools that researchers can use to analyze immense data sets made possible by new sequencing platforms.

Over the last decade, the NHGRI Large-Scale Sequencing Program has been an engine for historic scientific discovery. In addition to successfully completing the human genome sequence, the program has also sequenced the genomes of bacteria, fungus, mice, rats and chimpanzees, humans' closest living relative. Sequencing the genomes of these organisms provides researchers critical insights into human biology.

The program has provided researchers with resources to better understand DNA changes in health and disease. These include detailed maps of genetic variation, efforts to identify the parts of the genome that affect the function of genes and medical sequencing projects to uncover genome changes that lead to inherited disease and common diseases such as cancer. Thanks to more efficient and cheaper next generation sequencing methods, the program has also contributed a great deal to understanding the human microbiome, the genomes of the microbes that live in and on the human body and changes in the epigenome, chemical marks that contribute to how the human genome may function and contribute to disease.

"We still have much to learn. These grants target efforts to understand the genomic basis for disease and ways to make sequence data relevant to individual patients and their doctors," said Adam Felsenfeld, Ph.D., program director for NHGRI's Large-Scale Sequencing Program. "At the same time, the program will continue to define state-of-the-art, large-scale sequencing and be a major contributor to the knowledge base that scientists need to make future advances in biomedicine and basic biology."

NHGRI has issued Request for Applications (RFA) for the Large-Scale Sequencing Program in four areas:

The shared deadline to apply for the RFAs above is March 3, 2011.