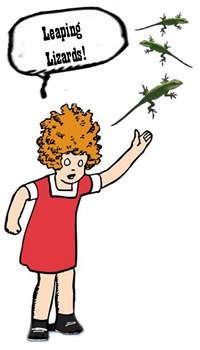 If Little Orphan Annie had a DNA sequencing machine at Daddy Warbucks' mansion, she would probably start by sequencing the genome of a lizard to see why it leaped. And, she might be interested to discover that some elements of the lizard genome are active, mobile and, yes, still leaping.

That's what researchers have discovered from analyzing the genome of the first lizard, the North American green anole. The results are published in the August 31 advance online publication of the journal Nature. The work was led by researchers at the Broad Institute of Harvard and MIT, which is supported in part by the National Human Genome Research Institute (NHGRI), part of the National Institutes of Health (NIH).

"NHGRI-supported researchers have sequenced and analyzed more than two dozen animals, from platypus to primates, to reveal the fundamental processes that have contributed to the evolution of mammalian genomes, including our own," said Adam Felsenfeld, Ph.D., program director of NHGRI's Large-Scale Genome Sequencing Program. "Comparisons between the genomes of different animals like the green anole lizard reveal conserved features, which in turn illuminate what portions of the genomes are likely to be functional."

The North American green anole lizard (Anolis carolinensis), is a native of the Southeastern United States. It is the first non-bird species of reptile to have its genome sequenced and assembled. Like mammals, lizards and birds are amniotes, which lay eggs that are protected by membranes. The green anole was selected because it may offer insights into how the genomes of humans, mammals, and their reptilian counterparts have evolved since mammals and reptiles parted ways 320 million years ago.

Researchers found that around 30 percent of the green anole genome is comprised of mobile elements, which are drivers of genome evolution. Such elements have a restless lifestyle often shuttling themselves from one chromosome to another and contributing to genomic innovations in the process. In humans, many of these so called "jumping genes" have lost their jumping ability, but they are still actively leaping in anole lizards.

"Anoles have a living library of transposable elements," said Jessica Alfödi, co-first author of the paper and a research scientist in the vertebrate genome biology group at the Broad Institute in Cambridge, Mass. "In anoles, these transposons are still hopping around, but evolution has used them for its own purposes, turning them into something functional in humans."

The researchers found many genes in the anole's genome associated with color vision, which the lizards rely on to identify choice mates (males and females of some species display vividly colored flaps of skin beneath their necks called dewlaps). The analysis shows that 11 of these genes, while present in fish, frogs, and even invertebrates, have been lost during mammalian evolution.

Additionally, the team finally identified the sex chromosomes of the lizard - something that researchers had only been able to hypothesize about before. Like mammals, green anoles appear to have XX and XY chromosomes (unlike birds, in which males have two identical sex chromosomes called ZZ and females have two different ones known as ZW). The lizard's X chromosome turned out to be one of its many microchromosomes.

Much like Darwin's finches, anoles adapted to fill all of the ecological niches the islands have to offer. Some lizards have short legs and can walk along narrow twigs; others are green in color with big toe pads suited for living high up in trees; others are yellow and brown and live in the grass. But unlike the finches, lizards on different islands have independently evolved diverse communities of these twig, canopy, and grass-dwelling species — almost identical lizard species have evolved in parallel on the islands of Hispaniola, Puerto Rico, Cuba and Jamaica.