Building a Biobank to Explore Mysteries of the Genome 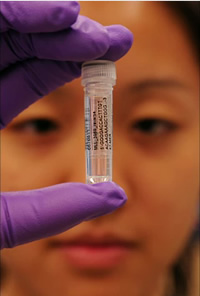 The architects of the biobank wanted nothing left to chance and everything well documented.

That's why they developed 150 standard operating procedures to ensure that tissue samples were collected, processed, and stored in exactly the same way. And they collected data on the best temperatures for shipping the samples across the United States.

All that planning is paying off for the Genotype-Tissue Expression (GTEx) project, which will use the samples to investigate how genes are regulated in health and disease. Sponsored by the National Institutes of Health (NIH), the project has nearly 4,400 samples of "normal" human tissue from about 175 donors.

"This project is an attempt to understand how normal genetic variation influences the expression of genes throughout the body," said the study's leader, Dr. Jeffery Struewing of the National Human Genome Research Institute. NCI and the National Institute of Mental Health also have lead roles in the effort.

GTEx began as a pilot study to see if high-quality tissue samples could be collected from donors on a large scale. Investigators with NCI's cancer human Biobank (caHUB) and their many partners were responsible for acquiring and managing the biospecimens. Each donor has contributed, on average, 25 different kinds of postmortem tissues, including heart, muscle, and skin.

Based on the success of the pilot, the NIH Common Fund will scale up GTEx, with a goal of reaching 1,000 donors in 3 years. These larger numbers of donors and samples will be needed to have the statistical power to ask fundamental questions about the genome, the researchers said.

Ostensibly, every cell in the human body has the same complement of genes, but different types of cells activate, or express, these genes differently. For the first time, GTEx will allow researchers to investigate the influence of common genetic variants on the regulation of genes using a set of reference tissues.

"How a particular genetic variant might affect gene regulation in different tissues is a fascinating biology question, but it is also relevant in medicine," said Dr. Barbara Stranger of Harvard Medical School and Brigham and Women's Hospital, who studies the relationships between genes and complex disease but is not involved in GTEx.

"Healthy individuals will have some of the same regulatory processes as people with a complex disease," Dr. Stranger continued. Understanding these processes could provide information about a variety of diseases.

Normal tissue — that is, tissue with no signs of disease-is not routinely collected for research. And GTEx is the first attempt to systematically obtain up to 32 tissue types from individual donors on a large scale.

"No one really knew if this would work," said Dr. Sherilyn Sawyer, who co-led the development of the GTEx biobank and until recently was part of NCI's Office of Biorepositories and Biospecimen Research (OBBR). "So we're ecstatic that the infrastructure we put in place through caHUB has resulted in the specimens that have produced an amazing collection of data."

GTEx partners with organizations involved in tissue and organ donation in several cities. When an organ or tissue donor who is eligible for GTEx passes away, one of these organizations contacts the deceased person's family to ask permission to enroll their loved one in the study.

"It's a sensitive time, so care is taken," said Anna M. Smith of Frederick National Laboratory for Cancer Research, who works on ethical, legal, and regulatory affairs for GTEx. "It goes without saying that there would be no biobank without the donors and families."

Once specimens are collected, they are preserved and shipped to the Van Andel Institute in Grand Rapids, MI, which is the central repository of materials. By collecting, processing, and storing the tissue samples in a controlled and uniform way, the researchers hope to maintain them in a nearly natural state and minimize alterations.

"The quality of the biospecimen is extraordinarily important," said Dr. Sawyer. Collecting tissues with uniformly high RNA and DNA quality would help ensure that the information gained from analyzing the samples "would be as accurate to the biology of the tissues as possible," she explained.

To achieve quality results, the project scrutinizes tissue samples. "GTEx has a higher degree of quality-control management over the whole process than other projects we have done," noted Dr. Scott Jewell, who directs the Program for Biospecimen Science at the Van Andel Institute.

Whether the same amount of quality control that went into GTEx will be required for all biobank projects is not yet known, Dr. Jewell added. But the lessons learned from GTEx could guide future efforts. Toward this end, researchers have released approximately 150 standard operating procedures related to biobanking.

"This project turned out to be a hugely complex logistical challenge," said Dr. Jim Vaught, deputy director of OBBR. But with these challenges have come opportunities to ask important questions about biobanking.

"Unless the research is done and unless the data are generated, no one is ever going to know the answers," said Smith.

Another question of importance for biobankers is how long different tissues remain scientifically useful after the blood flow to an organ has been cut off. Some answers could come from the Broad Institute in Cambridge, MA, where researchers are conducting molecular studies for GTEx, including RNA sequencing, which is a measure of gene expression.

During the pilot study, Broad investigators observed a drop off in RNA quality that was linked to the interval between death and tissue collection. Degradation depends on the type of tissue and how much time has passed since blood flow to the tissue ceased, the researchers found.

"For some tissues, the RNA will stay good for many hours after blood flow to the organ stops," said Dr. Wendy Winckler, co-leader of the Broad GTEx team. "But in the pancreas and the spleen, for example, if you don't get the tissue within a few hours [after death] you're not going to get it."

Despite these challenges, the researchers are optimistic. "Getting biospecimens for any research project is a tremendous challenge," said Dr. Kristin Ardlie, also a leader of the GTEx work at the Broad. "We've been surprised by how well the process has worked in this project."

The Broad researchers deposit their data quarterly in the database of Genotypes and Phenotypes. Investigators can apply for access to the data, which have all been stripped of identifying information to protect the anonymity of the donors. In addition, the project plans to make residual biospecimens available to researchers in 2013.

Many Questions to Explore

GTEx data will likely be used to interpret genome-wide association studies. In recent years, these studies have identified inherited genetic variants associated with common diseases. The variants, however, often map to regions of the genome that lack any genes, raising questions among researchers about how the variants would influence disease risk.

A logical explanation could be that these variants are influencing the regulation of genes and thereby increasing the risk of disease.

"Many common variants associated with common human diseases may be more about affecting the regulation of gene expression than about changes in protein structure," said Dr. Nancy Cox of the University of Chicago, who is developing statistical tools for analyzing data generated by GTEx. "This is one reason we believe the GTEx project is so important."

With samples of so many tissues, GTEx could also help researchers understand the full range of effects on the body caused by a given disease. "A disease process might not be limited to one particular cell type or tissue type," said Dr. Stranger.

"People will be using data from this project for a long time and in different ways," she added. "There are all kinds of people waiting to see the GTEx results."

A Universe of Data

The GTEx project will more than triple its pool of donors in the next 3 years. Success will depend on a robust and flexible information technology (IT) system, noted Charles Shive, director of software development at the Frederick National Laboratory for Cancer Research.

A web-based application developed by Shive and his colleagues allows project members with various levels of access to data to communicate in real time and also monitor the progress of specimen processing and data collection. "We know where specimens are at all times in the GTEx pipeline," said Shive.

Pathologists review images of all tissue samples to assess the quality of biospecimens. Using the web application, pathologists can add their comments to "the universe of data associated with each sample," Shive said.

NIH just issued a "request for information" aimed at gauging researchers' interest in using GTEx biospecimens, the types of analyses being considered, the level of funding support that would be required and how well-suited the existing sample types are for the proposed analyses. For more information about this request, go to Request for Information (RFI) Regarding Potential Uses of Stored Biospecimens from the Common Fund GTEx Project