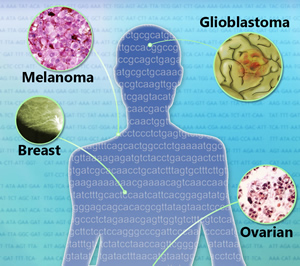 More than ever before, researchers are poised to reach across cancer treatment boundaries and are developing new plans of attack against a wide variety of diseases.

In May, The New York Times hinted at this, reporting on two new studies that detail the genomic landscapes of endometrial cancer and a type of leukemia called acute myeloid leukemia (AML). The Times - acknowledging that the findings showed dramatic similarities among endometrial, ovarian and breast cancers - suggested this was the "most telling evidence yet that cancer will increasingly be seen as a disease defined primarily by its genetic fingerprint rather than just by the organ where it originated."

The two studies mentioned are part of The Cancer Genome Atlas (TCGA), a multimillion dollar effort begun in 2008 to unravel the genomic aberrations behind many types of cancer. TCGA is a collaboration jointly supported and managed by the National Cancer Institute (NCI) and the National Human Genome Research Institute (NHGRI), both parts of the National Institutes of Health (NIH).

As TCGA research papers were published on individual cancers - glioblastoma, breast, ovarian and others - and genomic data started to accumulate, investigators began noticing similarities across cancers, patterns in the chaos. Every "marker paper" had its share of surprises, such as novel gene mutations and new cancer subtypes. But, all too often and as expected, researchers repeatedly encountered the same alphabet soup of misbehaving genes and pathways - TP53, RAS/RTK, and HER2, to name a few - that primarily sabotaged control of cell division, growth and development.

Rather than silo each cancer by organ site, as had been done historically, scientists are now finding a new way to pool all of this information and see commonalities among disease types. This theme - similarities among cancers - is central to a project called the Pan-Cancer initiative.

Pan-Cancer was launched in 2012 as a next logical step in TCGA studies. In September, the Pan-Cancer project, armed with TCGA genomic data from more than 5,000 tumor samples in 12 cancer types, was announced to the world in publications in several journals.

The first round of Pan-Cancer papers included two research papers in Nature Genetics that showed, among other things, that a limited number of genetic alterations are responsible for most cancer subtypes, and that mutations most often occur in certain regions in the genome. In the newest Pan-Cancer study, researchers surveyed nearly 5,000 tumors from 21 different cancer types, uncovering more than 30 new cancer genes. Their results - reported online on January 5 in Nature - indicate that many more cancer genes have yet to be identified, meaning additional tumor samples and cancer types need to be analyzed to develop a comprehensive cancer gene catalog. Such a catalog may ultimately help shape personal treatment approaches.

While TCGA marker papers continue to uncover more potential drug targets for individual cancers, the Pan-Cancer reports are increasingly creating topographic maps across cancers, with biological mountains and valleys, charting the roads that therapies might take. Such maps have the potential to change the way researchers and clinicians understand and attack cancer. As researchers point a finger at the guilty cancer genes, proteins and pathways, they also hope to understand their behavior and learn how to control the cancer process. Rather than attacking individual genes or protein targets, they hope to launch a global assault from different vantage points.

"The Pan-Cancer project is showing us for the first time what is different and what is shared among cancers, and is helping us put everything into a common picture," said Charles Perou, Ph.D., the May Goldman Shaw Distinguished Professor of Molecular Oncology, and professor of genetics, and pathology and laboratory medicine at the Lineberger Comprehensive Cancer Center, University of North Carolina at Chapel Hill. "That is fundamental information that is laying the groundwork for future research and treatment strategies."

For example, he said, scientists and clinicians have "hinted at similarities among basal-like subtype breast tumors, and ovarian and lung squamous cancers for years, but now we can say that genomic changes - changes in the gene p53, the number of gene copies and expression signatures - are all being seen together and uniquely in these three groups."

Most of the "clearly druggable targets" are known, said Dr. Perou, who is a breast cancer specialist. "Now, we are in the next phase of examining other, more indirect targets in pathways, and entire chromosome regions instead of only single genes. Pan-Cancer studies are helping us place these newer kinds of targets in the context of the larger cancer picture."

Scientists and clinicians hope that Pan-Cancer studies will ultimately help provide insights for new treatment approaches, though the approaches will be multifaceted, rather than a one-size-fits-all approach to cancer therapy.

"Despite the many crossing patterns we are seeing, if you look at 100 patients with the same type of cancer, you'll find many similarities and differences. There are many roads to cancer," said Richard Wilson, Ph.D., director of the Genome Institute at Washington University in St. Louis.

Genomic profiling of tumors is already becoming routine oncology practice, particularly in some larger centers. Patients can have their tumors profiled for a range of known mutations and alterations, and certain therapies can be ruled out, and others tried.

Dr. Perou said that TCGA Pan-Cancer studies and other genomic analyses of tumors might mean new classifications - and in some cases, changes in cancer diagnoses and therapies - for perhaps as many as 15 percent of cancer patients. Clinical trials could be reformulated according to these newer classifications.

In some cases, clinical trials have already begun to change, according to Douglas Levine, M.D., a gynecologic oncologist at Memorial Sloan-Kettering Cancer Center (MSKCC) in New York. Dr. Levine helped lead the TCGA projects on ovarian and endometrial cancers. At some larger institutions, for example, enrollment in early stage clinical trials is less based on the kidney, lung, colon or other organ site that is affected by cancer, and more on the specific genomic abnormalities seen in the tumor.

At MSKCC and elsewhere, one new approach is the "basket" trial. Rather than treating subtypes of disease only by site of origin, such trials test the effectiveness of a drug on a specific molecular abnormality seen in many different cancers. In a trial, patients with different types of cancer can be grouped into similar or separate baskets.

"In a basket trial, we would profile a patient's tumor and the patient would end up in a HER2, BRAF, EGFR or some other mutation basket," Dr. Levine said. While HER2 gene amplifications - meaning there are extra copies of the HER2 gene in cells - help drive 25 percent of all breast cancers, mutations in the HER2 gene are also found in a small number of breast cancers. However, the same alterations are also found in some bladder, lung and gastric cancers.

Such similarities are not guaranteed to make a difference in patient care. Clinicians and clinical studies have to show that the same drugs or cocktails of drugs have a similar impact on patients who carry the same key genomic alterations in different cancers. Drugs that are effective against melanomas that carry a mutation in the BRAF gene, for example, don't work well in colon cancers that harbor the same mutations.

"Pan-Cancer has highlighted pathways common to many cancers, and continuing studies will offer a way to dissect those pathways and help provide clues why one tumor responds to a drug but others do not," Dr. Levine said. "To help our patients, we want to find out who is responding and why."