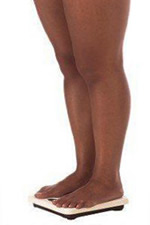 A large study by a consortium that includes researchers from the National Human Genome Research Institute's Center for Research on Genomics and Global Health has identified genome regions associated with body-mass index (BMI) among people with African ancestry. The two regions - and most likely a third genome site - are different from the 32 regions already found when similar studies were done with people of European ancestry, or the four such regions found in those with east Asian backgrounds. According to the study, there are notable racial and ethnic disparities in the prevalence of obesity in the United States; nearly 50 percent of African-American adults are classified as obese compared to 35 percent of non-Hispanic whites.

Genome-wide association studies sift through common genome variants in the DNA of groups of people who display a specific trait and then compare them with those who are unaffected. Researchers locate regions in the genome to assess the statistical probability of genomic cause and effect. In the current study, which appears in the April 12, 2013 advance online issue of Nature Genetics, the researchers included almost 40,000 men and women of African ancestry, the largest GWAS meta-analysis of African-ancestry populations so far.

BMI is a number calculated from a person's weight and height and is a reliable indicator of body "fatness" that is used by doctors and health trainers alike. It can be a screening tool for weight categories that may lead to health problems. While diet and activity contribute to BMI, the role of a person's genetic makeup in this health measure is becoming better understood.

The new study demonstrated that genome-wide association studies are important, especially in light of health disparities that exist among different population groups. The work did not assess which aspects of BMI-associated regions may contribute to prevalence of obesity, however.