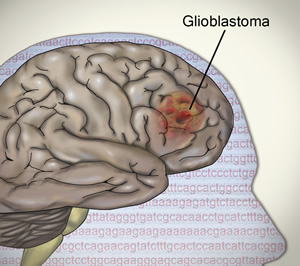 Investigators with The Cancer Genome Atlas (TCGA) Research Network have discovered new details about key genes, proteins and pathways in a common type of brain cancer that will kill 14,000 people this year. These findings, based on the most comprehensive genomic survey of glioblastoma multiforme (GBM) to date, may lead to a better understanding of the disease's development and growth and, ultimately, to new treatments and diagnostic targets. TCGA is jointly funded and managed by the National Human Genome Research Institute and the National Cancer Institute, both part of the National Institutes of Health (NIH).

Effective treatments for patients with GBM are urgently needed. More than 23,000 new cases of the brain cancer are expected in the United States in 2013. Most patients with the fast-growing GBM tumor die within 14 months of diagnosis.

"This new study provides a greatly needed comprehensive catalogue of molecular alterations in glioblastoma," said lead author Lynda Chin, M.D., chair of the Department of Genomic Medicine at the University of Texas MD Anderson Cancer Center, Houston, and an investigator at the Broad Institute of MIT and Harvard University, Boston. "These findings provide an important understanding of how to develop better and more appropriately targeted drugs in the future."  Dr. Chin and her collaborators published their findings in the journal Cell on October 10, 2013.

In 2008, GBM became the first cancer type that TCGA researchers systematically studied (http://www.genome.gov/27527925/2008-release-the-cancer-genome-atlas-reports-first-results-of-comprehensive-study-of-brain-tumors/). In the current complementary study, scientists - buoyed by newer, more powerful DNA sequencing technology - examined nearly 600 GBM samples (almost 400 more than in 2008). They discovered new details on mutations in genes that promote cancer, called oncogenes, and others that protect against cancer, known as tumor suppressor genes. In addition, they uncovered complex rearrangements of tyrosine kinases, important growth-promoting proteins that are potential therapeutic targets for GBM and a number of other cancers.

They identified novel, significantly mutated genes including LZTR1, SPTA1, ATRX, KEL and QKI, and found a pattern of mutations among genes implicated in regulating chromatin modification. Chromatin is a combination of DNA and protein within a cell's nucleus that is involved in regulating how genes are expressed. Mutations in chromatin remodeling genes - seen in more than 40 percent of GBM cases analyzed - have also been found in other types of cancer, such as endometrial, liver and gastric.

The investigators also confirmed the presence of mutations in genes for which targeted therapies have been developed, such as EGFR, BRAF, and FGFR. EGFR changes were particularly widespread; the gene was altered in 57 percent of the GBM samples analyzed. While researchers still hope to develop more effective treatments based on EGFR mutations, strategies will have to cope with the possibility that different alterations exist in the same tumor and might influence drug effectiveness.

Researchers also found frequent point mutations - or a substitution of one base for another among the four bases that comprise DNA - in the TERT gene. TERT helps produce telomerase, which prevent chromosomes from breaking down.

Other results provided new insights into GBM growth and behavior. The 2008 TCGA GBM study found biologically relevant alterations in three core pathways. Subsequent research has shown that combinations of various types of pathway alterations are often specific for different GBM subtypes. In this study, researchers showed that glioblastoma growth is driven by large signaling networks that may enable tumors to adapt to - and resist - targeted molecular treatments. They also showed that genomic alterations don't necessarily directly affect this protein signaling, challenging the widely held notion that inhibiting a part of a core biological pathway in GBM can be the same as directly targeting a mutated gene.

NIH established TCGA in 2005 to generate a comprehensive catalogue of non-heritable genomic changes in over 25 different types of cancer. The 2008 GBM study provided a proof-of-concept that systematic genomic analyses could define core biological pathways, substantiate previous smaller-study observations and generate unanticipated insights. At the start of the first GBM study, only 206 GBM tumor samples were available for analysis, and technology to probe those samples was comparatively rudimentary.

Since the inaugural TCGA publication on GBM, advances in genomic characterization technology have transformed the ability to characterize gene alterations with greater resolution and accuracy. For example, a type of sequencing technology that is able to read over 100 million sequences of DNA at a time is now part of the standard toolkit for characterization of tumors. TCGA has used these and newer technologies to describe the landscape of alterations in eight other tumor types.