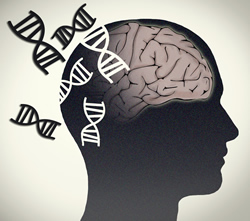 Bethesda, Md., Mon., Dec. 2, 2013 - Researchers can now freely access the first batch of genome sequence data from the Alzheimer's Disease Sequencing Project (ADSP), the National Institutes of Health (NIH) announced today. The ADSP is one of the first projects undertaken under an intensified national program of research to prevent or effectively treat Alzheimer's disease.

The first data release includes whole genome sequence (WGS) data from 410 individuals in 89 families. Researchers deposited completed WGS data on 61 families and have deposited WGS data on parts of the remaining 28 families, which will be completed soon.  WGS determines the order of all 3 billion letters in an individual's genome.  Researchers can access the sequence data at dbGaP (http://www.ncbi.nlm.nih.gov/gap or the National Institute on Aging Genetics of Alzheimer's Disease Data Storage Site (NIAGADS), https://www.niagads.org/.

"Providing raw DNA sequence data to a wide range of researchers proves a powerful crowd-sourced way to find genomic changes that put us at increased risk for this devastating disease," said NIH Director, Francis S. Collins, M.D., Ph.D., who announced the start of the project in February 2012. "The ADSP is designed to identify genetic risks for late-onset of Alzheimer's disease, but it could also discover versions of genes that protect us. These insights could lead to a new era in prevention and treatment."

As many as 5 million Americans 65 and older are estimated to have Alzheimer's disease, and that number is expected to grow significantly with the aging of the baby boom generation. The National Alzheimer's Project Act became law in 2011 in recognition of the need to do more to combat the disease. The law called for upgrading research efforts by the public and private sectors, as well as expanding access to and improving clinical and long term care. One of the first actions taken by NIH under the Alzheimer's Act was the allocation of additional funding in fiscal 2012 for a series of studies, including this genome sequencing effort. Today's announcement marks the first data release from that project.

Genome sequencing - determining the order of chemical letters in a cell's DNA - is considered a key strategy to identifying new clues to the fundamental cause of Alzheimer's disease and the development of new diagnostics and treatments. The clues come from differences in the order of DNA letters in Alzheimer's patients compared to control groups.

To carry out the ADSP, two NIH institutes - the National Human Genome Research Institute (NHGRI) and the National Institute on Aging (NIA) - formed a collaboration to manage patient samples and genome sequencing.  NHGRI has devoted $25 million in sequencing capacity at its three flagship centers: The Genome Institute at Washington University; the Human Genome Sequencing Center at the Baylor College of Medicine in Houston; and the Eli and Edythe L. Broad Institute of Harvard and MIT, Cambridge, Mass.

"NHGRI's expertise in managing large sequencing initiatives is a hugely important addition to the search for the genetic roots of late onset Alzheimer's disease," said NIA Director Richard J. Hodes, M.D. "Partnerships between NIH institutes, like this one between NIA and NHGRI, have proved a powerful strategy for focusing research resources on critical public health problems."

The sequencing centers will produce whole genome sequence of 582 subjects from 111 families in the Family Based Study, a collection of several different groups of patient cohorts.  The cohorts come from the NIH-Late Onset Alzheimer's Disease (NIA LOAD); the National Cell Repository for Alzheimer's Disease (NCRAD); Alzheimer's Disease Genetics Consortium (ADGC); and the Cohorts for Heart and Aging Research in Genomic Epidemiology (CHARGE), in addition to patient collections provided by several universities.

"Critical to this ambitious genomics project is the well-characterized patient resource developed by the National Institute on Aging," observed NHGRI Director Eric D. Green, M.D., Ph.D. "Such a partnership between our two institutes will be immensely helpful in establishing how best to use genome sequencing to elucidate the genomic contributions to complex genetic disorders such as Alzheimer's disease."

In addition to the WGS studies, the three sequencing centers also have begun whole exome sequencing on an additional 11,000 individuals - 6,000 affected individuals compared to 5,000 controls. Whole exome sequencing determines the order of genomic letters for the approximately 21,000 genes in the human genome, a considerably smaller data set than the 3 billion letters examined in WGS but intensely focused on the protein-producing genes.

The current deposit of genomic data includes phenotypes, such as the Alzheimer's symptoms of affected individuals, as well as family pedigrees and other demographic information. The rapid release of this community resource follows NIH's standard rules of data sharing, including requirements for consent and IRB approval. Prepublication release of the raw sequence data also follows The Bermuda Principles and the Ft. Lauderdale Large Scale Biological Sequencing Projects accord of 2003.

"These studies have been designed to have enough statistical power to discover both risk alleles and protective alleles," said Adam Felsenfeld, Ph.D., director of the NHGRI Genome Sequencing Program. "The analysis of this genomic data is just getting started, and we are looking forward to what we might learn."

Marilyn Miller, Ph.D., who heads the NIA's extramural Alzheimer's disease genetics program, said the large scope of the study is key to success in identifying new genes, and with it, potential targets for more effective interventions. "Because Alzheimer's is so complex, this broad-based collaborative effort, involving so many participants, will enable us to find potential solutions to tackle the disease."

The National Alzheimer's Project Act ordered the establishment of a National Plan to Address Alzheimer's Disease (http://aspe.hhs.gov/daltcp/napa/NatlPlan2013.shtml), which sets five primary goals. Its first goal - to prevent and effectively treat Alzheimer's disease by 2025 - specifically recognizes genetics research as key to achieving the plan's research goals, and a number of ongoing genetics projects are underway, including the NHGRI/NIA sequencing effort (http://www.nia.nih.gov/alzheimers/publication/2011-2012-alzheimers-disease-progress-report/).

The National Human Genome Research Institute is one of the 27 institutes and centers at the National Institutes of Health. The NHGRI Extramural Research Program supports grants for research and training and career development at sites nationwide. Additional information about NHGRI can be found at www.genome.gov.

The National Institute on Aging leads the federal government effort conducting and supporting research on aging and the health and well-being of older people. It provides information on age-related cognitive change and neurodegenerative disease specifically at its Alzheimer's Disease Education and Referral (ADEAR) Center at www.nia.nih.gov/Alzheimers.

National Institutes of Health (NIH): NIH, the nation's medical research agency, includes 27 institutes and centers and is a component of the U.S. Department of Health and Human Services. NIH is the primary federal agency conducting and supporting basic, clinical, and translational medical research, and is investigating the causes, treatments, and cures for both common and rare diseases. For more information about NIH and its programs, visit www.nih.gov.
NIH...Turning Discovery into Health