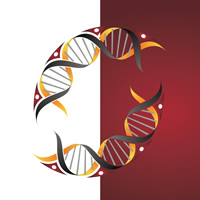 The National Congress of American Indians (NCAI), the National Human Genome Research Institute (NHGRI) and the National Museum of the American Indian (NMAI) convened a one-day symposium on June 23, 2014, to explore perspectives surrounding Native peoples and genomic research. A Spectrum of Perspectives: Native Peoples and Genetic Research was organized in association with the exhibition Genome: Unlocking Life's Code, currently on view at the Smithsonian's National Museum of Natural History.

Malia Villegas, Ed.D., director of the NCAI Policy Research Center (Sugpiaq/Alutiiq, Alaska Native) and Vence Bonham, J.D., chief of NHGRI's Education and Community Involvement Branch in the Division of Policy, Communications, and Education, engaged the symposium participants by framing the conversation.  Dr. Villegas encouraged symposium attendees to think about the interplay between the narratives of culture and science - narratives that could mistakenly frame indigenous cultures as non-technical, or describe science as acultural. "That is not the case," she said, citing the scientific insights that enabled her ancestors in Alaska and Hawaii to thrive despite extreme climates.   She added, "Those of us who work within science know that somebody's culture is always at work. It may not be ours, but there is certainly a cultural bent when it comes to science."

"We are bringing different perspectives into the conversation," Mr. Bonham said. He characterized the symposium as an honest discussion about issues dividing American Indian and Alaska Native communities and non-Native researchers. "This was not a symposium to say that genetics is bad or genetics is good," Mr. Bonham said. "It's not scripted and we are committed to having these conversations."

NHGRI researchers are deeply interested in the science of genomics and in the societal implications of genomic advances, NHGRI Director Eric D. Green, M.D., Ph.D., said during his introductory remarks. "Because of its power and its potential, we need to be cognizant about how genomics is used in studies involving communities with different values and different ideas. It is important for us to know what people are thinking, what their concerns are and how we can address those as the science moves forward."

The symposium featured four panel discussions, or conversations, catalyzed by 12 individual presentations from speakers who represented an array of tribal affiliations, scholarly disciplines and viewpoints. These conversations ranged from whether, and how, genetics research impacts Native health; genomics and ancestry; training and health career pathways for Native researchers; and a discussion of the ethics of blood. Interspersed question-and-answer times gave audience members an opportunity to engage in the discussions.

The audience and panelists broached a broad array of topics, from the importance for biomedical research to directly benefit Native communities, to concerns about research being conducted in ways that respect Native cultural values and traditions. Francine C. Gachupin, Ph.D., assistant director of the University of Arizona Cancer Health Disparities Institute, Tucson, (Pueblo of Jemez), presented during the panel, "Can genetics research improve Native health?" She said that it is important for researchers to communicate the distinction between offering a tribal member the opportunity to participate in a research study versus offering medical services, or patient care. She also addressed concerns about unwanted identification of participants in studies.

"Protecting participant data is really important," Dr. Gachupin said. "Tribes have been hurt by stigmatization, and so they are especially shy about having their names or place names in print form. Especially things that are talking about heritability, it is important to disguise the pedigrees because these communities sometimes are small and with one or two identifiers, they'll know who you are talking about."

Jeffrey A. Henderson, M.D., M.P.H., assistant clinical professor, University of Colorado Denver School of Public Health (Cheyenne River Sioux), founded the Black Hills Center for American Indian Health and is currently studying the genetics of smoking and nicotine dependence and metabolism in American Indians.  "Properly designed studies, namely candidate gene approaches, should be able to derive benefits for Native peoples and should be able to do so in our lifetimes," he said.

In the afternoon, a panel of Native researchers described their career pathways and achievements in health fields. Keolu Fox (Native Hawaiian) is pursuing a Ph.D. in genome sciences at the University of Washington School of Medicine; Deana Around Him, Dr.P.H. (Cherokee Nation) recently completed her doctorate through the Johns Hopkins Bloomberg School of Public Health; and Abigail Echo-Hawk (Pawnee Nation), associate director, Partnerships for Native Health, University of Washington, Seattle, works with American Indian and Alaska Native tribes across a five-state region to identify health priorities.

Discussion after the panel presentations focused on the need to diversify the health and biomedical workforce and to recruit Native researchers. Inclusion of Native people in the research efforts at various levels, as well as improving upon the small number of American Indians and Alaska Natives funded to conduct biomedical research, has the potential to remedy some cultural misunderstandings by including more of those who understand Native community perspectives as members of the scientific community.

Ms. Echo-Hawk, also described herself as a story teller of health. She told the story of her uncle - then a boy - being given a bag of marbles. He had never seen a marble used as a toy, so he dropped them into a frozen creek, one at a time, enjoying the noise that each made as it hit the ice. The story illustrated how, without knowledge of the context or the people, interventions meant to benefit communities might not have the intended impact. She also described learning from a survey of 200 American Indian and Alaska Native people, that there is a recognized need for research, but worry persists over who is controlling the research being conducted.

"Our communities want to be a part of preventing the kinds of health disparities that exist," Ms. Echo-Hawk said. "But the lack of knowledge of exactly what we're doing and how it impacts our communities isn't there." She works to address this problem by engaging members of Native communities in conversations about genetics and biomedical studies.

Speakers in the panel on genomics and ancestry drew upon an event that has taken on personal and societal significance. In 1968, a 12,600-year-old burial site in Montana was inadvertently excavated and fragmentary human remains were disinterred. Today, the site is one of the most important archeological discoveries in the Americas. Genome sequencing of the remains has illuminated what is now known about human inhabitation of the Western Hemisphere.

Shane Doyle, Ed.D., adjunct professor of Native American Studies at Montana State University (Crow Nation), has served as a liaison between tribes and researchers conducting a genomic study of these ancient remains. Sarah Anzick, Ph.D., senior research specialist at Rocky Mountain Laboratories in Hamilton, Montana, part of the National Institutes of Health (NIH), participated in the genomic study apart from her official job responsibilities. Of note, the remains were unearthed on land her family owns in Montana.

"I was uniquely positioned as a scientist and daughter of the landowner to potentially glimpse into the ancient past by understanding and trying to gain an understanding of the genome of one of America's earliest inhabitants," Dr. Anzick said. She felt the remains were a gift and had a story to tell, so she took on the role of ensuring that the remains were handled carefully, with respect and using a minimal amount of tissue.

Once sequenced, the remains were found to be that of a boy whose DNA, when compared with 143 modern populations that included 52 Native American populations, was found to be closely related to an estimated 80 percent of American tribes for whom DNA sequence exists.

When the results of the DNA study were shared with Montana tribes, the majority of the tribal members requested reburial of the ancient remains. Not one week after the symposium, on June 28, 2014, in a ceremony organized by Drs. Doyle and Anzick, the ancient boy's remains were reburied. Crow tribal elder Thomas Larson Medicine Horse, Sr., and representatives from five additional tribes presided at the two-hour reburial. Dr. Anzick carried the small, black chest containing the bones of the child wrapped in a red cloth to the reburial site.

"The fear of DNA research is like any fear," Dr. Doyle said. "Where I come from, when the winds blow hard, the buffalo point their faces into the wind. You don't turn your back away from it. I'm willing to look into it and, by doing that with others, we can make progress and go somewhere with it one step at a time."

In her closing remarks of the symposium, Dr. Villegas addressed the myth that Native people don't want to participate in science. "What you've heard in these conversations is that there is a genuine desire to learn, to use science if it is done in a meaningful way, but that there's a need for increased transparency and understanding of how data are being used." She explained that the symposium was not an isolated event. "This has been an ongoing conversation for communities, for agencies, for students, for teachers to be thinking about these questions for us as human beings," she said. "We look forward to continuing this."

NHGRI's partnership with the National Congress of American Indians includes collaboration on an online genetics resource guide for American Indians and Alaskan Natives. The guide is designed to provide Native communities with the tools they need to confidently make informed decisions about genetics research. To learn more about the guide, visit http://genetics.ncai.org.

To view video recorded portions of the symposium visit

A Spectrum of Perspectives: Native Peoples and Genetic Research.