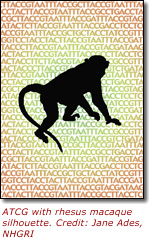 BETHESDA, Md., Thurs., April 12, 2007 - An international consortium of researchers has published the genome sequence of the rhesus macaque monkey and aligned it with the chimpanzee and human genomes. Published April 13 in a special section of the journal Science, the analysis reveals that the three primate species share about 93 percent of their DNA, yet have some significant differences among their genes.

In its paper, the Rhesus Macaque Genome Sequence and Analysis Consortium, supported in part by the National Human Genome Research Institute (NHGRI), one of the National Institutes of Health (NIH), compared the genome sequences of rhesus macaque (Macaca mulatta) with that of human (Homo sapiens) and chimp (Pan troglodytes), the primate most closely related to humans. Four companion papers that relied on the rhesus sequence also appear in the same issue.

The rhesus genome is the second non-human primate, after the chimp, to have its genome sequenced and is the first of the Old World monkeys to have its DNA deciphered.

"The sequencing of the rhesus macaque genome, combined with the availability of the chimp and human genomes, provides researchers with another powerful tool to advance our understanding of human biology in health and disease," said NHGRI Director Francis S. Collins, M.D., Ph.D. "As we build upon the foundation laid by the Human Genome Project, it has become clear that comparing our genome with the genomes of other organisms is crucial to identifying what makes the human genome unique."

The rhesus, because of its response to the simian immunodeficiency virus (SIV), is widely recognized as the best animal model for human immunodeficiency virus (HIV) infection. The rhesus genome sequence will also serve to enhance essential research in neuroscience, behavioral biology, reproductive physiology, endocrinology and cardiovascular studies. In addition, the rhesus serves as a valuable model for studying other human infectious diseases and for vaccine research.

The sequencing of the rhesus genome was conducted at the Baylor College of Medicine Human Genome Sequencing Center in Houston, the Genome Sequencing Center at Washington University School of Medicine in St. Louis and the J. Craig Venter Institute in Rockville, Md., which are part of the NHGRI-supported Large-Scale Sequencing Research Network. The DNA used in the sequencing was obtained from a female rhesus macaque at the Southwest National Primate Research Center (NPRC) in San Antonio, which is supported by the National Center for Research Resources, part of NIH.

Independent assemblies of the rhesus genome data were carried out at each of the three sequencing centers using different and complementary approaches and then combined into a single "melded assembly." In their analysis, scientists from 35 institutions compared this melded assembly to the reference sequence of the human genome, a newer unpublished draft sequence of the chimp genome, the sequence of more than a dozen other more distant species already in the public databases, the human HapMap, and the Human Gene Mutation Database that lists known human mutations that lead to genetic disease.

"This study of the rhesus genome is invaluable because it gives researchers a perspective to observe what has been added or deleted in each primate genome during evolution of rhesus, chimp, and the human from their common ancestors," said Richard Gibbs, Ph.D., director of Baylor College of Medicine's Human Genome Sequencing Center in Houston and the project leader.

One of the most useful features of the rhesus genome is that it is less closely related to the human genome than to the chimp genome. This means that important features that have been conserved in primates over time can be more easily seen by comparing rhesus to human, than chimp to human.

By adding the rhesus genome to the primate comparison, researchers identified nearly 200 genes likely to be key players in determining differences among primate species. These include genes involved in hair formation, immune response, membrane proteins and sperm-egg fusion. Many of these genes are located in areas of the primate genome that have been subject to duplication, indicating that having an extra copy of a gene may enable it to evolve more rapidly and that small duplications are a key feature of primate evolution.

The analysis also revealed a few instances in which whole families of genes were radically different in the rhesus, containing more copies of certain genes than in the chimp or human. These gene families include important immune related genes, as well as genes with functions not yet fully known.

In addition to comparing the rhesus with the chimp and human genomes, the group also studied genetic variation in macaque populations, and developed a set of "single nucleotide polymorphisms" or SNPs (single base DNA differences) that can be used for future analysis of inheritance of biomedically important traits in rhesus. The rhesus genomic DNA samples used for these studies were contributed by the California NPRC, Oregon NPRC, Southwest NPRC and Yerkes NPRC. This advance in macaque genetics will enhance the use of macaques for the study of genetic diseases of man.

The rhesus study is part of an ongoing program to analyze primate genomes. Other primate genomes underway include the marmoset, gibbon and gorilla. Researchers at the Baylor Center and the Washington University Genome Center completed the raw sequence for the orangutan and marmoset genomes early this year, and Washington University has deposited the assemblies at the Genome Sequencing Center [genome.wustl.edu]. Researchers plan to analyze the orangutan and marmoset genomes and compare them with the other primates over the summer.

The chimp, orangutan and human genome sequences, along with those of a wide range of other organisms such as mouse, rat, dog, cow, honey bee, roundworm and yeast, can be accessed through the following public genome browsers: GenBank (www.ncbi.nih.gov/Genbank) at NIH's National Center for Biotechnology Information (NCBI); the UCSC Genome Browser (www.genome.ucsc.edu) at the University of California at Santa Cruz; the Ensembl Genome Browser (www.ensembl.org) at the Wellcome Trust Sanger Institute and the EMBL-European Bioinformatics Institute; the DNA Data Bank of Japan (www.ddbj.nig.ac.jp); and EMBL-Bank, (www.ebi.ac.uk/embl/index.html) at the European Molecular Biology Laboratory's Nucleotide Sequence Database.