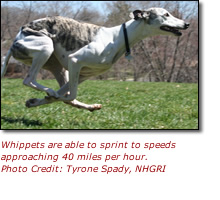 Whippets are bred for speed. These dogs have the appearance of a small greyhound and have been clocked sprinting to speeds approaching 40 miles per hour over a 200-yard racing course. Recently, scientists at the National Human Genome Research Institute (NHGRI), part of the National Institutes of Health (NIH), discovered a genetic mutation that helps to explain why some whippets run even faster than others.

In a study published online May 1, 2007 in PLoS Genetics, a research team led by Elaine A. Ostrander, Ph.D., chief of the Cancer Genetics Branch in NHGRI’s Division of Intramural Research, reports that a mutation in a gene that codes for a muscle protein known as myostatin can increase muscle mass and enhance racing performance in whippets.

Like humans, dogs have two copies of every gene — one inherited from their mother and the other from their father. Dr. Ostrander and her colleagues found that whippets with one mutated copy of the myostatin (MTSN) gene and one normal copy to be more muscled than normal and to account for a large share of the breed’s fastest racers. However, their research also showed that whippets with two mutated copies of the MTSN gene have a gross excess of muscle and are rarely found among competitive racers.

"Our work is the first to link athletic performance to a mutation in the myostatin gene and could have implications for competitive sports in dogs, horses and possibly even humans. However, extreme caution should be exercised when acting upon these results because we do not know the consequences for overall health associated with myostatin mutations," said Dr. Ostrander, who noted that dogs provide an excellent system in which to investigate genes associated with disease, behavior and other traits.

Whippets are medium-size dogs that have been bred for centuries for hunting, racing, show and companionship. Sometimes, litters of whippet puppies include heavily muscled offspring referred to as "bully" whippets that are prone to shoulder and thigh cramping. The bully whippet's muscle structure looks similar to "double muscling" previously observed in mice, cattle, sheep and in one case, a human. Previous research has linked mutations in the MTSN gene to the double muscled trait in these cases. To gain a better understanding of the MTSN gene in whippets and its role in racing performance, the NHGRI-led team undertook an analysis of whippet DNA samples collected through the efforts of breeders and owners.

In the bully whippets, the researchers found that both copies of the MTSN gene had a tiny mutation — a deletion of just two of the gene's 5,083 DNA bases. The deletion leads to the production of an abnormally shortened version of the myostatin protein.

Of the whippets that had bully whippet offspring, all had one normal and one mutated copy of the MTSN gene, or were "carriers" of the MTSN mutation. No mutations were found in the MTSN genes of the other whippets tested. The findings were confirmed by genetic testing of another 146 whippets.

Dr. Ostrander's group went on to investigate whether a dog's MTSN status correlated with its racing performance. Analysis of the racing records of 85 whippets entered in the study revealed a significant association between a dog’s genetic profile and its speed, as assessed by racing grade. There were significantly more carriers of the MTSN mutation among the fastest dogs.

The prevalence of the MTSN mutation among whippets appears to be a relatively recent phenomenon in the evolution of dogs, caused by selective breeding. "We found many more carriers of this mutation among the fastest whippets, since breeders inadvertently selected for this trait," said NHGRI's Dana Mosher, who is the study's first author.

To see if this MTSN mutation plays a role in muscle mass and speed in other types of dogs, the researchers sequenced DNA from multiple dogs from 14 additional breeds, including the greyhound. While the findings did not exclude the possibility that the mutation occurs in other breeds, researchers said it appears that the double muscle structure may be unique to the whippet breed.

The article is available online in PLoS Genetics and may be accessed at A Mutation in the Myostatin Gene Increases Muscle Mass and Enhances Racing Performance in Heterozygote Dogs [genetics.plosjournals.org].

A high resolution image of a whippet is available at http://www.genome.gov/dmd/img.cfm?node=Photos/Animals/Dog&id=79091.