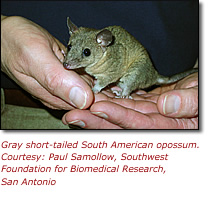 BETHESDA, Md., Wed., May 9, 2007 — An international team, led by researchers at the Broad Institute of MIT and Harvard, and supported by the National Institutes of Health (NIH), today announced the publication of the first genome of a marsupial, belonging to a South American species of opossum. In a comparison of the marsupial genome to genomes of non-marsupials, including human, published in the May 10 issue of the journal Nature, the team found that most innovations leading to the human genome sequence lie not in protein-coding genes, but in areas that until recently were referred to as "junk" DNA.

The effort to generate the high-quality genome sequence of the gray short-tailed, South American opossum, Monodelphis domestica, began in 2003 and cost approximately $25 million. The sequencing work was funded by the National Human Genome Research Institute (NHGRI), part of the NIH, and carried out at the Broad Institute Sequencing Platform, which is a member of NHGRI's Large-Scale Sequencing Research Network.

"The opossum genome occupies a unique position on the tree of life. This analysis fills a crucial gap in our understanding of how mammalian genomes, including our own, have evolved over millions of years," said NHGRI Director Francis S. Collins, M.D., Ph.D. "These new findings illustrate how important it is to understand all of the human genome, not just the fraction that contains genes that code for proteins. We must identify all functional elements in the genome if we are to have the most complete toolbox possible to explore human biology and improve human health."

Marsupials are unique among mammals because their young are born at an extremely early stage of development, attach to their mother's teats and complete their subsequent development while in a protective pouch. This makes the young readily available for early developmental research.

There are many other areas of biomedical research for which Monodelphis serves as a model. For example, it is the only laboratory animal known in which ultraviolet radiation alone can cause melanoma, a type of skin cancer that also strikes humans exposed to too much of the sun's ultraviolet rays. Having the sequence of the opossum genome will give researchers the ability to learn more about the molecular basis of melanoma and its progression, as well as explore development of new therapies and preventive treatments.

The opossum genome sequence also provides researchers with a fresh perspective on the evolutionary origins of the human genome. It sheds light on the genetic differences between placental mammals, such as humans, mice and dogs, and marsupial mammals, such as opossums and kangaroos.

"Marsupials are the closest living relatives of placental mammals. Because of this relationship, the opossum genome offers a unique lens though which to view the evolution of our own genome," said Kirstin Lindblad-Toh, Ph.D., co-director of the Broad Institute's genome sequencing and analysis program and the study's senior author.

Marsupials and the ancestors of placental mammals diverged 180 million years ago. By comparing the opossum and human genomes, researchers were able to pinpoint genetic elements that are present in placental mammals, but missing from marsupials - that is, the genetic factors that may underlie many of the differences between the two types of mammals.

Interestingly, about one-fifth of the key functional elements in the human genome arose during this relatively recent evolutionary period. By focusing on the recent genetic innovations, the scientists made two major findings:

"Transposons have a restless lifestyle, often shuttling themselves from one chromosome to another," said the study's first author Tarjei Mikkelsen, a Broad Institute researcher. "It is now clear that in their travels, they are disseminating crucial genetic innovations around the genome."

Other important findings to emerge from the analysis of the opossum genome include:

The opossum and human genome sequences, along with those of a wide range of other organisms such as mouse, rat, dog, chimpanzee, rhesus macaque, orangutan, cow, honey bee, fruit fly, roundworm and yeast, can be accessed through the following public genome browsers: GenBank (www.ncbi.nih.gov/Genbank) at NIH's National Center for Biotechnology Information (NCBI); the UCSC Genome Browser (www.genome.ucsc.edu) at the University of California at Santa Cruz; the Ensembl Genome Browser (www.ensembl.org) at the Wellcome Trust Sanger Institute and the EMBL-European Bioinformatics Institute; the DNA Data Bank of Japan (www.ddbj.nig.ac.jp); and EMBL-Bank, (www.ebi.ac.uk/embl/index.html) at the European Molecular Biology Laboratory's Nucleotide Sequence Database.

A high-resolution photo of the South American opossum is available at: www.genome.gov/dmd/img.cfm?node=Photos/Animals/Opossum%20(short_tailed)&id=79128.