Patients with Cardiovascular Disease to Participate in Genetic Sequencing Study 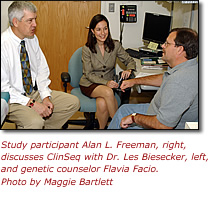 Over the next two years, the ClinSeq research team will enroll 1,000 people with the warning signs and symptoms - also known as phenotypes - of coronary heart disease. Researchers will use large-scale medical sequencing to gather detailed data about each participant's genetic makeup, and then analyze that data to see how individual genetic variations relate to the risk of coronary heart disease.

The participants, some of whom will be followed for up to 10 years, will include 45- to 65-year-old men and women. In addition to having their DNA sequenced, participants will be evaluated for coronary heart disease, which is a common condition with major public health implications. Researchers hope the individualized data generated by ClinSeq will help to better inform treatment approaches in the future.

"Science is advancing another step towards the age of genomic medicine," said Eric Green, M.D., Ph.D., National Human Genome Research Institute (NHGRI) scientific director and director of the NIH Intramural Sequencing Center (NISC), which will perform the sequencing for ClinSeq. "Sequencing has the potential to guide researchers investigating better strategies for disease diagnosis, treatment and prevention. As sequencing capabilities improve, including how we process the information, sequencing for medical purposes will have a role beyond being a research tool - it will help guide the delivery of care to patients."

"ClinSeq is the first study in which results from high-throughput DNA sequencing will be communicated back to individual patients," said Les Biesecker, M.D., chief of the NHGRI Genetic Disease Research Branch. The term "high-throughput" refers to the data-generating capacity required to sort through the 3 billion base pairs of information in the human genome. As principal investigator for ClinSeq, Dr. Biesecker heads a team of collaborating researchers from NHGRI; the National Heart, Lung, and Blood Institute; NIH Clinical Center; NISC; NIH Heart Center at Suburban Hospital, near NIH in Bethesda, Md.; and the National Institute of Biomedical Imaging and Bioengineering.

Large-scale medical sequencing can be used to analyze genes for the presence of important variants that contribute to the development of common human diseases. Genomic changes, such as single-base mutations and small insertions or deletions, can be detected, providing insight about an individual's predisposition to particular diseases.

This sequencing-based approach is particularly attractive because it can reveal not only common variants, which usually confer only a modest degree of susceptibility to disease, but also rare variants, which confer a greater risk of susceptibility to disease. ClinSeq researchers are interested in learning more about the relative contributions of common and rare variants to the development of common disease. Initially, ClinSeq will focus on some 200 to 400 genes that prior research suggests may be implicated in coronary heart disease. Genes for additional diseases will be analyzed later in the study.

Considering that each person's genome contains as many as 20,000 genes, just locating gene variants associated with coronary heart disease is a major challenge and an ongoing pursuit for genomics researchers. Still, looking ahead, ClinSeq eventually plans to employ recent advances in genomics that will push the envelope even further. In fact, ClinSeq participants will be the first among a number of heart study populations to consent to have their entire genomes sequenced if such comprehensive analysis becomes feasible and economical.

Flavia Facio, M.S., a genetic counselor and the lead associate investigator for the study, said, "The study has several goals, including detecting genetic changes that increase the risk for cardiovascular disease, developing the process by which genome sequencing can be used as part of medical care, and assessing if participants want to acquire genetic information about themselves and how they respond to such information."

Participants in the ClinSeq project undergo an initial clinical evaluation that includes an electrocardiogram and an echocardiogram at the NIH Clinical Center. They also undergo CT scan of their coronary arteries CT scan at the NIH Heart Center at Suburban Hospital, an NHLBI-affiliated center, to obtain a coronary calcium score. These tests provide a description of each subject's cardiovascular signs and symptoms, or phenotype. A small amount of blood is drawn during the patient's first visit. Some of the blood is used to purify genomic DNA, which is sent to NISC for high-throughput sequencing. Ultimately, the characteristics of the disease, or phenotypes, will be correlated with the genetic variants found by sequencing.

In addition to providing a personal medical history, each participant creates a profile of their family health history. Many diseases, such as cancer, diabetes and heart disease, can run in families. Family health data will be analyzed to identify disorders for which participants may be at risk and to guide discussion with participants about strategies for disease prevention.

"My family has lost some to heart attacks," said Alan L. Freeman, a 48-year-old electric utility company employee from Silver Spring, Md., who enrolled in January as ClinSeq?s first participant. Freeman was told about the ClinSeq project by his cardiologist, whom he was seeing for a heart checkup prompted by some undiagnosed chest pains.

"From what I know, it sounds absolutely fascinating to me," said Freeman, whose hobbies include golf, scuba diving and working around the house. "Just the thought of being a part of this study is too much to believe. You never know who this research might benefit."

ClinSeq participants are being classified into groups based on risk: those who already have coronary heart disease; those with a greater than 10 percent risk of developing coronary heart disease over the next 10 years; those with a 5 to 10 percent risk; and those with a risk of less than 5 percent. The risk scoring system, developed as part of the long-running Framingham Heart Study, is based on such factors as age, gender, blood pressure, cholesterol levels, smoking history and history of diabetes.

All of the DNA sequence data generated by ClinSeq will be organized by gene and by patient. Sequence variants will then be profiled and differentiated: those mutations likely to trigger disease versus innocent variations not involved in coronary heart disease. Only if the researchers have a strong measure of confidence in what the data reveals will they convey these results to the participants.

The researchers also will explain to participants how to interpret any individual genetic test results. "We will be making judgments about what information should and should not be returned to the participants," Dr. Biesecker said. "The right way to do this is to involve the patients in the process in a controlled, realistic environment. We will inform them about what we understand about their genes, and interact with them as the results become available."

How often participants return for further tests will depend on how many significant variants are detected. Each patient will receive a letter with the results of standard clinical laboratory analysis and evaluations, as well as recommendations for follow-up with their physicians.

Freeman's enthusiasm about study participation extends to the people he's met at NIH and the project they have described to him. In the week following his initial visit to the NIH Clinical Center, he spoke of the staff as "some of the nicest people I've ever met. They spelled out clearly what they wanted - blood and not tissue. You get thoroughly checked out.

"I am by nature curious," he continued. "I have been following human genome research because of my coronary problems and heart. Just the fact that they can look at a gene, and perhaps even treat you before a problem occurs - just the fact they are headed that way - fascinates me."

Of the goals of the ClinSeq researchers, Freeman reflects, "I may have a longer or better life with what they see. Hopefully, they will get as much or more out of it. You can never tell what they're going to discover."