Bethesda, Md., Thurs., Sept. 27, 2007 - Specific variations in two genes are linked to suicidal thinking that sometimes occurs in people taking the most commonly prescribed class of antidepressants, according to a large study led by scientists at the National Institutes of Health's (NIH) National Institute of Mental Health (NIMH). Depending on the particular mix inherited, these versions increased the likelihood of such thoughts from 2- to 15-fold, the study found. About 1 percent of adult patients were deemed to be at high genetic risk, 41 percent at elevated risk and 58 percent at lower risk.

If confirmed, the findings may hold promise for genetic testing, as more such markers are identified.

Risk increased proportionately if a participant had two, as opposed to just one of the suspect versions. Both genes code for components of the brain's glutamate chemical messenger system, which recent studies suggest is involved in the antidepressant response.

Francis J. McMahon, M.D., Gonzalo Laje, M.D., NIMH Mood and Anxiety Disorders Program, and colleagues at the National Human Genome Research Institute (NHGRI), Mount Sinai School of Medicine, and the University of Texas Southwestern Medical Center, report on their findings in the October, 2007 issue of The American Journal of Psychiatry.

"These data suggest that genetics may soon help us in our quest to individualize treatments for depression," said NIMH Director Thomas R. Insel, M.D.

"In the future, we hope that genetic testing will help doctors identify those few patients who are at high risk for suicidal thinking during antidepressant therapy and need close monitoring or alternative treatments," said McMahon. "This should help allay concerns for the vast majority of patients. The best way to prevent suicide is to treat depression."

In the most comprehensive study of its kind to date, McMahon and colleagues screened genetic material from 1,915 adult participants with major depression in level one of the NIMH-funded STAR*D (Sequenced Treatment Alternatives for Depression) trial. Study participants were treated with the selective serotonin reuptake inhibitor (SSRI) citalopram. The researchers looked for associations between self-reports of suicidal thinking and more than 700 sites in 68 suspect genes where letters in the genetic code vary across individuals, creating different versions of the same gene.

The researchers found that certain versions of two genes that code for glutamate receptors - the receiving stations for the neurotransmitter's chemical messages - were more prevalent in patients with suicidal thinking. How the newly identified versions affect the workings of glutamate receptors to confer increased risk remains to be discovered. It's also not yet known whether the findings generalize to other antidepressants.

Neither version was related to self-reported history of suicide attempts. This suggests that the versions are specific to suicidal thoughts that occur during antidepressant treatment, rather than the much more common suicidal thoughts and behavior that occur outside of the treatment setting.

More than 40 percent of those who developed suicidal thoughts lacked either of the two versions, indicating that other genes and environmental factors were also likely involved. But the potential value of predictive testing is increasing as more genes are analyzed. McMahon's group will report at a genetics conference in October on identification of additional versions that emerged from a scan of the whole genome in STAR*D patients. In July, NIMH funded researchers at Massachusetts General Hospital reported an association between variations in the CREB1 gene and treatment-emergent suicidal thinking among men in the STAR*D sample.

Earlier studies had shown that about 4 percent of youth treated with antidepressants experience suicidal thinking compared with about 2 percent of those taking placebos.

The resultant climate of concern culminated in the 2004 Food and Drug Administration decision requiring that antidepressants carry a black box warning about risk of suicidal thinking for children and adolescents - and later proposing that it be extended to young adults up to age 24. In 2004, the Centers for Disease Control recorded the largest spike in youth suicide rates in 15 years. NIMH-funded researchers recently suggested that this may have been related to a drop in antidepressant prescriptions for youth. By contrast, they note that suicide rates reached a record low in 2004 for adults over 60, for whom antidepressant prescription rates continued to rise; this inverse relationship held with increasing age. A more definitive analysis must await release of 2005 U.S. suicide rate data later this year, researchers say.

McMahon and colleagues hope that the newly identified versions may prove useful in identifying patients who need closer monitoring, alternative treatments and/or specialty care - while reassuring those for whom antidepressants are appropriate. 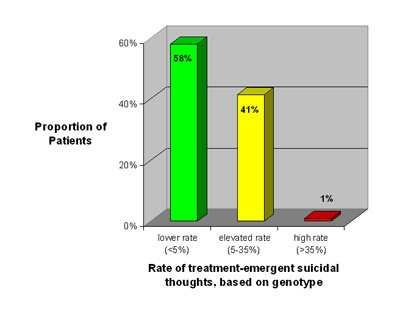 The National Institute on Alcohol Abuse and Alcoholism, part of the National Institutes of Health, is the primary U.S. agency for conducting and supporting research on the causes, consequences, prevention, and treatment of alcohol abuse, alcoholism, and alcohol problems and disseminates research findings to general, professional, and academic audiences. Additional alcohol research information and publications are available at www.niaaa.nih.gov.

The National Institute of Mental Health (NIMH) mission is to reduce the burden of mental and behavioral disorders through research on mind, brain, and behavior. More information is available at the NIMH Web site at www.nimh.nih.gov.

The National Institutes of Health (NIH) - The Nation's Medical Research Agency - includes 27 Institutes and Centers and is a component of the U.S. Department of Health and Human Services. It is the primary federal agency for conducting and supporting basic, clinical and translational medical research, and it investigates the causes, treatments, and cures for both common and rare diseases. For more information about NIH and its programs, visit the NIH Web site at www.nih.gov.