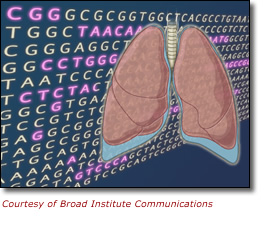 Bethesda, Md., Sunday, Nov. 4, 2007 – An international team of scientists, supported in part by the National Human Genome Research Institute (NHGRI), one of the National Institutes of Health (NIH), today announced that its systematic effort to map the genomic changes underlying lung cancer has uncovered a critical gene alteration not previously linked to any form of cancer. The research, published in the advance online issue of the journal Nature, also revealed more than 50 genomic regions that are frequently gained or lost in lung adenocarcinoma, the most common type of lung cancer in the United States.

"This view of the lung cancer genome is unprecedented, both in its breadth and depth," said senior author Matthew Meyerson, M.D., Ph.D., a senior associate member of the Broad Institute of MIT and Harvard in Cambridge, Mass., and an associate professor at Dana-Farber Cancer Institute and Harvard Medical School in Boston. "It lays an essential foundation, and has already pinpointed an important gene that controls the growth of lung cells. This information offers crucial inroads to the biology of lung cancer and will help shape new strategies for cancer diagnosis and therapy."

New approaches to cancer treatment rely on a deeper understanding of what goes wrong in tumor cells to spur uncontrolled growth. Through decades of research, it has become clear that lung cancer - like most human cancers - stems mainly from DNA changes that accrue in cells throughout a person's life. But the nature of these changes and their biological consequences remain largely unknown, which has inspired the recent formation of multi-disciplinary teams that are using new genomic tools and technologies to study cancer in a more systematic, comprehensive manner.

The latest study was conducted as part of the Tumor Sequencing Project (TSP), an ongoing effort to apply large-scale approaches to the identification of genomic changes in lung adenocarcinoma. NHGRI is a major funder of TSP, which unites scientists and clinicians throughout the cancer research community.

"This outstanding work clearly demonstrates the value of comprehensive approaches for exploring the genomic underpinnings of cancer. The impacts of these findings extend far beyond lung cancer and indicate that many more important cancer-related genes still await our discovery," NHGRI Director Francis S. Collins, M.D., Ph.D. "Now, we must forge ahead and apply this strategy as quickly as possible to other common types of cancer."

Specifically, the TSP researchers uncovered a total of 57 genomic changes that occur frequently in lung cancer patients. Of these changes, more than 40 appear to be associated with genes not previously known to be involved in lung adenocarcinoma. More research is needed to precisely identify and characterize these genes, but researchers are excited by the possibility that their findings may suggest new ways of attacking this deadly cancer.

The most common abnormality identified by the TSP team involves a region on chromosome 14 that encompasses two known genes, neither of which had been previously associated with cancer. Through additional studies in cancer cells, the researchers discovered that one of the genes, NKX2.1, influences cancer cell growth. NKX2.1 normally acts as a master regulator that controls the activity of other key genes in cells lining the lungs' tiny air sacs, called alveoli. The discovery that a gene functioning in a select group of cells - rather than in all cells - can promote cancer growth may have broad implications for the design of drugs for a wide range of cancers.

"The genomic landscape of lung cancer gives us a systematic picture of this terrible disease, confirming things we know, but also pointing us to many missing pieces of the puzzle. More broadly, the study represents a general approach that can and should be used to analyze all types of cancer," said Eric Lander, Ph.D., one of the study's co-authors and founding director of the Broad Institute of MIT and Harvard.

The TSP is helping to establish the groundwork for future large-scale cancer genome projects, including The Cancer Genome Atlas (TCGA). In December 2005, NHGRI and NCI launched the TCGA pilot to test the feasibility of a comprehensive, systematic approach to exploring the genomics of a wide range of common human cancers. In its pilot phase, TCGA is focusing on glioblastoma multiforme, the most common form of brain cancer; ovarian cancer; and squamous cell lung cancer, which, according to NCI, accounts for about 20 percent of lung cancer cases in the United States.

The TSP researchers studied more than 500 tumor specimens from lung cancer patients. Access to this large collection of high-quality samples made it possible to determine the genetic changes shared among different patients, which is important because shared changes can highlight important genes involved in cancer growth.

To analyze the DNA from each lung tumor, the scientists relied on recent genomic technologies to scan the human genome for hundreds of thousands of genetic markers, called single nucleotide polymorphisms, or SNPs. This high-resolution view helped researchers detect parts of the genome that were present in excess copies or missing altogether in the tumor samples. These regions of genomic aberration were then more finely delineated using new analytical tools, including a computational method called GISTIC and methods for visualizing SNP data.

In its second phase, TSP is examining the same lung tumor samples analyzed in the first phase, but at an even greater level of genetic detail. Using high-throughput DNA sequencing methods, the scientists will characterize small changes in the genetic code of several hundred human genes that function in cancer and more generally in cell growth.

"We look forward to applying the power of large-scale sequencing to this complex challenge," said Dr. Wilson, head of the Washington University Genome Sequencing Center. "By zeroing in on the genetic changes involved in lung adenocarcinoma, we hope to learn much more about this deadly cancer. This research should also lead to better strategies for identifying vulnerabilities within all types of cancerous cells."

Dr. Gibbs, head of the Human Genome Sequencing Center at Baylor, said, "This project has pulled together an amazing collection of scientific talent to tackle a most formidable opponent: lung cancer. By working together, we hope to generate data that will serve as an effective tool for developing new ways to detect, treat and, ultimately, prevent this disease."

All data generated by the TSP are being made available to the scientific community in public databases.

NHGRI and NCI are among the 27 institutes and centers at the NIH, an agency of the Department of Health and Human Services. Additional information about NHGRI can be found at its Web site, www.genome.gov and additional information about NCI can be found at www.cancer.gov. To learn more about The Cancer Genome Atlas, go to http://cancergenome.nih.gov.

The National Institutes of Health (NIH) - "The Nation's Medical Research Agency" - is the primary federal agency for conducting and supporting basic, clinical and translational medical research, and it investigates the causes, treatments and cures for both common and rare diseases. For more information about NIH and its programs, visit www.nih.gov.