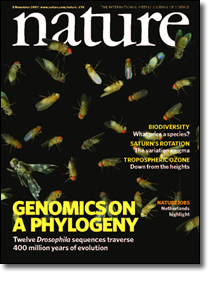 Bethesda, Md., Wed., Nov. 7, 2007 — An international research consortium of scientists, supported by the National Human Genome Research Institute (NHGRI), part of the National Institutes of Health (NIH), today announced publications comparing the genome sequences of 12 closely related fruit fly species, 10 of which were sequenced for the first time. The analyses identify thousands of novel genes and other functional elements in the insects' genomes, and describe how evolution has shaped the genomes of these important models for genetic research.

"This remarkable scientific achievement underscores the value of sequencing and comparing many closely related species, especially those with great potential to enhance our understanding of fundamental biological processes," said Francis S. Collins, M.D., Ph.D., director of NHGRI. "Thanks to the consortium's hard work, scientists around the world now have a rich new source of genomic data that can be mined in many different ways and applied to other important model systems as well as humans."

The fruit fly is one of the most important model organisms in genetic research. In studies dating back nearly a century, researchers used fruit flies to discover the basic rules of inheritance and to study how a single cell, the fertilized egg, develops into a whole animal. Because fruit flies are easy to work with in laboratory settings, they continue to be used as a model to study fundamental biological processes that occur in many living things, including humans.

Although fruit flies have a genome that is 25 times smaller than the human genome, many of the flies' genes correspond to those in humans and control the same biological functions. In recent years, fruit fly research has led to discoveries related to the influence of genes on diseases, animal development, population genetics, cell biology, neurobiology, behavior, physiology and evolution.

In papers published in the journal Nature, the Drosophila Comparative Genome Sequencing and Analysis Consortium compare the genome sequences of Drosophila melanogaster, which was published in 2000, and D. pseudoobscura, published in 2005, with the recently sequenced genomes of D. sechellia, D. simulans, D. yakuba, D. erecta, D. ananassae, D. persimilis, D. willistoni, D. mojavensis, D. virilis and D. grimshawi. In addition, two companion manuscripts in today's Nature were contributed by researchers from the Laboratory of Cellular and Developmental Biology of the National Institute of Diabetes and Digestive and Kidney Diseases, at NIH.

The work was carried out by hundreds of scientists from more than 100 institutions in 16 countries. The sequencing of the 10 new genomes was led by Agencourt Bioscience Corp., Beverly, Mass. Other sequencing centers contributing to the sequencing were Washington University School of Medicine, St. Louis, Mo., the Broad Institute of MIT and Harvard, Cambridge, Mass., and the J. Craig Venter Institute, Rockville, Md. The sequencing centers were funded as part of NHGRI's Large-Scale Sequencing Research Network.

To the average person, one fruit fly hovering around an overripe banana looks pretty much like any other. Researchers found that, at first glance, the genomes of the various types of fruit flies appear quite similar. However, a more detailed examination reveals that only 77 percent of the approximately 13,700 protein-coding genes in D. melanogaster are shared with all of the other 11 species.

The findings suggest that these particular protein-coding genes likely evolve in the fruit fly genome as a result of adaptation to changing environments and sexual selection. For instance, the fruit fly species D. sechellia, whose population lives on the Seychelles islands in the Indian Ocean, is losing gustatory (taste) receptors approximately five times faster than other fruit fly species that generally encounter a more diverse set of foods than those available on an island.

A project leader and co-author for the studies, William M. Gelbart, Ph.D., of Harvard University in Cambridge, Mass., said "The availability of the 12 fruit fly genomes resulted in a dramatic increase in resolution allowing us to examine how evolution has fine-tuned biological processes. Our work shows that discovery power increases with the number of genomes available for comparison."

In addition to their analyses aimed at gaining a better understanding of genomic evolution, consortium scientists used the 12 fruit fly genomes to identify thousands of new genes and other functional elements. This work will bolster efforts to find all functional elements in the reference genome sequence of D. melanogaster.

"Comparing the 12 fruit fly genomes allowed us to recognize evolutionary signatures characteristic of each function. These signatures enabled us to distinguish and identify thousands of new functional elements." said Manolis Kellis, Ph.D., of the Massachusetts Institute of Technology in Cambridge, Mass., and a co-author of the Nature papers.

Specifically, researchers used the evolutionary signals to discover 1,193 new protein-coding sequences and called into question 414 sequences previously reported as protein-coding genes in the D. melanogaster genome sequence. In addition, they found hundreds of novel functional elements across the 12 fruit fly genomes, including: non-protein coding genes; regulatory elements involved in the control of gene transcription; and DNA sequences that mediate the structure and dynamics of chromosomes.

"Our analyses only represent a small portion of questions that can be answered in the context of these 12 species," said Andrew G. Clark, Ph.D., from Cornell University in Ithaca, N.Y., a co-author on the Nature papers. "Today's findings represent an important starting point for future research aimed at understanding the function of the genome features we discovered and their relevance to the human genome."

The fruit fly genome sequences and details about the information encoded by these genomes are publicly available from the NHGRI-funded FlyBase database project (http://flybase.bio.indiana.edu). Flybase is a collaboration of Harvard University, Cambridge, Mass.; Indiana University, Bloomington; and the University of Cambridge, United Kingdom. The fruit fly genome sequences are also available from NIH's National Center for Biotechnology Information (www.ncbi.nlm.nih.gov). NCBI distributes the sequence data to the European Molecular Biology laboratory's Nucleotide Sequence Database, EMBL-Bank (www.ebi.ac.uk/embl/index.html), and the DNA Data Bank of Japan, DDBJ (www.ddbj.nig.ac.jp). The 12 fruit fly species are available to the research community through the NSF-supported Tucson Drosophila Species Stock Center at the University of Arizona (http://stockcenter.arl.arizona.edu).