Researchers Uncover New Piece to the Puzzle of Human Height

Researchers Uncover New Piece to the Puzzle of Human Height

Study Suggests Connection Between Genetic Basis of Height and Arthritis

Bethesda, Md., Sun., Jan. 13, 2008 — In studies involving more than 35,000 people and a survey across the entire human genome, an international team supported in part by the National Institutes of Health (NIH) has found evidence that common genetic variants recently linked to osteoarthritis may also play a minor role in human height. The findings were released today in the advance online publication of the journal Nature Genetics.

The variants most strongly associated with height in the new genome-wide association study lie in a region of the human genome thought to influence expression of a gene for growth differentiation factor 5 (GDF5), which is a protein involved in the development of cartilage in the legs and other long bones. Rare variants in the GDF5 gene have been associated with disorders of skeletal development, and more common variants recently have been tied to susceptibility to osteoarthritis of the hip and knees in Asian and European populations.

"The common variants we identified are associated with both short stature and, as described previously, increased risk of osteoarthritis," said the study's senior author Karen L. Mohlke, Ph.D., of the University of North Carolina, Chapel Hill. "Our findings suggest a link between the genetic basis of height and osteoarthritis, potentially mediated through alterations in bone growth and development."

Dr. Mohlke and her colleagues emphasized that the new variants account for just a small fraction of the genetic basis of height, which means much more research is needed before scientists can paint a complete picture of this complex human trait.

A variety of factors, including genetics, prenatal environment and diet, interact to determine how tall someone grows. It is currently thought that genetic factors are responsible for at least 80 percent of the variation in height among people. However, the new genetic variants, together with another, recently identified height-associated genetic variant called HMGA2, account for less than 1 percent of human height variation.

Specifically, the newly identified genetic variant is associated with an average difference in height of about 0.4 centimeter (cm), or a little more than an eighth of an inch. The exact effect ranged from 0.3 cm to 1.4 cm (0.12 to 0.55 inches), depending upon the population and whether an individual has one or two copies of the "taller" version of the variant. No differences in the effect were detected between males and females, nor did the variants appear to be associated with weight or body mass index.

"Many of the genetic variants involved in height likely will have only small effects, so it's going to take a lot of work involving very large sample sets to uncover all of them," said National Human Genome Research Institute (NHGRI) Director Francis S. Collins, M.D., Ph.D., one of the study's co-authors and an investigator in NHGRI's Genome Technology Branch. "But it is very exciting to have powerful enough tools to succeed at this extremely difficult work. Our findings show how understanding the factors involved in human height may provide new insights into osteoarthritis and other musculoskeletal diseases." 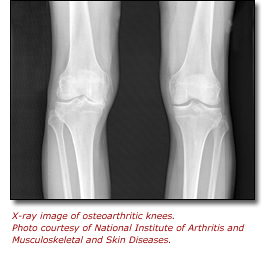 Osteoarthritis is by far the most common type of arthritis, affecting nearly 21 million Americans. The degenerative joint disease, which primarily affects cartilage, is seen mostly among older people.

The researchers speculate that genetic variants that reduce production of the GDF5 protein may affect the amount of cartilage in the spine, the proportion of limbs and/or the angles of joints, resulting in both a modest decrease in height and increased susceptibility to osteoarthritis.

To make their findings, researchers used a genome-wide association study, which is a relatively new, comprehensive strategy that utilizes the tools made possible by the sequencing of the human genome and the mapping of human genetic variation. To conduct a genome-wide association study on a quantitative trait such as height, researchers survey each participant's complete set of DNA, or genome, looking for strategically selected markers of genetic variation.

If average height differs for individuals with certain genetic variants, this indicates that something in that chromosomal neighborhood likely influences height. In this particular study, researchers initially examined the effects of more than 2 million genetic variants. The variants detected using this approach can accurately point to the region of the genome involved, but may not themselves directly influence the trait. This means researchers often need to take additional steps, such as sequencing the DNA in that particular region of the genome, to identify the exact genetic variant that affects the trait.

The completion of the map of human genetic variation, or HapMap, has fueled a surge in genome-wide association studies, with most of the increase coming in the past 10 months. Researchers around the globe have now associated more than 60 common DNA variants with the risk of more than 20 common diseases or related traits.

"Genome-wide association studies often require the skills of researchers from many different institutions and many different disciplines. By working together in a collaborative manner, we can tackle the complexities of common disease and quantitative traits far more efficiently than we could working alone," said Gonçalo R. Abecasis, D.Phil., a statistical geneticist of the University of Michigan's School of Public Health, Ann Arbor, who co-directed the analyses with Dr. Mohlke.

This latest work was accomplished as a result of innovative international partnerships with scientists and study participants. Researchers began by scanning the genomes of nearly 4,300 people from the Mediterranean island of Sardinia and more than 2,300 people from Finland. The initial findings were then validated by follow-up studies involving more than 24,000 additional individuals of European ancestry and nearly 4,000 African-American individuals.

The Sardinians were participants in the SardiNIA project, a multidisciplinary, longitudinal genetic study of complex traits and diseases in Sardinia supported by the National Institute on Aging (NIA). The Finns were participants in the Finland-United States Investigation of Non-Insulin Dependent Diabetes Mellitus Genetics (FUSION) study, which receives support from NHGRI and the National Institute of Diabetes and Digestive and Kidney Diseases (NIDDK).

"It has been exciting to see how the SardiNIA and FUSION investigators have productively combined results from a number of populations to lead us to these current insights," noted NIA Director Richard J. Hodes, M.D. "In these efforts, we must also recognize the thousands of study participants for helping to catalyze advances in our understanding of the genetic factors of age-related disease."

NIDDK Director Griffin P. Rodgers, M.D., said, "This study is an example of how an investment in studies originally designed to evaluate specific diseases, such as diabetes, can lead to diverse and unexpected findings."

The research received major support from NHGRI, NIA, NIDDK and the National Heart, Lung and Blood Institute, all of which are part of NIH.

For the FUSION group, the laboratory analysis of genetic variants was conducted by the Center for Inherited Disease Research, using funding from NIH and The Johns Hopkins University in Baltimore. For the SardiNIA group, the analysis was conducted by the ProgeNIA team of the genetic laboratory in Lanusei, Sardinia. The analysis of the Diabetes Genetics Initiative (DGI) follow-up samples was primarily supported by funding from the Novartis Institutes for Biomedical Research, Basel, Switzerland.

Also today, another NIH-supported genome-wide association study involving the FUSION, SardiNIA and DGI groups was released in the advance online publication of Nature Genetics. In that work, an international team, which included many researchers from the height study, identified seven new genetic variants associated with levels of cholesterol and other fats in the blood and confirmed 11 others.