Working on a Team: Stephanie Battle and the NIH Summer Internship Program at NHGRI

Working on a Team: Stephanie Battle and the NIH Summer Internship Program at NHGRI 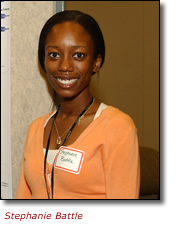 College sophomore Stephanie Battle has a family history of sickle cell disease (SCD), which gave rise to her heightened interest in the project she undertook during a 2007 summer internship at the National Human Genome Research Institute (NHGRI). Battle studied the disorder and gained exposure to other diverse, ground-breaking biomedical research as one of 40 NHGRI summer interns and more than 1,000 senior high, college, graduate and medical students participating in the National Institutes of Health (NIH) Summer Internship Program in Biomedical Research.

A biochemistry major in the University of Maryland, Baltimore County's (UMBC) prestigious Meyerhoff Scholarship Program, Battle's summer assignment placed her alongside the same bench as the team examining the genetic factors that regulate gene expression for SCD and a range of hemoglobin disorders. The goal of the research is to develop gene therapy treatments.

Battle's interest in the NIH Summer Internship Program was prompted by an information session led by Michelle Hamlet, Ph.D., training program coordinator in NHGRI's Intramural Training Office. During this session, Dr. Hamlet stressed the important research experience that trainees - even those early in their careers - could obtain by working at the NIH. "NIH - you can't get much higher than that," Battle said of her initial reaction.

When Battle expressed her interest in coming to NIH, Dr. Hamlet put her in touch with Dave Bodine, Ph.D., chief and senior investigator of NHGRI's Genetics and Molecular Biology Branch. The work that Battle was able to perform with him and other accomplished colleagues in Dr. Bodine's lab helped her expand upon the laboratory skills she had gained from her high school internship at Catholic University in Washington, D.C. "In Dr. Bodine's lab, I learned it's really fun working on a team. No matter what level we were at, we all had something to contribute," she said.

Battle, as well as many of her fellow interns, presented her research at the NIH Poster Day in August. In December, at the annual meeting of the American Society of Hematology (ASH) in Atlanta, Battle presented a poster of the work she and a postdoctoral fellow performed in Dr. Bodine's lab. "Stephanie fielded questions from leaders in the field and she did a great job answering them," said Dr. Bodine. "Many leading hematologists mistook Stephanie for a hematology fellow instead of an undergraduate." While at the ASH meeting, Battle took the opportunity to attend seminars focusing on current therapies for SCD, as well as on the latest developments in the understanding and treatment of the disease.

Over the summer, Battle made the most of an array of research seminars offered continuously across the NIH campus. "It's a great way to find out what you like and what you don't like," she said. Her experience has inspired her to start working at a UMBC lab. She plans to apply for another summer internship at NIH and hopes to eventually enroll in an M.D./Ph.D. program.