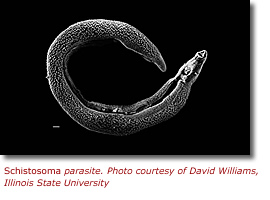 Bethesda, Md., Sun., Mar. 16, 2008 — A research team supported by the National Institutes of Health (NIH) Roadmap and the National Institute of Allergy and Infectious Diseases (NIAID) has identified chemical compounds that hold promise as potential therapies for schistosomiasis, a parasitic disease that afflicts more than 200 million people worldwide. The findings were reported today in the advance online publication of the journal Nature Medicine.

In their paper, researchers from Illinois State University (ISU) in Normal, Ill., and NIH's Chemical Genomics Center (NCGC) report that chemical compounds known as oxadiazoles can inhibit an enzyme vital to survival of Schistosoma, a group of parasitic flatworms that cause schistosomiasis. The NCGC, established in 2004 by the NIH Roadmap for Medical Research, includes a set of strategic initiatives drawing collectively from the agency-wide research resources of NIH.

"New therapeutic agents are sorely needed if we hope to ease the burden of schistosomiasis on the world's health," said NIH Director Elias A. Zerhouni, M.D. "These findings exemplify what academic researchers can accomplish with access to translational infrastructure and technologies that have previously been beyond their reach."

Schistosomiasis, also known as bilharzia or snail fever, affects an estimated 207 million people, most of whom live in developing nations in tropical areas. About 20 million of those people are seriously disabled due to severe anemia, diarrhea, internal bleeding and/or organ damage. In addition, another 280,000 die of the disease each year.

People become infected with Schistosoma when they wade, swim or bathe in fresh water inhabited by snails, which serve as the worms' intermediate hosts. The microscopic worms enter the human body by boring through the skin and migrate into the blood vessels that supply the intestinal and urinary systems. After the worms mature and reproduce, their eggs are eliminated in human urine and feces. If human waste contaminated by worm eggs finds its way into fresh water, the cycle begins again.

Currently, people living in more than 70 tropical nations require annual or semi-annual drug treatment to rid their bodies of the parasite. Since the 1980s, praziquantel has effectively been the sole drug used for this purpose. Public health experts are concerned that the Schistosoma parasites will become resistant to praziquantel and the drug will lose its effectiveness, as has been the case for agents used to combat many other infectious diseases such as malaria and tuberculosis.

"The search for new drugs for schistosomiasis is imperative if we are to control this devastating disease that exacts an enormous toll, both in terms of human suffering and economic development," said NIAID Director Anthony S. Fauci, M.D.

The new research, which was conducted with Schistosoma maintained in laboratory conditions, shows that an oxadiazole compound was effective in inhibiting a crucial worm enzyme, called thioredoxin glutathione reductase (TGR). Furthermore, in tests of laboratory mice infected with Schistosoma, this compound killed the parasite in all of its stages, from larva to adult. The results exceeded all benchmarks set by the World Health Organization for potential new compounds to treat schistosomiasis. Importantly, the researchers also showed that the compound was active against all three major species of Schistosoma worms that infect humans.

"This builds upon my lab's previous findings that Schistosoma worms survive in the host due to a protective enzyme TGR. By teaming with NCGC, we were able to move our research one step closer to the clinic by identifying a class of compounds that specifically target that enzyme," said the study's lead researcher, David L. Williams, Ph.D., a professor of biology at ISU and NIAID grantee. "Still, much remains to be done. Our ultimate goal is to see our basic biological findings translated into help for people with schistosomiasis."

The TGR project submitted to NCGC by Dr. Williams' group was the first one officially accepted for screening by the NIH Roadmap Molecular Libraries Initiative. The results of that collaboration underscore the value of a new paradigm established by the NCGC, which is administered by the National Human Genome Research Institute (NHGRI). The high-tech center offers academic researchers, such as the ISU team, the opportunity to tap into a robotic system for quickly screening large numbers of chemical compounds for biological activity.

"Chemical genomic advances are being used to develop a new approach to a parasite that has afflicted countless generations of humankind," said NHGRI Director Francis S. Collins, M.D., Ph.D. "This study showcases the beauty of high-throughput chemical screening for biomedical applications."

NCGC Director Christopher P. Austin, M.D., who is a co-author of the Nature Medicine paper, said "Our center has brought pharmaceutical-scale chemical screening, informatics and medicinal chemistry to bear on neglected diseases that affect millions globally, but are not worked on by the pharmaceutical industry since they cannot generate the needed financial returns. This study demonstrates the wonderful things that can happen when the NCGC's scientific capabilities and infrastructure are combined with the biological expertise of individual academic investigators."

NIAID is a component of the NIH. NIAID supports basic and applied research to prevent, diagnose and treat infectious diseases such as HIV/AIDS and other sexually transmitted infections, influenza, tuberculosis, malaria and illness from potential agents of bioterrorism. NIAID also supports research on basic immunology, transplantation and immune-related disorders, including autoimmune diseases, asthma and allergies. News releases, fact sheets and other NIAID-related materials are available on the NIAID Web site at www.niaid.nih.gov.

NCGC is an ultra-high-throughput screening center that generates chemical probes of gene and cell functions in health and disease, and catalyzes for drug development for neglected rare and orphan diseases. It is part of the NIH Roadmap for Medical Research. The Roadmap is a series of initiatives designed to pursue major opportunities and gaps in biomedical research that no single NIH institute could tackle alone, but which the agency as a whole can address to make the biggest impact possible on the progress of medical research. Additional information about the NIH Roadmap can be found at www.nihroadmap.nih.gov.