Please note: In August 2008, the NIH Intramural Center for Genomics and Health Disparities (NICGHD) described in this news release was renamed as the Center for Research on Genomics and Global Health. 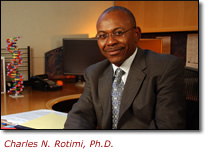 Bethesda, Md., Mon., Mar. 17, 2008 — The National Institutes of Health (NIH) today announced the establishment of the NIH Intramural Center for Genomics and Health Disparities (NICGHD), a new venue for research about the way populations are impacted by diseases, including obesity, diabetes and hypertension. NICGHD will employ a genomics approach, collecting and analyzing genetic, clinical, lifestyle and socio-economic data to study a range of clinical conditions that have puzzled and troubled public health experts for decades. The trans-NIH center will be directed by internationally renowned genetic epidemiologist Charles N. Rotimi, Ph.D., former director of the National Human Genome Center at Howard University.

"This new center will be an NIH resource to help move research related to the complex factors underlying health disparities into the 21st century," said NIH Director Elias A. Zerhouni, M.D. "Synergy among the center's genetic and genomic researchers and disease experts in existing NIH research programs will advance our understanding of health disparities for the benefit of minority groups and all Americans."

"The priority of our center will be to understand how we can use the tools of genomics to address some of the issues we see with health disparities," Rotimi said. "The availability of tremendous expertise and the remarkable research infrastructure at NIH will make our research activities more robust and will allow us to tackle questions in ways that were not feasible in the past."

Genomic research has established that the genomes of any two individuals are very similar. However, the subtle genomic differences that remain contribute to unique biological traits, such as hair and eye color, as well as to the susceptibility to diseases and individual responses to drugs. Additional factors contribute to health and disease, including diet, exercise routines and access to medical care. Genetic epidemiologists study genetic differences in combination with environmental factors to assess disease susceptibility and resistance among individuals and population groups.

NICGHD will be established within the NIH Office of Intramural Research and administered by the National Human Genome Research Institute (NHGRI). Additional support for the center will come from the NIH Office of the Director, the National Institute of Diabetes and Digestive and Kidney Diseases (NIDDK) and the Center for Information Technology. The research activities of NICGHD will take place on the NIH Bethesda campus.

Building upon his previous research, Rotimi will continue efforts to develop genetic epidemiology models and population-genetics research projects that provide insights about the interrelationships of culture, lifestyle, genetics, genomics and health. His research explores patterns and determinants of common complex diseases that affect populations both living in Africa today and those that are part of the African diaspora.

Rotimi, who also has been appointed senior investigator in the Inherited Disease Research Branch in NHGRI's Division of Intramural Research, has been extensively involved in a number of genetic epidemiology projects that are being conducted in several African countries, China and in the United States. These projects have included the Africa America Diabetes Mellitus study; the Howard University Family Study; the Genetics of Obesity in Blacks Study; the Black Women Health Study; Consent in Genetic Research: An International Trial; the Engagement of African Communities for the International HapMap Project; and the Genetic Basis of Podoconiosis, a foot-disfiguring disease impacting some who work barefoot in volcanic soils. These efforts have provided him the necessary expertise for assuming the directorship of NICGHD.

An additional focus of NICGHD will be to provide training opportunities for students and established scientists from developing countries and from minority groups in the United States.

A high-resolution photo of Dr. Rotimi is available at: http://www.genome.gov/dmd/img.cfm?node=Photos/People/Rotimi_Charles&id=79217

NHGRI and NIDDK are among the 27 institutes and centers at the NIH, an agency of the Department of Health and Human Services. The NHGRI Division of Intramural Research develops and implements technology to understand, diagnose and treat genomic and genetic diseases. Additional information about NHGRI can be found at its Web site, www.genome.gov. The NIDDK conducts and supports research in diabetes and other endocrine and metabolic diseases; digestive diseases, nutrition, and obesity; and kidney, urologic and hematologic diseases. Additional information about NIDDK can be found at www.niddk.nih.gov.

The National Institutes of Health (NIH) — "The Nation's Medical Research Agency" — includes 27 Institutes and Centers and is a component of the U. S. Department of Health and Human Services. It is the primary federal agency for conducting and supporting basic, clinical, and translational medical research, and it investigates the causes, treatments, and cures for both common and rare diseases. For more information about NIH and its programs, visit www.nih.gov.