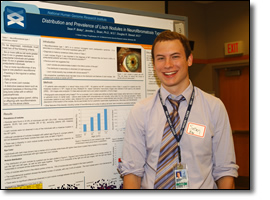 Boley participated in the NIH Summer Internship Program in Biomedical Research and worked among researchers in the Genetics Disease Research Branch of the National Human Genome Research Institute's (NHGRI) Division of Intramural Research. He studied neurofibromatosis type-1 (nf1), a genetic condition commonly accompanied by small, benign tumors on the iris called lisch nodules; the disease is also characterized by changes in skin coloring and the growth of tumors along nerves in the skin, brain and other parts of the body. Boley worked under Douglas R. Stewart, M.D., who is part of NHGRI's Physician-Scientist Development Program and is the principal investigator leading the nf1 study.

After photographing the irises of nf1 patients at the NIH Clinical Center, Boley took his recordings, along with others done by Dr. Stewart, to make a map of lisch nodule occurrences. This map could, in turn, be used to confirm theories about the symptom's ultraviolet-light connection.

Boley was impressed by the dual role NIH scientists play in translational research. "I had never heard of researchers who spend half their time seeing patients and the other half using the samples they collect to find answers," he said. "It's not so detached from the realities of the disease."

A senior in pre-medicine and chemistry at Vassar University, Boley, 21, came across the NIH summer internship program online. After applying, he used a Vassar database to search alumni for an NIH contact. He found Dr. Stewart there and e-mailed the researcher directly to convey his hopes of participating in the summer program.

"Genetics wasn't something I was incredibly interested in beforehand; I came to work in a lab at NIH and see patients," Boley said. "After seeing how vital a role genes play in practically every disease, I know how fortunate I was to be able to get real research experience at NHGRI."

Dr. Stewart was receptive. "Lots of people had helped me during my own career, so I figured it was the least I could do," he said. "I don't underestimate undergraduates. A well-motivated college student can be really productive. Sean was a great example of that."

To others applying for this selective summer internship program, Boley stresses the impact of making a personal connection - reach out to an investigator rather than hope your application is chosen. Another insider tip: be open-minded. With no previous plans of pursuing genetics, Boley said he may continue in the field or adopt the translational model for his own research.