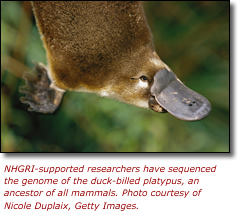 Bethesda, Md., Wed., May 7, 2008 — The first analysis of the genome sequence of the duck-billed platypus was published today by an international team of scientists, revealing clues about how genomes were organized during the early evolution of mammals. The research was supported in part by the National Human Genome Research Institute (NHGRI), part of the National Institutes of Health (NIH).

Fans of TV nature shows will remember that the duck-billed platypus, native to Australia, is one of the few mammals that lay eggs. However, platypus peculiarity does not end there. For example, these odd animals boast what looks like a duck's bill, which houses an electrosensory system used when foraging for food underwater, and a thick fur coat to adapt to the icy waters in which it resides. Males also possess hind leg spurs that can deliver venom powerful enough to wound territorial competitors during mating season, or cause excruciating pain in other mammals, including humans.

"At first glance, the platypus appears as if it was the result of an evolutionary accident. But as weird as this animal looks, its genome sequence is priceless for understanding how fundamental mammalian biological processes have evolved," said Francis S. Collins, M.D., Ph.D., director of NHGRI. "Comparisons of the platypus genome to those of other mammals will provide new insights into the history, structure and function of our own genome."

In a paper published in today's issue of the journal Nature, researchers analyzed a high-quality draft genome sequence of Glennie, a female platypus from Australia. The consortium included scientists from the United States, Australia, England, Germany, Israel, Japan, New Zealand and Spain. Sequencing of the platypus genome was led by the Genome Sequencing Center at Washington University School of Medicine in St. Louis, a part of NHGRI's Large-Scale Sequencing Research Network.

Once the sequence was produced, researchers began comparing the genome of the platypus, whose ancestors split from the rest of mammalian lineage some 166 million years ago, with the well-characterized genomes of the human, mouse, dog, opossum and chicken, as well as the draft genome sequence of the green anole lizard. The chicken genome was chosen because it is descended from the ancestral group of egg-laying animals, including extinct reptiles, who passed on much of their DNA to animals like the platypus. Scientists were particularly interested in finding features within the platypus genome that could explain the odd mix of characteristics seen in the platypus: those that were more like reptiles, birds and mammals.

The team found that the platypus genome contains about the same number of protein-coding genes as other mammals — approximately 18,500. The platypus also shares more than 80 percent of its genes with other mammals whose genomes have been sequenced. Next, researchers combed the platypus genome looking for genetic evidence of sequences unique to platypuses that have been lost from mammalian genomes. Scientists were also eager to find out what characteristics of the platypus were linked at the DNA level to reptiles or mammals.

"The mix of reptilian, mammalian and unique characteristics of the platypus genome provides many clues to the function and evolution of all mammalian genomes," said Richard K. Wilson, Ph.D., director of Washington University School of Medicine's Genome Sequencing Center and the paper's senior author. "Now, we'll be able to pinpoint genes that have been conserved throughout evolution, as well as those that have been lost or gained."

The female platypus lays eggs, a reptilian characteristic, yet also produces milk to nourish its young, which is a mammalian characteristic. Interestingly, the platypus genome harbors both reptilian and mammalian genes associated with egg fertilization. However, researchers discovered that, like other mammals, the platypus genome contains a tightly clustered set of genes that produce the casein proteins that make up milk.

A good sense of smell is something mammals have in common. Compared to most mammals, chickens and lizards have a relatively poor complement of odorant receptor genes responsible for their ability to detect smells. Interestingly, the platypus has about half as many odor receptors as do the mouse and other mammals. However, the researchers also found that the platypus genome has experienced an expansion in the genes that code for a particular type of odor receptor, called a vomeronasal receptor. Researchers think the expansion of this particular set of genes may be involved in the ability of the platypus to detect odors during underwater foraging.

Researchers also found that genes related to the immune system of the platypus are very similar to those of other mammals, with a few key differences. For example, the platypus genome contains expansions in the gene family that codes for a microbe-fighting peptide called cathelicidin. Primates and rodents have only a single copy of the cathelicidin gene. Scientists think that the expansion of this gene family in the platypus may be involved in boosting the immune system of their very immature offspring, which hatch very developmentally immature. Scientists postulate that the microbe-fighting peptide may have been less critical for other mammals, whose offspring spend relatively long periods of time developing within the womb and are born at a more advanced stage of development.

Scientists were also eager to find out how venom production became a part of the platypus genome. When researchers began analyzing the genetic sequences responsible for venom production in the male platypus, they made a surprising finding. They discovered that venom produced by the male platypus arose from duplications in certain genes over the course of evolutionary time that had been passed on from ancestral reptile genomes. The reptilian lineage displays a similar duplication of venom genes, but that duplication appears to have occurred independently during the evolution of reptiles, giving them similar powers to produce venom.

"This genome provides a unique perspective on what the genomes of our earliest mammalian ancestors may have looked like. It is fascinating that what we think of as being reptile-like and mammal-like features can co-exist in the same genome." said Adam Felsenfeld, Ph.D., who heads the Comparative Sequencing and Analysis Program in NHGRI's Division of Extramural Research.

To download high-resolution photographs of a platypus, go to www.genome.gov/dmd/img.cfm?node=Photos/Animals/Platypus_duck_billed_Getty&id=79095.

For more information on comparative genomic analysis, go to: www.genome.gov/11509542/comparative-genomics-fact-sheet/.