Statement By Michael O. Leavitt, Secretary of Health and Human Services- On the Resignation of Dr. Francis Collins

This page has been archived and is provided for historical reference purposes only. The content and links are no longer maintained and may now be outdated.

Statement By Michael O. Leavitt, Secretary of Health and Human Services
On the Resignation of Dr. Francis Collins 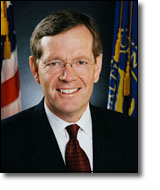 It would be difficult to exaggerate the scientific accomplishments or the exceptional leadership qualities of Francis Collins. Francis was a discoverer of many of the early genes behind diabetes and cystic fibrosis. He was one of the early drafters of the human genetic map, and he led the Human Genome Project to its completion in 2003.

With those accomplishments, and with his continuing vision and leadership, he stands as a godfather for the flood of new discovery that is transforming our understanding human biology today. His vision of a future in which medical care can be much more precise and effective through our growing understanding of human genomics is the guiding light of our current quest for truly personalized medicine.

Francis has also had the unique ability and wisdom to look at genomics and human biology through the public's eye. His work is characterized by its consistent attention to the important ethical, legal and social implications that are involved. He was a leader in the campaign for legislation to protect against genetic discrimination, and the Genetic Information Non-discrimination Act signed into law by President Bush last week is an important testament to his work.

This nation is indebted to him and his pioneering work. He has been an admired teacher at NIH and a national scientific leader of the first rank. We take pride in his wide achievements while he has been at the National Institutes of Health, and we know how much he will be missed at the institute he helped bring into existence.

We thank him and wish him well.