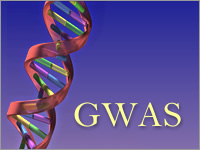 Bethesda, Md., Thurs., July 17, 2008 — The National Human Genome Research Institute, one of the National Institutes of Health, today announced grants expected to total about $31 million over the next four years for research aimed at gaining a better understanding of how specific genetic variants act to influence the risk of diabetes, heart disease, cancer and other common diseases.

Over the past two years, genome-wide association studies (GWAS) have allowed researchers to uncover more than 300 novel genetic variants associated with common diseases. However, the discovery of genetic variants through GWAS research represents just the first step in the challenging process of piecing together the complex biological picture of common diseases. To help speed the process, NHGRI is supporting new research in existing large epidemiology studies, all with a rich range of measures of health and potential disease, and many with long-term follow-up.

The focus of the new research is on how genetic variants initially identified through GWAS research are related to a person's biological and physical characteristics, such as weight, cholesterol levels, blood sugar levels or bone density. Scientists will also examine how non-genetic factors, such as diet, medications and smoking, may interact with genetic factors or each other to influence health outcomes.

"By drawing on the combined strengths of genomics and epidemiology, this innovative program will create a much-needed research resource. The data it generates will save researchers around the world considerable time and energy, accelerating our ongoing efforts to translate genetic findings into new strategies for improving human health," said NHGRI Director Francis S. Collins, M.D., Ph.D.

The information generated by this program will help guide other genomic and epidemiologic studies by defining the potentially wide-ranging effects of genetic differences among people. Additionally, it will lay the groundwork for laboratory experiments in cultured cells and other model systems to identify the precise biological mechanism affected by each genetic variant and how it interacts with other biological and environmental factors. Such information is vital to developing more individualized ways of preventing, diagnosing and treating common diseases.

"These investigators and cohorts were each chosen for their potential to provide important clues about how specific genetic variants might contribute to diseases like diabetes or cancer, which are a burden to public health," said Teri Manolio, M.D., Ph.D., director of the NHGRI Office of Population Genomics **. "The investigators will collaborate to establish criteria and prioritize specific variants to test within their populations. Our plan is to investigate about 100 genetic variants in 10,000 participants each year for four years."

Below is a list of the NHGRI grantees, along with their estimated funding levels over four years, and the cohorts involved.

The participants in many of the cohorts have been followed closely for years and information about each patient has been rigorously collected and validated by medical experts. This includes information such as medical histories, health exams, biomarkers from blood tests, blood pressure, medications, behaviors/lifestyles and nutrition. In addition, each cohort has recruited a diverse range of U.S. populations, including Caucasians, African-Americans, Hispanics, American Indians, and Asian and Pacific Islanders.

Group-level data generated from each study will be deposited in dbGaP, the public database of Genotypes and Phenotypes (dbGaP) operated by the National Library of Medicine's National Center for Biotechnology Information.

NHGRI is one of 27 institutes and centers at the NIH, an agency of the Department of Health and Human Services. The NHGRI Division of Extramural Research ** supports grants for research and for training and career development at sites nationwide. Additional information about NHGRI can be found at its Web site, www.genome.gov.

The National Institute of Mental Health (NIMH) mission is to reduce the burden of mental and behavioral disorders through research on mind, brain, and behavior. More information is available at the NIMH Web site [nimh.nih.gov].