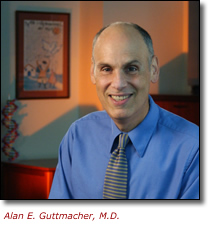 Alan Edward Guttmacher, M.D., a nationally recognized pediatrician and medical geneticist who has played major leadership roles at the National Human Genome Research Institute (NHGRI) for nearly a decade, became Acting Director of NHGRI on Aug. 2, 2008. He replaces Francis S. Collins, M.D., Ph.D., who stepped down after 15 years at the helm of NHGRI to pursue other professional opportunities.

"Dr. Guttmacher has provided excellent leadership for the institute, as well as participating in many trans-NIH efforts. His service as Acting Director at NHGRI will ensure a seamless transition," said National Institutes of Health (NIH) Director, Elias A. Zerhouni, M.D., in naming Dr. Guttmacher to the post. "I am sure that you will join me in offering thanks and good wishes to Francis, as well as offering Alan full support as he takes on the additional responsibilities of guiding NHGRI."

Dr. Collins agreed, saying, "Alan is an exceptional medical geneticist and served most ably as NHGRI's Deputy Director for the last six years. So, I leave the institute in good hands until a permanent director is selected."

Since joining NHGRI, Dr. Guttmacher has served as the institute's Senior Clinical Advisor to the Director and as the Director of its Office of Policy, Communications and Education. He currently serves as its Deputy Director, a position he will continue to hold while carrying out his new duties and responsibilities as Acting Director. NIH plans to conduct a broad search for a permanent director of NHGRI, but details of that search process remain to be finalized.

"Today is an extraordinary time for the field of genomic research. We are blessed with unparalleled scientific opportunities," Dr. Guttmacher said. "NHGRI and its collaborators, both at the NIH and throughout the biomedical research community, are moving ahead with our historic efforts to understand the intricacies of the human genome and how it functions. Our ultimate goal is to bring the promise of genomic science to health care."

Since its inception in 1989, NHGRI has established itself as a world leader in the ongoing quest to explore the human genome, which is the complete set of DNA in the human body. In April 2003, researchers led by NHGRI successfully completed the Human Genome Project more than two years ahead of schedule. That landmark effort determined the order, or sequence, of the 3 billion "letters" in our DNA instruction manual. Today, NHGRI supports many research initiatives that are building upon the foundation laid by the Human Genome Project.

Upon becoming NHGRI's Senior Clinical Advisor to the Director in 1999, Dr. Guttmacher quickly established a dialogue with health professionals and the public about the health and societal implications of the Human Genome Project. He also played a critical role in guiding the National Coalition for Health Professional Education in Genetics, which helps to educate physicians, nurses, physician assistants and many other health-care professionals about advances in human genetics and their applications to health and health care.

In 2002, Dr. Guttmacher was named Deputy Director of NHGRI, a position in which he oversees strategic planning for the institute and helps to oversee the institute's efforts to advance genome research, integrate the benefits of genome research into health care, and explore the ethical, legal and social implications of human genomics. Among his areas of expertise is the development of new approaches for translating the findings of the Human Genome Project into better ways of diagnosing, treating and preventing disease. 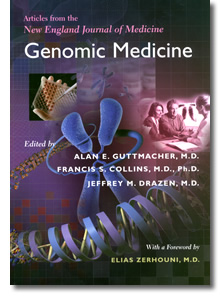 In 2003, Dr. Guttmacher, along with Dr. Collins, co-edited a series for The New England Journal of Medicine about the application of advances in genomics to medical care. That series was later turned into a book, entitled Genomic Medicine, published in 2004 by The Johns Hopkins University Press.

In addition to his involvement in spreading the word of genomics among health professionals, Dr. Guttmacher is instrumental in NHGRI's efforts to reach out to the public. He has overseen NIH's involvement in The U.S. Surgeon General's Family History Initiative, 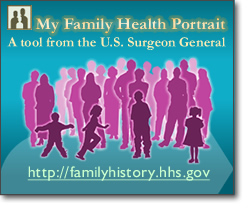 an effort to encourage all Americans to learn about and use their families' health histories to improve their health.

The greatest challenge facing NHGRI today, according to Dr. Guttmacher, is how to prioritize among the many superb ideas and exciting possibilities that exist in genome research. "NHGRI now faces, and, in fact, has helped to create, an abundance of scientific opportunities. Among these are efforts to understand more fully how the genome functions, to follow up on the outpouring of information being generated by genome-wide association studies, and, of course, to apply our growing knowledge of the genome to improve human health," he said. "Also, as has always been the case, there are important opportunities - indeed, responsibilities - to explore the ethical, legal and social implications of genome research."

Before coming to NHGRI, Dr. Guttmacher directed the Vermont Regional Genetics Center at the University of Vermont College of Medicine, where he launched a series of public health genetics programs and was the principal investigator for the nation's first statewide effort to involve the public in discussion of genetics and its ethical, legal and social implications. He also led the Vermont Newborn Screening Program, was the founding director of the only pediatric intensive care unit in the state, co-directed the Vermont Cancer Center's Familial Cancer Program and served as a tenured associate professor of pediatrics and medicine at the University of Vermont.

Shortly after arriving at NHGRI in 1999, the veteran physician suffered a major heart attack that not only provided him with new perspectives on health and life, but with new insights on what patients go through in dealing with health issues.

"I think my experience as a physician - and, importantly, as a patient - does shape who I am and how I think about NHGRI and its work. I am intensely aware that we are part of the National Institutes of Health. Our mission is not simply to advance knowledge, as desirable as that may be, but to improve health," he said. "My training and experiences as a physician have also inculcated in me the scientific method of analyzing situations. This has given me a lot of practice in focusing fully on the problem in front of me, and then moving on rapidly to the next issue - a useful trait not only in helping patients, but in leading almost any institution."

Born in Baltimore in 1949, Dr. Guttmacher received an A.B. cum laude in Social Relations from Harvard in 1972 and an M.D. from Harvard Medical School in 1981. He then went on to complete an internship and residency in pediatrics at Children's Hospital in Boston, and, in 1985, earned a two-year National Research Service Award from the U.S. Public Health Service as a fellow in medical genetics at Children's Hospital Boston and Harvard Medical School. Among his many honors are election to the medical honor society, Alpha Omega Alpha; and to the Institute of Medicine. He is a fellow of the American Academy of Pediatrics and the American College of Medical Genetics.

Dr. Guttmacher is married to Brigid Guttmacher and lives in the Capitol Hill neighborhood of Washington, D.C. His hobbies and interests include reading, running and an occasional trip back to the Green Mountains of Vermont for fly fishing or kayaking. Back in his high school days, he was an outstanding lacrosse player who earned a berth on the All-Maryland team. After graduating from college, he spent some time working on a political campaign, laboring on a dairy farm near Ottawa, Ill., and teaching middle school outside Baltimore, before deciding to pursue a career in medicine.

Dr. Guttmacher is not the only Alan Guttmacher widely known for his achievements in the realm of biomedical research, education and policy. His late uncle, Alan Frank Guttmacher, M.D., was a distinguished obstetrician-gynecologist, author and leader in reproductive rights. The Guttmacher Institute, a non-profit research organization with offices in New York and Washington, was named in honor of Alan F. Guttmacher.