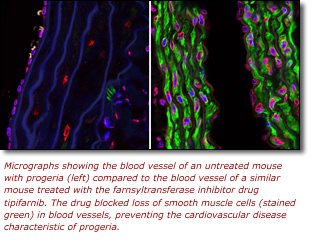 In a study published in the Oct. 6 early online edition of the Proceedings of the National Academy of Sciences, a team led by Francis S. Collins, M.D., Ph.D., of the National Human Genome Research Institute (NHGRI), and Elizabeth G. Nabel, M.D., director of the National Heart, Lung and Blood Institute (NHLBI), describes its effort to use transgenic mice to identify and test potential therapies for children with Hutchinson-Gilford progeria syndrome.

There currently are no treatments for progeria, which is estimated to affect about one child in 4 million. At birth, children with progeria appear normal. But soon growth slows, and the children begin to show signs of accelerated aging, such as hair loss, wrinkled skin and loss of body fat. The most lethal damage, however, occurs within the children's major blood vessels. The children develop premature cardiovascular disease, which typically leads to death from heart attack or stroke at about the age of 13.

Building upon its past experiments in cells and mice, the NIH-led team examined the effects of an experimental cancer drug, tipifarnib, in a strain of mice genetically engineered to develop cardiovascular damage similar to that seen in progeria patients. Tipifarnib belongs to a class of drugs known as farnesyltransferase inhibitors (FTIs), which are being tested in people with myeloid leukemia, neurofibromatosis and other conditions. The team had previously found that FTI drugs could reverse structural abnormalities in skin cells taken from progeria patients and grown in the laboratory.

"This approach worked much better than we thought it would. Not only did this drug prevent these mice from developing cardiovascular disease, it reversed the damage in mice that already had disease," said the study's senior author, Dr. Collins, who is the former director of NHGRI and who continues to conduct research as a special volunteer in the Genome Technology Branch of NHGRI's Division of Intramural Research.

Researchers emphasized that more work needs to be done to determine whether FTI drugs will reverse progeria-associated cardiovascular disease in humans the same way they do in mice. In children suffering from progeria, the cardiovascular disease process often remains relatively stable until late in life, when it dramatically accelerates.

"If these drugs are found to have similar effects in children, this could mark a major breakthrough for treating this devastating disease," said NHLBI's Dr. Nabel, who was a co-author of the study. "In addition, these findings shed light on the potential role of FTI drugs to treat other forms of coronary artery disease."

In 2007, researchers led by Mark Kieran, M.D., Ph.D., at the Dana-Farber Cancer Institute in Boston launched a clinical trial of another FTI drug, lonafarnib, in 28 progeria patients, ranging in age from 3 to 15, from 16 countries. Results of that study are not expected for at least a year.

Earlier this year, in experiments involving a different type of mouse model for progeria, a group of researchers from Spain and France reported that a combination of statin and bisphosphonate drugs slowed development of the visible symptoms of aging and extended life spans in the animals. Both drugs act upon the same biological pathway as FTI drugs.

While progeria affects only a few dozen children worldwide, efforts aimed at untangling the biological roots of this rare disease may prove valuable in understanding the human aging process in general. "What we learn through studies of rare genetic disorders often has implications for more common conditions," said NHGRI Scientific Director Eric D. Green, M.D., Ph.D. "For example, a growing body of evidence indicates that all people produce small amounts of the mutant protein found in progeria patients, and that this protein may play roles in aging or longevity."

In addition to NHGRI and NHLBI, the team that conducted the most recent study included researchers from Emory University School of Medicine, Atlanta, and CVPath Institute, Inc., Gaithersburg, Md.

For more information about progeria, go to http://www.genome.gov/11007255/learning-about-progeria/.

A high-resolution photograph contrasting the coronary arteries of treated and untreated mice is available at: www.genome.gov/dmd/img.cfm?node=Photos/Technology/Cells%20and%20biological%20pathways&id=79199.

A high-resolution photograph of a child with progeria is available at www.genome.gov/dmd/img.cfm?node=Photos/People/People%20Outside%20NHGRI&id=79252.

A photograph of cells from progeria patients is available at www.genome.gov/dmd/img.cfm?node=Photos/Technology/Cells and biological pathways&id=85351.

NHGRI is one of 27 institutes and centers at the NIH, an agency of the Department of Health and Human Services. The NHGRI Division of Intramural Research develops and implements technology to understand, diagnose and treat genomic and genetic diseases. Additional information about NHGRI can be found at its Web site, www.genome.gov.

NHLBI plans, conducts, and supports research related to the causes, prevention, diagnosis, and treatment of heart, blood vessel, lung, and blood diseases; and sleep disorders. The Institute also administers national health education campaigns on women and heart disease, healthy weight for children, and other topics. NHLBI press releases and other materials are available online at www.nhlbi.nih.gov.