Darwin at 200: How Geneticists View Him Today

Darwin at 200: How Geneticists View Him Today

February 12, 2009, marked the 200th birthday of Charles Darwin (1809-1882) and the 150th year since publication of his seminal work, On the Origin of Species. The renowned 19th century naturalist made observations on plant and animal life that set science on a new course, introducing evolution as the unifying concept in all of genetics and biology. Students of U.S. history will note that the date is also the 200th birthday of U.S. President Abraham Lincoln.

The National Human Genome Research Institute (NHGRI) observed Darwin's life and accomplishments at events at the NIH's Bethesda campus and at the Smithsonian Institution's National Museum of Natural History. Hear what geneticists at NHGRI have to say about Darwin's ideas, science and legacy.

Watch Darwin at 200: How Geneticists View Him Today 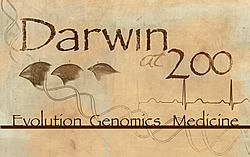 The Darwin @ 200 Anniversary Celebration was a program offered by NHGRI and the Smithsonian Institution's National Museum of Natural History. High school students from the Washington metropolitan region gathered for a program featuring a distinguished panel of speakers on a variety of topics, from historical perspectives of Darwin, to evolution and medicine.

Among the featured speakers wer paleoanthropologist Donald C. Johanson, who discovered fossils of early hominid species, including the skeleton of a 3.5 million-year-old female hominid, known as Lucy.

NIH Clinical Center is featuring photographs of the Galapagos Islands in an exhibit running now through February 26, 2009. Photos of the island where Darwin conducted essential fieldwork, with its unique and diverse flora and fauna, were submitted by NIH employees and patients, as well as photographers from the community. NHGRI Scientific Director Eric Green, M.D., Ph.D. is among the NIH photographers whose work is now on display in the East Gallery and East Alcove Gallery on the first floor of the Mark O. Hatfield Clinical Research Center, NIH Campus, Bethesda, Md.